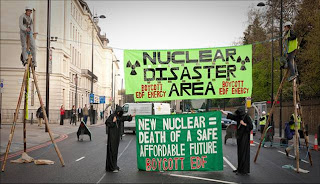 We've been sent a press release from an anti-nuke group, variously calling themselves Kick Nuclear, Stop Nuclear Power UK and Boycott EDF, with jolly photos endearingly provided by Mini Mouse. (If I hear Monsieur Rivaz say that the largesse he demands from government and electricity consumers is 'not a subsidy' one more time, I may very well join Boycott EDF myself.)

Anyway, they blocked Grosvenor Place for a while today (EDF now occupies Enron's old offices there), until the Old Bill moved them on.

I'm sorry to say, they really haven't got the hang of this yet. Their French confrères manage to turn out 3,600 for protests: but the standard is set by the good old Germans and their long-running Atomkraft? Nein Danke! which is enjoying something of a revival as all the ageing hippies reach retirement with time on their hands to re-live golden moments of yore.

The Germans it was who mustered 60,000 (sic) the very day after the first trouble at Fukushima, to surround a nuke at Neckarwestheim near Stuttgart. They regularly block trains carrying nuclear waste, ten thousand people at a time, forcing the various German regional police forces to contribute 20,000 men to a flying column to clear the tracks. We've reported before on the Battle of Stuttgart Station: these massed legions of teutonic Greens are quite bonkers, and seemingly out of control.

So, Mini Mouse & your EDF-boycotting friends, you've a way to go yet. Keep it non-violent; come up with a catchy chant involving rejection of subsidies and Crapper Huhne's electricity market 'reforms'; and who knows who might join you next time around, eh ?

Two-four, two-four, say NO to the carbon floor !

ND, out of interest, if we put your cunning 'free market' into effect without all the subsidies, cap'n'trade, carbon taxes, implicit sub's for nukes and explicit subs for loads of greenie nonsense, would there be any economic case for nukes?

I mean, assuming a nuke operator were forced to take out catastrophic event insurance (being an inestimably small probability x infinitely large number for possible losses), would anybody do it?

And how would you deal with the NIMBYs (whereby I'd guess that anybody within a hundred miles is directly at risk, no matter how small the risk and how irrationally people cope with risks - i.e. compare number of road deaths since WW2 with number of nuclear-related deaths).

(PS, from the glossary of nuclear terms: keV = one thousand electron volts)

Mark - easy: an extension of the process followed by oil producers

1. they have a forecast of oil
prices (or some general view that they will be 'high enough' for a return on their investment - since oil-price hedges aren't available very far forward)

2. they are not in the habit of receiving subsidies so they don't bother to ask for them

3. they have ways of estimating the costs (this often includes very large decommissioning & clean-up liabilities, esp. offshore) & together with 1. above, they either get on with it or they don't

4. they are good engineers & have a decent record in all this, so govts etc, working at arm's length but fairly cooperatively, ensure they can buy licences, planning consents etc etc for what they need; & impose various environmental obligations & taxes, which vary over time but generally get progressively stricter, even sometimes via retrospective legislation: the oil co's know & expect this (see 3 above), & take it in their stride

5. sometimes this goes wrong but mostly it goes right

6. amazingly, private $$$ are available on a massive scale, without subsidy*, for epic & gigantic developments e.g. the North Sea. This is because PEOPLE NEED OIL.

(* there are sometimes tax breaks but that's not quite the same)

Now - PEOPLE ALSO NEED ELECTRICITY and, over time, the price of electricity has broadly followed the price of oil

SO: the same people who are willing to risk their $$$ on mega oil projects could, in the right circumstances, be willing to do the same with nukes

it is impossible at the moment to tell whether anyone would do nukes without subsidy, because they have never needed to confront this question - my observation is that every bugger in the electricity industry has decided that if they go on investment-strike they will be bunged a sub (I even saw Centrica announcing that "if the government wants any more investment in gas storage they will have to invent a new subsidy" - it's despicable, the merest hostage-taking)

this being so, how can anyone tell if there is an economic case ? but - people REALLY do need electricity, the marginal utility- value of which in civilised societies is almost infinite, & certainly more than oil per se ... this is a good starting-point UNLESS, of course - haha! - there are in fact more economic ways of supplying our electricity securely & relatively cleanly, which is what I suspect (but cannot prove for the reason above) - let's face it, the subsidy-demanding behaviour of EDF et al is strongly consistent with them having reached the same conclusion, n'est-ce pas?

(BTW if catastrophic event insurance is too costly for them it is too costly for all of us: I don't accept this 'ah, but govt has access to cheaper capital' guff - it's the excuse for too much sloppy statist thinking)

obviously it behoves govts to solve the planning and NIMBY problems, which really is their bailiwick: there are ways to do this (or, if not, we are truly f*cked because the same will apply to coal, gas, wind, ...)

the only other aspect that needs a moment's thought is this: what if it's really very economic but only over such a long timeframe that only governments can afford it

well (a) governments are not exactly famed for long-term thinking / acting, are they ?; (b) oil companies ARE so famed; (c) I know of a project being carried out by the National Grid right now which has a 50-year payback; (d) see 'catastrophic event insurance too costly' above

if forced to guess I would say that there will be some new design of failsafe (I mean that in the strict sense) small nuke that will square the circle, economically & politically - & it will probably be developed in China or S.Korea, to the chagrin of the mega-project obsessed French

when this happens, we will feel like gold-plated dicks if in the meantime we have subbed the Frogs for ten of their over-running, over-budget pieces of radioactive mega-nonsense

"Rolls-Royce has designed two different pressurised water reactor (PWR) plants and five generations of reactor cores, each a step-change in power and lifespan, and has supported all Royal Navy submarines throughout their lives."

As an old hippie of the Atomkraft? Nein danke! generation I remember a visually similar sticker:

(I think there are some gramatical errors there - sorry

A couple of weeks back there was an FT Alphaville article on how nuclear would never have seen the light of day when accounting true costs when not smothered and hidden by the state.

Of course that ignores the fact that the nuclear industry only exists in its curent form as the bastard child of the desire to make plutonium for bombs.)

Nick, my understanding is that the Chinese are already working on the development of small scale thorium reactors with the ultimate aim of having one per village and so eliminating any form of grid.

If that is indeed the case, I foresee the western nations trying to produce rules to prevent their use here because of the subsidies paid to the likes of EDF.

budgie - I confess ignorance as to where sub nukes fit in the picture (but see below) - presumably they are small and fairly safe ? (& surrounded by water...)

anon(1) you can come back

ivan - yes, thorium seems to be the business: I read that these little jobbers are designed to fail safe by melting into a small hole (you can tell I am no engineer), Mr W will perhaps tell us more

hovis - would never have seen the light of day... that's what I suspect

only exists in as the bastard child... I am told that the US govt urged industry to develop nukes in the 1950's but were told the R&D costs were prohibitive: so they had the US Navy commission one prototype nuke sub engine from each of GE and Westinghouse, with R&D paid for by the Navy

ND, thanks for comprehensive answer. Your point about marginal value of electricity being nearly infinite is a good one. As some generator bod said on the telly a while back, there is no 'electricity gap' (or whatever the mot du jour was) and never can be, supply and demand will always even out, it just depends on the price. He was presumably sacked shortly afterwards.

budgie, ND: [where do Rolls-Royce sub nukes] fit in the picture ... presumably they are small and fairly safe

Hah. I guess you've not read what the Defence Nuclear Safety Regulator (Commodore Andrew McFarlane) and Liam Fox have said on this lately.

Liam Fox now says he wants a US design sub reactor for the replacement Trident subs "because those reactors give us a better safety outlook".

If you want to read more on this:

And for the good Commodore's report released oner FOI:

(I'm simplifying a little, of course: at night supply tends to exceed demand & people try to 'store' the resulting surplus ...)

(oh, and it seems to be kaltem)

Timbo - it'll certainly put up the costs & delay everything, if it doesn't actually finish off the nuke renaissance altogether

also, the EC intends to require some 'nuclear stress tests' (& not of the cardiac kind), which, I predict, will put the cat among the pigeons more than the banking S-T's did

It doesn't seem to be a magic bullet for nuclear though. You need uranium to start up a throrium reactor. It's more abundant, and produces about half the waste. It doesn't need enriching, but has a much more difficult neutron economy in use. Looks at best just a bit of an improvement after a lot of R&D still to be done.

I thought there was some R&D on full-Thorium reactors, especially in India and recently China, but that is decades away from commercial at best. Some companies are working on Thorium fuel rods for part-use in current PWRs, much like MOX fuel rods, but we are at least 10 years of testing away before commercial use.

Here's the bones of what a solid a Nuclear Engineering International review article says:

“I really cannot claim that there is a great interest in thorium fuel – it is more a matter of curiosity. Based on historical and expected nuclear industry experience, if there is anything that will be the subject of debate by US utilities in the next decade, it will be the introduction of MOX fuel.”

“ADS (accelerator-driven systems) and breeder reactors, such as molten-salt reactors, are so far in the future that if thorium has to wait for one of those developments it’s not going to happen. The point of entry must be the existing infrastructure, at least for the United States,”

NEI also has a summary of India's 20 years of R&D on Thorium, a resource which India has a lot of so a big incentive to develop. But it does not sound like it has progressed anywhere near the end of a research cycle yet: