'Duplicitous Toerags': Quote of the Day 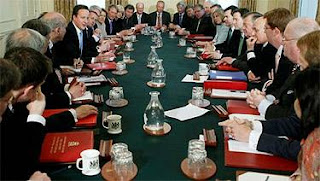 "The Lib Dems are duplicitous toerags, though I have to say they are very good ministerial colleagues" - Tory minister

An amusing end to a crazy week. Let the fun begin.

Nick, I think the other Nick should say to Cammeron, "I think we should call a general election, your supporters think they can do it on their own. I am fed up of being the punch bag, like Geoffrey Howe, so I think we should part company, I thought we could make it but I have to admit I was wrong you've got your mad oikes and I've got mine so for peace of mind now is the time to say "Goobye""

Tweet of the day – the SNP provides a winning combination of Nationalism and Socialism – what can possibly go wrong with that?

Cameron did have a plan

Everything is a conspiracy.

Everything is a conspiracy - that's what we like, anon2!

I think we should call a general election

can't quite see how that works for Clegg, anon1, but I don't imagine Cameron would mind too much

Clegg had better make up his mind what he wants - & it had better be a bit more interesting than his last effort to make a splash & rally the troops, the ridiculous Carbon Plan