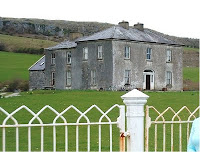 “MIIIILLLLIIIIIYYYY!” Roared Bishop Brendon, the head of the Transcendence Universal Communion. “What’s this I hear about you abandoning spending commitments?” he screamed down the phone at the hapless Father Ed Milly.

“Milliy," Do you know why we ordained you ?”

“Erm..because I was the best man for the job?”

Back in his opulent union office Bishop Brendan sighed and leaned back into his golden chair. A unison steward refilled his champagne glass. As he sipped the Cristal he said, “No Milly. Myself and the Episcopacy of associated public sector clergy decided you were the best man for the job... because we thought you’d be as malleable as your rubber face. Now I want you to get out and say “No! No to cuts!" And then promise a payrise of 18% to all Labour supporters ... erm..I mean..valuable frontline workers.”

“But Bren'... the voters..They aren’t sure that outrageous spending is the answer to debt. They..they..think a more balanced approach..”

“Milly,” hissed Bishop Brendon slowly, “Two things. Firstly, I demand that you get out there and start a campaign of lavish fiscal commitments in key marginals . I want posters put up showing broken incubators overlaid with a picture of laughing Tory bankers and weeping ethnic nurses. I want billboards promising a new regional development hub for every village. A sure start centre for every hamlet. And I want them all up tomorrow. 10 x 10."

"And secondly..If you ever call me Bren' again I'll remove your adenoids with a toasting fork and use them for communion wafers, understand?"

“Good..And I want a slogan, Milly. A catchy slogan that people will remember and will be able to be recited by all the drones in your shadow pulpit without sounding as false as an MP’s expense claim. Oh..And that last one... If your new slogan isn’t a huge improvement you’ll find my Tory-Led boot up your arse! Don’t make me leave my nice post at the Transcendence Universal Communion to have to pay you a visit. Or I’ll be performing laying on of hands... Around your throat. Is that clear?” and he rang off without waiting for his answer.

“Have another glass of milk Ed.” The young acolyte, Father Kevin McGuire, was trying to comfort his mentor Father Ed Milly.

“He’s much better now, thank you Father, " said Mrs Eagles, the housekeeper, “He’s got his knees apart a bit now and he’s managed to take his hands away from covering his genitals. "

“He had an awful fright, Mrs Eagles. It was Bishop Bren' on the phone.”

Ed Milly let out a little whimper of fright and crossed himself.

Mrs Eagles leaned over to whisper in McGuire’s ear.

“Oh for sure it was. Bren' bawled at Father Ed for a good long while. It was like the old Wacky Races show with the General on the phone..” and Father McGuire did his laughing Mutley impression. “Father Ed went completely white. It was like the time he told the Bishop he was thinking of performing civil partnerships. Bren’ fell on him like a fire extinguisher at a demo. Left him crying like a Clegg.”

“I’m fine now, thank you Kevin. It was just ..that Bishop Brendan.. he can be very mean. But what are we going to do? I’ve promised the congregation a different path. A new beginning. Labour: The Next Resurrection. Rising from the dead after being crucified in the elections and buried under a boulder of incompetence. Its my ‘big plan.’ But all the old Bishops want is “Tax and spend! Tax and spend.”

“Tax! Spend! Save the world! Obama beach!” cried Father Jock from his chair.

“Oh you’re still awake Father?... I thought that book on ‘The Crash’ would have made you nod off. It did for everyone else. Well, Father Jock, have you any ideas? “

The old priest stirred. He sat up. His milky eye blazed..

“Pie!” Fathers Maguire and Milly looked at each other puzzled.

They ignored Father Jock’s mumblings and went up to bed.

“Lets sleep on it. Both of us have a really good long think, OK?” said Milly sleepily. But all Ed heard was snores from the other bed.

“You forgot partnership. And its not as easy as 'Big Society' is on the tongue. Although it does make about as much sense.”

“Its no good Kevin,” said Milly. “Its just gibberish. Only an activist would read past the first line...What have you got?”

Father Kevin McGuire passed over a sheet of paper to Ed Milly. He smiled broadly.

Father Ed took the paper. He stared at it. He turned it over. He looked at Father Kevin.

“Yeah. I spent all night thinking, And finally I thought of this,” chirped Kevin cheerfully. “I didn’t imagine It would be this good. Wow!”

“I don’t understand. This is your idea. It isn’t anything..its nothing!”

“Aww come on now, Ed. Its not nothing..its anything. You get people to write on it what they want to have. And then you tell them that's what they've got.”

“But Kevin. That’s a really, really..stupid idea. I mean if I said to a lawyer in Sheffield what do you want they’d say childcare and tax breaks. But to a union shop steward in a factory, they’d say higher wages and...Oh my Lord, its brilliant!..Its brilliant Kevin. You’re a genius!”

“Well..I’m no John Prescott, but its a winner. I got the idea when I looked in the bathroom mirror and saw a great big blank puppy face staring back at me. Who couldn’t love that?”

“But what about the slogan.. something that would allow us to sort of say we’re not spending like Cherie Blair at a property auction, whilst convincing Bren’ that we are blowing wads like the best double deficit days of Father Jock.”

"Help yourself to another slice of PIE."

We’re saved! Mrs Eagles, put on the kettle! New Labour is back!”

Bill, you're at it again. You missed your calling, you know.

The Bishop reminds me strongly of Ray Buckton, memories, memories.

hilarious - oh if I could write so well.