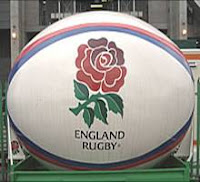 Everything going nicely towards the predicted place in the finals for England. Sorry for poor old Andy Robinson & all that. (Actually, I'm not: a dreadful freudian slip from him in the immediate post-match interview - "we had the match under control in the second half ... that group of players let it slip ..." - bet that did wonders for morale in the camp)

So - will it rain ? Everyone will have been reminded of what happened in 2000. Then again, it rained for the France game

in RWC 2003, and England humiliated 'em. As Clive Woodward said when the French blamed it on the elements: I've been to France, and it rains there too!

The only teams England actually fear are NZ & SA - one of which will be staking out the other finals slot, and will probably win. Which will it be ?

ND, you shouldn't write the Jocks off. This is what winds us up - the arrogance that the English display from time to time! You like to think of yourselves as being the finest people on the planet, whereas we humble Scots are content in the knowledge we are merely superior to the English.

Before anyone starts up, let me add that I am a unionist, I hate the SNP, live in England with my English missus and like the English... but en masse in a fit of patriotic enthusiasm, considered in the abstract... well, let's just say old prejudices can be aroused.

If there's a bit of rain, a complacent England and a fired up Scotland you may well get a nasty surprise. (I just wish they'd play Scotland the Brave or Highland laddie instead of that dreadful greet Flower of Scotland. We might have sent proud Edward's army home, but they did think again & eventually they came back and thrashed us. But we do like a mad charge on to the enemy's muskets and sometimes it goes our way.)

As usual, the scottish front row has no answer to a big pack. It was a good Argentinian try but not a great one. The result tomorrow is a foregone conclusion given the differences.

But if the size of our loss is too great, we'll just have to ask our RBS bankers to trash your economy again.

I do not know a lot about Rugby Union or League, but the last time I watch Union international they seemed to spend their time pulling each others shirts, 7's was a totally different game and more watchable so is League to some extent. Some blokes I once worked with were at one time enthusiastic followers of Union but once up north they switched preferences.

Judging on their performances against Samoa and Wales, SA won't be troubling the engraver this time round.

NZ on the other hand are looking unstoppable.

I will have a bet opposing New Zealand when they get to the final - they are looking good but will they be able to handle the weight of expectation?

Glad I backed Wales and Irelnad at the start, I 'll trade back for some kind of return after the quarters I think.

Scots were unlucky - played really well against the Diegos and should have won. Just like Wales v SA they could have done with a cool head in front of the posts - a 1991 Rob Andrew or a Wilkinson circa 2003.

But England aren't what they were in the kicking department. Remember 2003 - Wales scored three tries to England's one, but Wilkinson, on what was for him a quiet day, kicked 17 points. If the officials keep an eye on the match balls you never know.

Re 'Flower Of Scotland' - it all depends how you sing it.

Well, Scotland have made it a 20 minute game. England stinking the place out

that was rather close. Brave Scotland only lost because they ran out time really, shoddy England performance. With France out of sorts too one poor team is going to make the semi's at least.

SW - you made me re-read my post to see exactly where I'd been as rude as one might infer ...

Anon2 - nope, sorry, I just don't get League: so, so tactically limited

there I go being arrogant again

It's not so much what you wrote, it's the blase assumption behind the post that England will just brush us aside. That's the most irritating thing about the English - you don't even know you're doing it.

Anyway, it was a good game, a close run thing, and England deserved the victory. I'm one Scot who will be cheering on England for the rest of the tournament. But you'd better find yourselves a better front row and someone who can kick, p.d.q.

gracious in defeat, Mr W - hope England repays your support in the next few weeks

"teams England fear..." - I think we are both commenting on the same thing: rightly or sometimes wrongly, England don't fear (a) any of the Northern nations - familiarity - or (b) Australia, because they've nailed them so often in key games

BTW, on Robinson again, after the match down on the pitch he was conspicuously fraternising with his old England muckers, big smiles, when he had no business being anywhere other than with his own heartbroken troops

Yes...I was little peeved at that too. We need McGeechan back, I think. Robinson is just not a good enough coach.