Here's Why Banks Must Be Broken Up 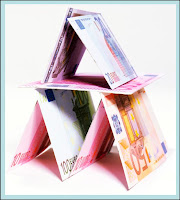 ... or at least, their retail operations hermetically sealed from their 'investment' banking activities.

And here's an illustration of why. In 2008, staid old Bank of America was bullied into buying the troubled investment house Merrill Lynch, as part of the emergency actions taken at that time. Needless to say, Merrill is stuffed to the gunwales with toxic waste, in the form of CDS liabilities etc. On the other hand, BoA, being a retail deposit taker, is covered by the Federal Deposit Insurance Corp, to protect its retail customers (just as individual depositors are protected by the government in this country).

So what does BoA propose to do ? Why, transfer the Merrill liabilities to the BoA itself, of course ! Thereby transferring billions of dollars of risk (or is it trillions?) onto the US Taxpayer. And it's even getting support for this scam from the Fed - though not from the FDIC, naturally enough.

So - good luck with that one, America.

Yes folks, we all know the score: bankers the world over will do whatever they are allowed to get away with - which certainly involves harnessing whatever security that is available from retail ops, to leverage their speculative dealings. Hopefully ... this brazen and blatant stroke by BoA will highlight the dangers and stiffen the resolve of our own banking authorities to carry through the rather half-hearted measures they have in mind.

BoA wasn't bullied into buying ML, Lewis had been dripping for it for years.

Fundamentally no amount of guarantees and division can separate interest seeking capital from credit risk.

by way of interest, is there a final figure for the L Bros fall? I know PwC have trousered 400 million so for, but what kind of assets were in fact recovered against the obvious the liabilities and waste. Barclay's fancied that one I seem to remember.

Sean....not there yet re the final number....will take another 10 years at least.

Raven - risk taking on corporate loans etc is one thing, pushing Cdo cubes into a retail bank with 99% losses possible is another thing. I am with Nick, it is not much of a lesson to learn not to trust investment bankers after this crisis.

Since nothing is going to be done to change the banking system - indeed, we seem happy to bleed the poor to maintain it - I shall cynically keep my shares in HSBC & Barclays (wot I bought cheap a couple of years back). They apparently will not be allowed to fail, so it is a long term dvi-paying one way bet as far as I can see.

Hopefully Vickers is just a staging post on the road to a new Glass-Steagall in the UK at least. The markets do seem to be changing their assumptions of future bailouts.

The alternative, of course, is for there to be no regulations at all but for people to take a bit of personal responsibility for where they put their savings.

the loss rates on bank assets during this crisis has been no worse than previous ones. if anything adjusting for much higher leverage, they have been significantly lower.

so instead of the bank using the deposits, it will ring fence them, and invest them in exactly the same assets as before, just packaged by another firm. how does that solve the problem?

i think Blue Eyes actually gets to the point, the risk comes from depositors not caring at all where they are putting their money, and chasing very risk yield.

subtle points, Raven but I still think the blunt measure is required, because not all capital is seeking a return

my old mum & dad just want security, & many like them

NS&I ? yes of course, but they need banking as well

Nick Drew: "because not all capital is seeking a return"

Oh come on Nick, in an inflationary =>5% environment, ALL capital is seeking a return.

If your Ma & Pa don't want growth, they probably want a return on their savings equal to the depreciation due to inflation and their annual cost of living.

Oh and one other thing, I am with BlackRaven, BOA wasn't bullied, at the worst they were hurried into the deal and didn't carry out due diligence.

savings can go to ns&i, you don't need to keep much money in your current account.

i think looking at US money market funds is informative, they don't do any investment banking, etc. they would be exactly like a segregated retail bank account, except as the crisis showed they had bought plenty of toxic paper.

and again, if you look at RBS and HBOS, its not really the investment banking part that got them into trouble, it was the treasury department.

at a bank the treasury will pretty much sit independently and managed that cash position, and that is the part of the bank that loaded up on "aaa" paper to earn a little bit more yield. the people left to look after the assets in the segregated bank will do exactly the same thing.

there is a great line Einhorn came out with about AIG; “Both President Obama and Chairman Bernanke have said that the problem with AIG was that greedy people put a hedge fund on top of an insurance company. As I see it, AIG failed precisely because it was not a hedge fund, but a highly regulated, AAA rated insurance company. Call it the curse of the Triple A. The market incorrectly believed that regulators and rating agencies carefully monitored its risk profile and activities. As a result, AIG was able to abuse its access to unlimited cheap financing without its counterparties performing any additional credit analysis or demanding any collateral. Hedge funds can’t abuse the system in the same way, particularly in the aftermath of Long Term Capital Management, as lenders pay much more attention to hedge fund counterparty risk and collateral requirements. Had AIG been a hedge fund as President Obama and Chairman Bernanke claim, none of this could have happened.”