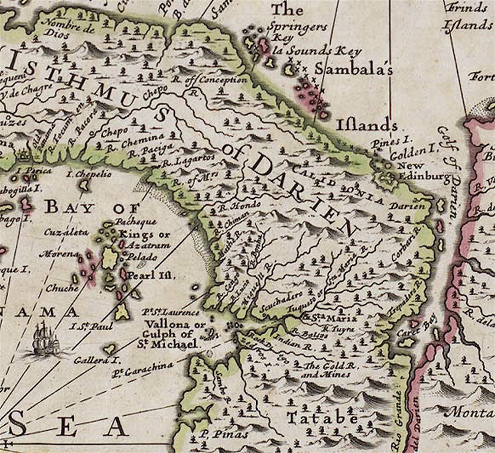 Always worth a quick glance back in history to see how things evolved. Back in the 18th Century Scotland had decided to get into the colonisation game and the King and Lords of the land had put up much money to sponsor adventures in the new world, to places such as Panama.

Unfortunately for them, these all failed and the vast costs and debt weighed heavily on the State. So much so that they really needed the help of their hated English brethren to get them out of a spot of bother. the end result of this mess was the Act of Union of 1707.

Today, there are moves by the SNP to have a vote for Scottish independence. but I ask, where is my vote as an English taxpayer? We saved Scotland 300 years ago and have continued to do so for the time since, including most recently when HBOS and RBS were the 2 main banks along with Northern Rock to bring down our financial system.

Instead, we are to be told that it is up to the Scots alone as to whether they want to remain part of the UK. As it happens I am quite in favour of them leaving. The cost of the Socialist state in the North more than offsets and oil and gas revenues and will also ensure a much more right-wing Country is left behind. As it would jeopardise our UN status and military standing I am quite keen too - for I don't see how the UK can afford to continue its current high spending ways in a world where we are dropping down the GDP tables at a precipitous rate. Scotland leaving the Union will force and honest conversation to be had by the remaining peoples of Great(ish) Britain.

Where is my vote though - it stakes two to tango after all. In the US secession was enough to kick off a very bloody civil war. Now of course I don't want that, but for an amicable split, as with marriage, it is best if all parties agree rather than one flounces off alone.

Why the unionists don't insist on this or at least use it as a bargaining chip is beyond me. The negotiating stance of the Government (and previous one) leaves a lot to be improved upon.
Posted by CityUnslicker

The difference was that in the Americas the Southern secessionists were an agricultural, rural, religious society. They had little in the way of heavy industry, though many service industries. The United states was the main provider of employment outside of agriculture, by maintaining a modest standing army, which many Southerners took advantage off.

Innovation was slow,and local state meddling and local politics high. The southern States received far more in taxes than they paid and were very heavily over represented in the senate of the day as they were allowed to count the slave population as voters, even though they never voted. Local politicians never broke ranks. Southern states voted en mass to defeat northern Bills that they didn't like, or that would restrict their power in any way.

The South were poorer/capita, had less infrastructure and although the cotton crops were so vast that the world feared recession if the South would not supply, the world soon found other sources of the crop and the South ended up still supplying the North, even during the war.

The southern states did not feel a kinship with their,godless, idle,capitalist, moneymen brothers to the North. They rejected the ideas of big cities,mechanisation and production, preferring the life of country gentleman of leisure, supported by an unwilling population of slaves who gave their labour, unwillingly,for free, to their overlords ...

Hang on a mo..What are the differences again?

"and have continued to do so for the time since, "

The cost of being able to secure your northern land boundary.

I won't get a vote despite being born and bred in Aberdeenshire and four years with a commission in a Highland regiment..........

-
It will guarantee a con majority
It will provide a template for the seccession of Wales (unlikely) and NI (...) so no more UK.

A bit moot really as the people who live there know they are subsidised by the south and now we all belong to the EU, being part of the UK has less of a sting.

Principles or Purse
or
Spondoolicks or Scottishness

The West Lothian question being answered is a must - and my MP assures me it is to be dealt with this parliament. We shall see - regardless, it was rich to hear Nicola Sturgeon on R4 this morning complaining about England's undue influence over Scotland, when Scotland was the difference between an outright Conservative win and a hung parliament.

The sooner we can cut loose the welfare countries the better. Let them all devolve.

Just a very minor matter, not worthy of public discussion in the present debate, but what currency will Scotland use? Another triviality is food supply. At least they will be able to rely on the Russian navy for protection.

Let them have their independence.

With their newly created delicacy of deep fried butter it will simply be a matter of waiting.

(My guess is that they won't go for it. They have too good a deal as it is.)

I would prefer that England and Scotland retain the Union. We are close by reason of sharing: much history especially the last 300 years, a Common Law system, the island of Great Britain itself (with Wales), a very similar culture, almost identical genetics (see DNA research by Stephen Oppenheimer), and the language.

This must be compared with the very much more pronounced differences between anywhere in the UK and the EU, especially in the areas of the legal systems, culture, language and genetics. It is, of course, one of the aims of the EU to see Scotland split from the Union, just as the EU tried to Balkanise England recently.

We are always told that our greatest trading partner in the world is Ireland.

Its because they speak English. Conduct business as we do. Have similar customs and legal systems.
Many of the retail chains, businesses and supermarkets you might find in Bristol, you will find in Dublin.

Scotland would just be another valuable trading partner.

If they go and the Welsh too the we can call ourselves English again - not "British"!

So Tara to the north from me, and goodbye to the west from him :)

Also they can start to tear down our "sphere of influence" by teaching the world Welsh and Gaelic...

"... and have continued to do so for the time since": almost certainly bollocks. Scotland became much more thoroughly industralised than England, so it probably subsidised England for a century or so, and then had a second spell in the glory days of N Sea oil and gas. It's conceivable that it's still subsidising England.

In terms of having a national vote: it would be tricky if there was an english majority in favour of scottish independence, but a scottish vote in favour of the union. Would scotland then be ejected?

The question of who is included in the electorate is quite vexed. John Redwood blogged today

"Do people born in Scotland, temporarily resident in England, get a vote? Do people born in England, now resident in Scotland, get a vote? Should the referendum take the already established Scottish electoral roll, or should we allow a possible surge in new registrations as interested people register themselves at a Scottish address for it? What are the correct qualifications by residence, property ownership and employment? There are difficult issues in creating Scottish nationalist purity in the electorate when the two countries have become so intermingled by blood, marriage and residence"

@demetrius the SNP have said the currency would be sterling, at least for a time.

No, no. My father is more industrialised than your father. Don't be so absurd.

There is a long standing Union between England and Scotland. It reflects the fact that there is far more in common between them than there is with either and any other European country.

Local government has been over centralised recently, but there is devolution to the constituent countries of the UK. Unlike in the EU, with "ever closer union". So Scotland will be less independent as a small country in the EU than they would be in the UK, with the UK out of the EU.

In the meantime, since "independence" for Scotland splits the Union and directly affects both parties, the Scots should not be surprised if the English develop their own agenda, both during preparations for a referendum and after.

"the island of Great Britain itself (with Wales), a very similar culture, almost identical genetics (see DNA research by Stephen Oppenheimer), and the language."

Another question over Scottish independence.
What happens to all those high profile Scots in government, both in the civil service and those elected in England.
Surely after an awkward split it makes no sense to have a large amount of Scots at the heart of the decisison making process in England.

since when has Scotland had a common law system, Budgie? The rest of your post was equally garbageous

So Liverpool, Manchester, Sheffield, Leeds, Birmingham and all places between were less industrialised than.....tries to think....Glasgow?

It is usual to refer to the law of England as a "Common Law" system, yet the amount of statute, regulatory, and EU (Roman) law is nowadays immense.

Scotland's legal system is different to England's, probably has more Roman influence, and has a different history prior to the Union. Nevertheless it is fair to describe it as a Common Law system, not least because of 300 years of shared legal history and precedent.

The influence that English-trained judges have had on the common law of Scotland through rulings of the Supreme Court of the United Kingdom (and formerly the House of Lords) has been at times considerable, especially in areas of law where conformity was required across the United Kingdom for pragmatic reasons." [Source: Wikipedia].

Make that oil revenues (and not all of the oil in the N Sea is adjacent to SCotland. The gas fields are offshore from Norfolk and Lincolnshire and in Morecambe Bay, neither of which is particularly Scottish. I don't know of any breakdown of PRT and North Sea taxation into Scottish oil and English gas revenues, but I suspect Salmond and Sturgeon might be disappointed.