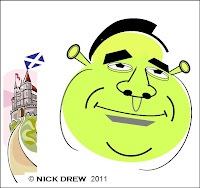 So, the protracted Salmond-baiting season has started, and he's already been wrong-footed neatly by the merest of opening gambits. His endless game of 'referendum-but-I-won't-tell-you-when' has been called smartly to an ignominious halt, and the best he can do to cover his blushes is to pick a date later than the one Cameron suggested.

Much more of this and his reputation as the smartest political operator in these isles will take a bit of a re-assessment. Of course he is wily, determined and as focused as only a monomaniac can be - so he'll often steal a march when no-one else is looking. There will tactical ebbing and flowing for months to come.

But the long-overdue power-play will soon be seen, the game's afoot, and the beaters will drive him into the open. If Hatfield Girl is correct, every man's hand is turned agin him and he may end up pretty bruised.

For the record: it means something to be a Brit; I am a unionist; he is a charlatan; and I wish him three years of misery.

UPDATE - apparently we have George 'student politics' Osborne to thank for this. No surprises there ... game on!

Email ThisBlogThis!Share to TwitterShare to FacebookShare to Pinterest
Labels: Scotland

I've moved between England and Scotland a lot and even my brother and I have different accents as a result. Will I get a vote if I happen to be back in England in 2014? There's a good 500k or so Scots in England that I imagine will be deprived of a vote.

The whole independence movement has always struck me as a very city based movement. I dare say a Catholic-socialist movement made up of semi-recent Irish immigrants wanting to continue the fight and socialists being socialists. The Highlands and Islands (what most would consider "real" Scotland) are much more unionist and even something like Bonfire Night is a bigger event than anywhere I've lived in England.

Saying that people do vote SNP but it's mostly for the same reasons people (used to) vote Lib Dem than any want for independence. If Salmond for once actually did anything I'm sure his popularity would take a dump much like the Lib Dems. I really don't understand why so many people say he's a good politician. Maybe twenty years ago but in my political lifetime he's basically done nothing and made no serious decisions.

I've also run into a lot of people who want independence but not under the SNP and definitely not if Scotland jumps straight back into the EU. The SNP are possibly their own worst enemy.

I don't know which way I'd vote. The SNP have spent decades answering any financial questions with just "the oil!" and everybody knows their numbers don't actually add up and a split would be expensive for both sides. If Scotland did leave the UK but joined the EU then it would create even more obstacles preventing the UK from leaving the EU. But voting for a split and stirring up the political class on both sides of the border sounds very tempting.

Overall, I'd put my money on the union staying together for now.

1) I don't think there has ever been a majority of support for independence?
2) The recession.
3) The inertia of the status quo.
4) The establishment will be massively in favour of maintaining the union and have a much bigger campaign, e.g. see the effect of EU backed support for the Lisbon treaty in Ireland.
5) The SNP are the worst party to lead an independent Scotland.

So, is it Cameron's call or Salmond's call? Who cares? - let them toss a coin. I cannot see this issue being worth any significant parliamentary time or taxpayer's money - it sounds important but the result hardly matters at all. Has Cameron nothing better to do? - maybe not.

Looking at it as though the issue is merely "independence for Scotland" is totally one sided and shortsighted. The union of the kingdoms of England and Scotland resulted in a new country: the UK. The UK is part of the EU.

Can anyone seriously imagine France will pass that one by? Independence for Scotland is not a "who cares?" issue - it has profound implications for both countries.

They will allow the remainder of the UK to assume the position of the old UK. There is a huge precedence for this with the Russian Federation taking the positions of the USSR.

It does begin to look though as if the people of Scotland have been offered a referendum on their membership of the European Union that is persistently denied to the rest of us.
A legally binding independence referendum which went for independence would leave Scotland outside the EU and it could then apply to be an accession state. Scotland might well prefer not to and negotiate the same relationship with the EU as that of, say, Norway.

are you going to run a book on how much of the national debt is partitioned to Scotlans, if the Scots decided to secede from the Union?

diogenes, some years ago the SNP website demanded that an independent Scotland should have its share of the National Insurance fund. I kid you not. This demand was removed a short while later.

@ Anonymous: "The whole independence movement has always struck me as a very city based movement. I dare say a Catholic-socialist movement made up of semi-recent Irish immigrants"

Speaking as a Glasgow-Irish-Catholic refugee from the Red Clyde who shed his Socialist beliefs a long time ago (having a mortgage & running a business has that effect) I have to say this is far from my experience of family & friends. We 'Fenians' are much more likely to be Labour-voting Unionists. Because the SNP has historically been filled with petty-minded prod bigots... and it is a very short step from hating the English to hating "semi-recent Irish immigrants", as you so neatly put it.

I'm a steadfast Unionist, I can't stand the SNP and I positively detest Salmond, but even I recognise that he is not a charlatan. He is a very clever operator. And George Osborne (a rich, posh Tory boy exuding arrogance) is his dream opponent. They're playing into his hands. As for people who think, like RogerH, that "it sounds important but the result hardly matters at all" - well, words fail me. Your country is falling apart and you don't think it matters.

What does not matter is whether the referendum is Cameron's call or Salmond's.

As for secession - very very unlikely I reckon - Cameron and Salmond and the Treasury will ensure the question(s) and propaganda will deliver a mutually satisfactory result - a little bit more power for Scotland.

Secession - too inconvenient for (almost) everyone.

@Budgie - fair point. As a Scot living in England it seems I won't get a vote. IIRC there are about 500K Scots-born people in England; I daresay we would all vote for the Union, so I can't see Salmond giving us a look-in. My gut feel is about 20-25% of Scots might vote against the Union, about 50-60% in favour and the rest would be too stupid to care one way or another as long as the giros keep coming.

Personally I think Salmond's long term game plan is to piss the English off so much it is they who will want to dismantle the Union. He's a nasty man... exhuming long-buried ancient hatreds for his own personal self-aggrandisement. A cock preening on a midden, as we say back home.

"Preening"? Is that what you call it?

oh yes, very much so. Basking in self regard while standing on a pile of shit.