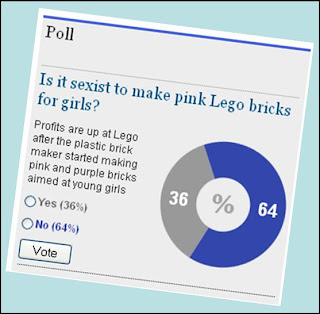 There is always something challenging to be found in the Gruaniad, to make you think about the issues of the day.

It's fresh, imaginative and thought-provoking journalism alright: and there's nothing stereotypical about their readership, or the contributions to CiF, oh no.

But somehow we learn that these are desperate times for the dead tree press ...

Suggestion: in important matters like this, start by getting the facts right. Miss Drew had a set of pink Lego bricks 20 years ago.

Ho hum, back to the day job.
ND

I saw a Lego 'friends' set yesterday.
Make houses and outdoor living space and swimming pools and a gym etc. Lots of Lego figures with accessories. Plenty of pink bricks in the set.

Its simply another format of the dolls house.

I thought it was a brilliant idea.
Lego has always been male heavy.
{Lego is still a top 10 toy seller.]

BQ - Making houses ? Have you ever tried to construct a Lego pitched roof ?

About all we could make as kids were WW2 bunkers - what good would pink be for that ?

I used to load up the Tonka Toy dumpster up all day with pink ones many years ago, Cindy was also taken for a ride too.

I know that boys and girls are different, because I have my own children. Presumably the Grauniadistas would consider me "sexist", whilst I consider them fools who either do not have children or, if they have, ignore them.

I too am amazed about this 'sexist' approach to parenting from the ultra left.

Miss Quango, age 4, visiting her cousins, who were all boys, found few 'girl' toys to play with. In the end she put an 18 wheeler truck in a blanket and into a kids wheelbarrow and pushed it around as if it were a baby.

Master Quango age 3 uses her wooden,pink dolls house. Only he takes the dolls out and fills it full of cars.

I'm pretty much the world's leading authority on Lego, because I saw that James May programme about it.

Allegedly, when it first started, they said it would be gender neutral, so there were no pink bricks, and no bricks or pieces you could use to make model tanks or model aeroplanes. Very anti-miliarist.

My little girl got some pink bricks a couple of years ago, I didn't realise they'd been out for twenty years or we could have got her some when she was little.

And my little boy has found a web site called Minifigforlife where you can order all manner of helmets, guns, weapons etc to dress up your little Lego figures and re-enact WW2 battles, there are some fantastic stop motion remakes of WW2 films on YouTube.

EK, if you want to make a pitched roof you use the bricks where one side is diagonal, that makes the perfect pitched roof, they even had those when I was little (when Lego was still a relatively new invention).

I'm pretty much the world's leading authority on Lego ... if you want to make a pitched roof ...

you really are into bricks & mortar, aren't you Mark ?

I rather liked Meccano. I don't rememer pink bits.

P.S. For the girs, shouldn't Lego also do sparkly parts?

Pink lego bricks - that's a great idea and the girls should love it.