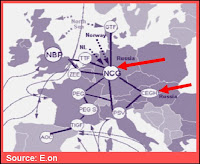 When German energy companies plot the map showing where their gas comes from, it must give them a frisson of atavistic horror. The great red arrows still arc from East to West with their origins in Russia.  The shades of Zhukov and Koniev are abroad.

Decades of German foreign policy have been given over to appeasing Gazprom: they know what staves off hypothermia on those cold nights in Prussia and Bavaria.  So it comes to something when a senior executive at RWE can publicly state:

"Every producer but one has understood that structural change is required. If the one that hasn’t understood it so far doesn’t accept the facts, he will have to learn it the hard way. Nobody’s bigger than the market, not even the biggest supplier."   (Stefan Judisch, CEO RWE Trading, 'Flame' 17 April)

What's meant by this is that our old friends at 'the one that hasn't understood' (Gazprom, this means you) must stop insisting on oil-price indexation for their gas, and concede a lot more than the 15 or 20% spot-gas indexation they have yielded thus far in tortuous price re-negotiations.

Implicitly, it is also clear from Judisch's outburst that RWE is so far up the creek, diplomatic niceties no longer matter. They are not alone: the other giants of Russian gas importing - E.on, GdF-Suez and ENI - are also slowly bleeding white from the effects of their huge, long-term, horribly out-of-the-money oil-indexed gas contracts, and other energy-sector issues of an intractable nature.

Why anyone at DECC ever imagined these guys will chip in for four or five UK nukes is beyond me.

That would be even funnier if the bloke were called Jüdisch and not Judisch.

The Germans are completely crazy. They are closing down nuclear power stations when they should be building a dozen new ones.

They are in effect ruled by Putin.

So let me get this right, ND.

You are applauding a German, Stefan Judisch, pointing out, inter alia, that Ivan Foreigner is not looking after German interests.

well Budgie, but what Herr J is primarily saying is that whatever the Russians will try to do (in their own interests, of course!) Gazprom will eventually be forced to bow to fundamental market drivers

you can suspend the laws of gravity by sheer force of will - for a while ...

Talking of Gas, We had a new fangled condensing boiler fitted to day and I was talking to the plumber about renewables and the like. He told me that for new build houses gas will not be permitted from 2016. "It's all heat pumps and solar thermal now" he told me. These combined ground or air sources feeding thermal stores that provide underfloor heating and hot water... So we are not going to be reliant on gas in the (distant) future then? Is this accurate/right ND according to your knowledge?

Actually, ND, what Herr J is primarily saying constitutes no more than a whinge. He wouldn't be just saying it if an alternative source, and its necessary infrastructure, was already in place.

Perhaps you really are maintaining that if you were a Russian you would voluntarily reduce your gas prices to world levels, even though you had the Germans over a pipeline. If so, that animus is culturally, not market, driven.

To the rest of the world such a view is regarded as so naive, even foolish, that it is met with deep suspicion. As a result England excels at negotiating defeat from the jaws of victory.

Timbo - not my specialist subject, I will take a look

but as regards the 'decarbonisation' agenda, nothing would surprise me: it has long since been decided that a necessary first step is electrification of almost everything, most especially space-heating

this is on the rather extreme assumption that electricity generation itself can be decarbonised - I leave you to debate with Nuclear Budgie whether this is feasible, speaking of whom ...

Budgie - well given that Herr J is part of the 'rest of the world' & seems rather to be on my side of this one, you might have over-stated the position there a bit (except of course that you write him off as a whinger ...)

surely in everyday business you must have come across deals that are just too lop-sidedly beneficial to one party for their own good ?

That party can just dig in and insist on the contract if it chooses (well, certainly in Common Law jurisdictions: funnily enough it's a different matter under Civil Code, which Herr J's contracts are)

but in the long run it may prove to have been ill-advised: re-negotiation is generally the way

of course, a lot of this is megaphone diplomacy, we've seen it all before and re-negotiation will happen eventually - or collapse of stout (German) party, which won't get Gazprom anywhere

you talk, quite reasonably, of 'self interest': I'm saying that in very big deals like this, one's definition of one's own self interest had better be quite well-considered

ND, what "ought" to be, and what is, are two different things. And the "ought" is dependent on cultural assumptions.

ND Re "electrification of almost everything, most especially space-heating".

Wondered if you had caught the news about France & the Feb 2012 cold snap? Because of domestic space heating, France ran out of Leccy, and its neighbours had to supply 13GW (that's a lot) of power to France to see them over - including 3GW from Germany, which was still able to do that after shutting down its nucs.

I know France offers some very low tariffs to use up surplus off-peak power from its nucs, but hadn't realised this went as far as one third of existing and three quarters of new houses using electric space heating. As a consequence France needs 2.3 GW of extra power for every degree Celsius of outside temperature drop. Thus a long deep cold snap needs lots of extra leccy.

This points to lots of electric domestic space heating needing large demand reduction capability in industry, or lots of reserve capacity. Possibly a bigger issue than the wind backup issue.

This is all pretty obvious, but I hadn't fully appreciated this until recently.

Mr W - I am trying to piece together what happened in both France and Germany, Feb-March. The Germans were confidently expecting brown-outs or worse if winter had been cold: in the event, 4th Qtr 2011 was mild and the harsh weather came late in winter and gas reserves etc were high

but I gather there were some very close-run things

so thanks for that link - another piece in the jigsaw

of course the good news is that interconnectivity, diversification and well-functioning markets can solve some of the problems

the bad news, is that the respective power fleets are getting less and less fit for purpose (to use the trendy idiom)

There is a very easy way out of the reliance on Gazprom, its called shale gas. One could really argue that nat gas is a fantastic bridge for the next 50 years until true renewables (instead of flaky ideas) are developed enough to be efficient on a mass scale. It appears the UK also have huge unconventional nat gas resources as well. The technology to exploit these resources is there, and as long as radical environmentalists do not get in the way, a revolution is hand. France though has already banned fracking from shale, and I bet the Germans will shortly. Provided the UK takes advantage of its opportunity, the British could end up being a huge supplier to Europe!

welcome Mr Bamboo: yes, we have waxed lyrical about shale ourselves here, starting with this and several other times besides !

ND, did you see that on 9 Feb French prices peaked at 600 euros/MWh (about 50p/kWh) - 10/11 am "Claring-Price" (penalty for uncontracted usage?) at 2000 euros/MWh. That must have been their crisis day, sucking in power from anyone who could get a spare electron into France. Though the surrounding weeks are still around 100 euros/MWh.

Timbo, did your friendly plumber explain that to you that your new boiler has to have a return water temp of below 55C (ideally well less) for it to run in condensing mode? So turning the heating water outlet temp over around 65 to 70C[*] risks running the boiler in a non-condensing mode roughly 10 to 15% below design efficiency? (Tap hot water temp does not matter, as inlet water is always cold.)

Talking to friends, it seems few domestic users understand this.

[*] A well designed modern CH system should have a radiator drop temp of around 20C, so outlet temp of 75C might still be efficient - but older designed systems often have a 10C radiator drop temp, putting efficiency at risk (I think) above 65C. Some boilers are smart, and monitor inlet temp to try to stay within the efficient condensing regime, but I don't know how common that is, or how well it works against a user who just turns up the boiler temp dial.

No he did not - what he actually said was that the boiler would control itself based on the temperature of the water and there was no need to fiddle with the temp control. In fact fiddling with it might cost money by making it less efficient, apparently it controls the size /intensity of the flame automagically.

@ND - I got less lazy - it seem these new regs on gas appliances do come into force for new build in 2016 and that includes your gas cooker too!

I suppose they will use the gas to generate the 'lecky centrally as that would (logically) be more efficient and emissions more controllable. Of course then there are all the conversion and distribution losses which will make it less efficient :(

Timbo, you seem to habe a good, smart, boiler there. Sounds a lot better than one installed a couple of years ago I looked over.

I don't think the 2016 Planning Regs being planned ban gas CH - certainly gas CH is one of the options listed in the 2011 final report of the specialist Task Group commissioned by the Housing Minister to look into this. From what I make out from a skim thru, there will be carbon targets for different types of houses, and developers would be free to use the technology they want to meet the targets - so spend more on insulation and use a small combi boiler, perhaps with a bit of PV, is an option. The main competing technology they envisage seems to be Air Source Heat Pump, which sounds sensible for 2016. They seem to envisage the 2016 measures would add about £9k to the cost of building a 2016 semi.

the 'zero carbon house' - or 'carbon neutral - is an interesting idea (I have seen some of the new roofing, it is excellent) but there must be some fairly theological definitions being used

meeting peak load reliably without carbon is still the issue

(on the other hand, hilariously, the German power market is so screwed that recently, peak power prices have exceeded base-load on some days)

that should be 'base-load have exceeded peak', of course ! (otherwise, so what?)

it's so weird I couldn't write it properly ...

Gazprom gas is cheaper than LNG.

It is oil indexed but there wasn't any complaint from the Germans or other consumers when oil was at $20/bbl and Russia and others were recieving $30/mcm ($0.85/mcf).

Why do the Germans and other European consumers think they have the right to super cheap gas from the Russians, Kazakhs, Uzbeks and Turkmens? Europe doesn't sell super cheap products to them.

China pays the same as Europe so RWE are just being grumpy: if they ever built Nabucco, the Turkmens would charge them the same as they charge the Chinese and Russians; which is oil indexed gas prices and currently about $250 - $300/mcm $7 -$8.5/mcf) + transport.