Ireland & the Wheelie-Bin of History 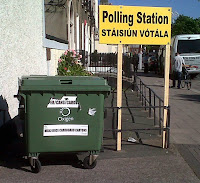 Oh dear.  Voting has commenced, starting with Craggy Island, and on Thursday the rest.  They've been told what to do and they'll probably do it.

After years seeking freedom from Britain, and more recently from the Church of Rome ...  and now this.  Recycle your hopes and ballots here.


Oh, and no rollerblading, Dougal !  Behave yourself.

Does it matter? This treaty goes through if 12 out of 17 Euro-countries approve it, and I doubt there'll be many referenda.

Oh but there is a big difference. Britain invaded Ireland whilst Ireland invited the EU to take control.

Result is more-or-less the same.

I can't believe you copyrighted those photos !

Seeking freedom from the Church of Rome - to join the English and instead be the slave of one's own desires. At least Luther and Cranmer had an alternative that wasn't "me".

(I know, we're all slaves of our desires to some extent ...)

Do you think there'll be a bull run in Spanish markets ?

Look at the shares and Spanish debt at 6.7%. Serious bailout looming.

I didn't think there were any more wheels to come of.

MW - actually, I do think it matters to the Irish, at least in the short run. Whether it's for the best long-term, I do not know

Laban - you could state it philosophically like that, but a large part of it is more basic: they just don't like their kiddies being molested

Bill - didn't think there were any more wheels - ordinarily I wouldn't accuse you of lacking in the imagination department, but ...

For the sake of the children, let's hope the Eurocrat placemen in Dublin will just fiddle the books!

ND - I think the secularisation of Ireland long predates the priest scandals (which are inexcusable IMHO). It's been becoming more like the mainland for the last 25 years, and the scandals only really kicked off in the last ten.

The boom years ran up until 2008, immigration and asylum levels are high, the youth/dance/drug culture is widespread - it's starting to feel much more like degenerate, decadent England. I can remember 25-odd years back seeing 'Life of Brian' in Cork just after the ban on the film had been lifted. At the time it was a big deal - it wouldn't be now. While in many ways the end of Catholic Ireland is a tragedy, it also cuts down the supply of volunteers motivated by Cathleen ni Houlihan and Our Lady Queen of Ireland, so it's not all bad.

(I curse the rebels once a week for their destruction of their own history in the Customs House 1921 and the Four Courts in 1922. Tracing Irish relatives is a near-impossible task thanks to those vandals. If the Brits had done it, it would be considered a crime on a par with Louvain or the burning of the library at Alexandria)

ND, if I were Irish, I'd vote "No", if they collectively vote "No" I'll be delighted. But they'll be steam rollered anyway (for the time being) as this one is QMV or something.

A funny old world where I find myself agreeing with the likes of Gerry Adams.

Laban - thanks for the perspective (I'm learning all the time)

Mark - yes, an Irish NO means Ireland opts out & the rest carry on (see 'Implications' in FAQs here - notably "Receipt of funding from the permanent rescue fund, the European Stability Mechanism (ESM) from 1 March 2013 is contingent on ratifying the Treaty");

but 'opting out' is even uglier for I in the short term at least: the banks I meet with here say they will pull several large plugs immediately upon a NO

as regards whether, even given the above, they'd be better off in the long term, I'm not equipped to judge

I think your instincts are sound: it's never good to be agreeing with Adams

As the Irish national anthem says, "A province once again".

But then the Scots are about to do the same thing - fleeing from the largely-benign, non-interfering domination of the English (whose governments they have dominated for several decades) straight into the anti-democratic, far-from-benign, endlessly-meddling dictatorial embrace of Brussels.

What is wrong with people?