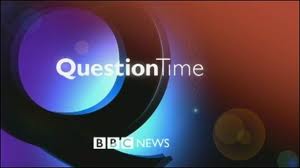 David Dimbleby chairs a debate on the big stories of the week from Cardiff, with a panel including Queen guitarist and astrophysicist Brian May,John O'Farrell, {amusing comedy writer and Guardian columnist, but sooooo Über Blairite he couldn't bring himself to write any jokes about New Labour in his modern, comedy history book}
Shadow Welsh secretary Peter Hain,{former shadow welsh secretary surely? Standing down to lobby for a big barrier. Has anyone done the background checks on Hain & family, company boardrooms, shares etc. He's not exactly been the whitest of ministers.- Sorry Pete..no offence.}
Minister for disabled people Maria Miller,{can't even recall her. Another of the Cameron babes.}
leader of Plaid Cymru Leanne Wood { a contender for most ludicrous, expensive and unrealsitic growth initiatives award}  and Daily Mail columnist, and former editor of the Sun, Kelvin MacKenzie {Good old Kelvin- tell us exactly how Rebekkakkah got the job as editor. One minute she's working in the post room..next minute she's in charge of a global corporation...? Tell us Kelv...you know you want to.}

New season
Score 1pt for each correct question you guess that is asked by someone in the BBC Question Time Audience. maximum of 5 questions.
Enter your guesses into the comments.

1. Listen Greece and Germany, the markets are going to win. The banks love different currencies and they can't gear up their balance sheets anymore so go face the music.

2. If a dog wins BGT, where is the talent in the country? Simon Cowell is talented. Saturday night entertainment ...Be kind to dogs. Every dog has his day.... (I'm not sure about that last one.) I loved him getting in The Voice should be a radio show. It could be, but it shouldn't be.

3. The PM's speech. He'll do anything for the country... well, tell us what he has done and what will he do, eh? Austerity and growth do go hand in hand. I am not sure about longterm bedfellows though. Won't the people ever work out there are different types of growth and growth in public sector services will end you up in hospital? Democracy fails.

4. Brooks, the witch ... and Hunt. Leveson won't get involved per se but he cannot stop all interactions between people. It is very tricky. A shout out for Robert Jay QC btw.

5. Insulting someone is an offence, so no nasty names for you, BQ. What if you go drop the Olympic torch though and the flame goes out? What could we possibly say?

That's my lot. In early.

1 - independence for Wales from the Coalition scum etc

3 - that euro would be better if we were in it instead of shirking our socialist responsibility 9this was the lead article in the Guardian today - OMFG!)

4 - Eco barrier bollocks is all very well what about re-opening the coalmines to boost growth etc.

5 - it's all thatchers fault - this will be an answer to one or possibly many questions.

2. Rebbecca Brooks top be tried (a shoo in gioven Kelvin's there)

3. Camaron - what a loser, is anyone listening to him?

4. Something Welsh ( the bbc website is so parochial I can't pick anything)

Previous winners are always so keen!

1. Greece- Bankia - when is a Euro not a euro. when its a dodo. "Grexit" from Kelvin. John probably won't be able to face the truth.

2. "'becca 'becca .. prays to Mecca. Shunned by Dave so now has a vendetta." Lets burn her.
Really starting to go off this story. Does anyone else remember Ken Starr? the lawyer who prosecuted Bill Clinton.
Clinton was found guilty but Starr so trivialised the trial with banal minutiae of crap that the public pretty much let Clinton off.

3.Reform of section 5 of the public order act. Yes...that'll be interesting.

The scandal is that about the only person in Europe with a better pension than a chief constable is Theresa May.

5. Vauxhall boost for wales. How exactly was the doing of Plyd?
It was good the union agreed that it was better to have a pay freeze and jobs than higher salaries but no jobs.
94% of the workforce agreed.

Which just shows. 6% of any group are idiots.

1. Is forcing all services in Wales to offer Welsh a waste of time & money, when hospital budgets are strained? (bit of local colour!)
2. Greece/Euro, again. Yawn.
3. Unemployment down slightly, Vauxhall - are we on the verge of recov - wait a minute, what the hell am I thinking, this is the BBC. Ahem. Evil Tories, double dip. Yes, that's more like it.
4. Severn barrage - bad for wildlife! CO2 from the concrete manufacture! Don't do it!
5. Should the policemen booing at Theresa May be arrested under sec 5 of the public order act?

- Euro coming apart. Is it better to push the Greeks out before they take the Spanish down with them? Or is it better to buy off the Greeks with a trillion German euros..it'd be cheaper in the long run.

- Vauxhall car plant and better employment figures. Is the double dip already over? That was quick?

- Mervyn King and how the Jubilee is going to push us back into recession.

- Green energy subsidy. Well its Cardiff. They talk about nothing else.

2. Why doesn't Dave break into the conference room and just tell those Euro peeps what to do to sort out Greece and the Euro, like Ed would if he was PM?

3. Should all policemen be forced to take Statins once they reach 50?

5. Was Aguero's finish the sweetest thing anyone (except a United fan) has seen all year?

Hain's easy - just put in his quote at the Welsh conference about Albion Alliance and me - a dangerous, far right-wing group dedicated to bringing down the UK. Yep, I can run with that.

1) Will Greece be able to call Germany/ECB's bluff & renegotiate the bail out terms given that they owe so much money to them?

2) Spain's bank crisis: is any kind of Euro-fudge possible to save them?

3) Severn Barrage: a proper Keynesian stimulus or an eco-disaster waiting to happen? Perhaps we should reopen the South Wales collieries instead?

4) Poor Rebeka being victimized by that nasty inquiry man. It shouldn't be allowed, should it?

5) Yet another stellar week for T.May... is Dave just keeping her around to act as a lightning rod?

1) GREECE Germany and their banks and the Euro seguing into Dave and the Euro disaster planning thing (none so he blathers).

2) Hague "Bosses should work harder, or is he being vague again?

5) Do politicians (Hain in particular tonight) not have freedom of speech?


Throwaway) Should contestants compete in world famous on-line competitions when they don't know the rules? :)

1. Should we be doing more to stop the Euro falling apart?
2. What can we do to get more high-tech companies like Facebook in Wales?
3. Unsafe murder convictions - can we trust the police and prosecutors?
4. Why did getting bilingual public services take so long?
5. Will Rebekah Brooks sink the Coalition?

1. Gordon Brown says that the recession started in America, D Cameron now blames it on the Euro-zone. Who is right?

2. Railway extension Cardiff to Swansea, when's that going ahead? or is the victim of Savage Tory Cuts?

3. Will there be more revelations in the Brooks Witch-Hunt, are the pol's too close to the Murdoch Evil Empire?

4. Severn Barrage - why can't they use barrage balloons like in WW2, that kept The Hun at bay.

5. That mother in America who's obsessed with tanning parlours who nearly roasted her daughter alive - can you explain how people get so addicted to it? This question is for Peter Hain.

1) euro: is Dave right to be wetting himself in public over this
2) severn barrage (of course they shouldn't, the Orange One has a vested interest but they probably will) - probably raised under the colours of a slightly different energy question, e.g. welsh nukes @ Wylfa, welsh windfarms everywhere
3) is Facebook really worth 2 gazillion?
4) car jobs, should workers really be prostrating themselves before the capitalist juggernaut? (ans: duh! ye-es!)(joke)
5) wildcard: can we stay in Afghanistan when the locals are murdering Our Boys ?

Grab your torch and pitchfork, it's the monster raving looney welsh edition..

1. Cameron/benefits/blind people losing out. Is Cameron a rich bastard? Yes he is. And is demonising folk on benefits responsible for kids dying in a house fire in Derby? Cameron should live in a tall tower. Oh he does, an ivory one.

2. Rebecca Brooks - how can we trust justice and the establishment now? Cash for questions, they're all corrupt and that was the ride of Cameron's life. Did Brooks spend her youth in a dragon guarded castle? Should Prince Charming have left her there?

3. Striking - is it the privilege of the few? (Ogres can't strike)

4. Statins and the cost of drugs. Would we all be better off eating weed rat stew?

5. Some welsh bollocks? Vauxhall and euro-all happy now? (see what I did there? I'll be here all week. Try the veal)

4) Dalglish &/or Olympic bag of spanners

1. Europe. I know I say that every week, but surely with so much to choose from austerity / Grexit / France / Spain / Bankia / Bank jogs etc...

2. Is Cameron right to point to the example of European austerity being why we should stick to austerity?

3. Are disabled people paying for the financial crisis?

4. Rebekah Brooks may have been caught dumping laptops, but I'm sure she had a perfectly innocent reason for it that the CPS is too vindictive to appreciate. LOL indeed...

5. Something Welsh and green.

The scoring this week is a match pair. Contestants take on each other. This week its the highest placed from last weeks winners table vs the next highest.

So its Measured Vs Dick the Prick.
BQ Vs Philipa.


First Q: Do you agree with home secretary when she says “police officers should stop complaining about being picked on”?

My sympathy for the police has all but drained away. They are on a whopping great deal. And someone is coming to grab a handful. They will still be on a great deal.
Retire at 50? Surely its not beyond the police fed to negotiate a deal whee members no longer are beat officers after , say 55? But no auto retirement. Its crazy. HMG paying out 40 years of pension / police.

Q2: David Cameron told Europe to make its mind up, what choice has he given UK voters on whether we stay or not?
Nice splitting question. Hain was at his disingenuous best. Labour would like to have had a referendum. Bollocks! Utter utter lies. Apart from UKIP no party will ever allow a referendum. There is no interest in being outside of the EU.

Q3: In light of Mervyn King’s comments this week about its negative effect on GDP – should the Jubilee bank holiday be cancelled?

Times rich list has been bashed all night. No welsh on it then?
Audience is right that the govs strategy for growth is lacking. They took a long, long time to even acknowledge it was needed.

God knows. Let the Scots try it out and see if it makes a difference.

Q5: Are relations between politicians and the media appropriate?
thought that there would be no Lol gag. John O'Farrell just got it in.

Q6: With the Olympic torch coming to Cardiff next week, why should Wales get excited about London’s games?

A sneaky 6th from Dimby. Shame it was such a crap one.

I don't know much about the new scoring system, but I think I like it.

Boo hoo, I missed all the fun!

but Budgie..the soccer scoring system means its easier to catch up!