Reshuffle {2} Who's not fit for purpose? 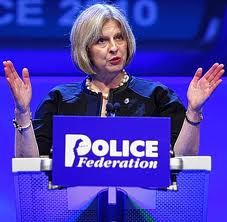 Not many people fancied Ken Clarke for chancellor on the last reshuffle post. But even fewer wanted George Osborne to continue. So Ken gets the job.
With reader apathy in play about what useless politician should get what non job, we'll skip on down past the list of ministers for nooks,crannies and corners. Ministers for Country and /or Western, etc, straight to the important ones.
Home Secretary Theresa May has not done well. She started brightly. Promised to cut police red tape. To make flabby cops get out from the admin block and onto the beat. Inflict tougher sentencing for menaces whilst in possession of a hoodie. It all came undone quite quickly.

The 'Tough on Crime' platitudes sounded a lot less convincing 15 years since they were first expertly, but insincerely, announced. Before long the ECHR and their poster boy, Abu Qatada, was making the UK look foolish. Mrs May looked particularly weak and  incompetent when her department didn't know what day of the week it was. Soon she had the immigration head in tears and arrivals desks with queues stretching all the way to the original departure country. Illegals absconding. Student disorder. Uncontrolled rioting. Full prisons and all the usual Home Office 'not fit for purpose' failures.

Mrs May has not fought her corner well. Shocked as I was to discover the super generous rates of pay and incredible pension deals of the police force, it is still an Olympic year. There had been the worst riots in 30 years. Public order protests are on the rise. Not just the usual tambourine band, free Pinnochet save the eels types. Serious, union backed and organised marches. All poised to disrupt the nation. And there have been a new band of 'Swampy' old style, hippy, campus sit ins.

Yet the police had to take a substantial, and wholly unwelcome hit from the public spending cuts. They did not react well. Theresa seemed unable to convince them that it was in their own interests. That if every copper got a £80,000 pension for 40+ years, police costs rise above budget, it would leave no police to police. Our police force would be a retired one.

Elected chiefs. Changes to hours. Changes to rest periods and a monotonous and largely disbelieved refrain from the home office that these cuts should have no impact on front line policing.

As in every public sector organisation, the bosses decide where the cuts come from, not the minister.
Certainly no cuts to the Chief constables Range Rovers. Not the all important diversity and equality unit. Not to the fishing teaches patience training days. But to somewhere where it hurts. Why she ever imagined it would be any different in the police as opposed to a district council is a mystery.

Now, the police really should have to trim their budgets. Should be made to face up to the pension reality that has been ignored by all parties for 40 years. But they should have had some leniency. Some capping of their cuts. Same with the border force. If you want people to present a shining example of a modern democracy to millions of Olympic tourists, its probably best not to axe jobs, take pensions and raise retirement ages first.

Anyway.. with cuddly Ken in the treasury, who could take her place?
Another woman would be politically preferable. The last two having not performed so well, the ladies now need a big success for the feminist cause. But a look at the current cabinet shows just five women. Four of whom { Sayeeda Warsi, Caroline Spelman, Cheryl Gillan, Theresa May} will be very lucky to keep their jobs in a reshuffle. And if they do will only be because it would bring up the misogynist Dave tag again if he knifed all his babes.

So that leaves neophyte, but capable, Justine Greening. Currently at transport following Phil Hammond's promotion after the Fox affair she was formerly a junior at the treasury. It would be a huge, huge promotion.

Well...she can't do any worse than May or Smith, can she? 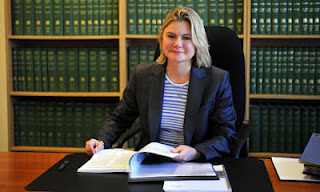 Oh yes she could. It is always possible to get a worse minister.

If we can't have Ken Clarke, why not John Redwood? He's sound.

There are not many senior Tories left in the HoC who did a good job in previous Tory administrations, Ken did quite a lot of jobs under Maggie and Major and inspite of what people on various blogs say seemed to do a good job. Redwood held a few jobs in the previous Tory governments not so sure that he was particularly successful (memory not so good these days). Justine Greening she has got an economics degree but not from Oxbridge nor has she been to a big public school so she might have a touch of reality about her which seems to have been lacking for the past 15 years.

Or how about Redwood for Chancellor and Ken for Home Secretary?

Sorry no suitable women at the moment.

David Davis would make a far better Home Sec. than most of the muppets I've seen on TV.

As for Chancellor, what about picking an MP that has some real-life commercial experience... BQ?

Not many people fancied Ken Clarke for chancellor on the last reshuffle post. But even fewer wanted George Osborne to continue. So Ken gets the job.

Neither - it needs a dry EUsceptic.

A couple of years ago I was at a dinner party where an attendee was a Stockholm copper. I was amazed to find that the normal police retirement age was 65 in Sweden.

How and why did we get into the UK situation?

I am acquainted with a charmless oaf who did his whole stint in traffic and was re employed after retirement in some higher paid position. He was well chuffed. I was not.

The election of PCCs is a certain train-wreck for the Home Office.

Instead of 'sound' Tories to get tough on law'n'order, these posts are looking like sinecures for washed up NuLabour folks, as the few voters to turn out in November treat it as a chance to make a protest vote against the Condems.

The ideologically driven move to break up the Police quangos and outsource all civilian jobs isn't looking too clever either, as skeletons fall out the G4S cupboard and IBM's outsourcing in Avon & Somerset falls apart (readers may recall the Chief Constable's wife received £200,000 in consultancy fees...from IBM)

"the police had to take a substantial, and wholly unwelcome hit from the public spending cuts" ... actually Cameron spends more than Brown.

As for the Home Office being not fit for purpose, they are like another two un-named government departments I am aware of - they have their noses so close to the paper to make sure that they cross the t and dot the i, that they don't realise that what they have written is 'shit'.

Did anyone consider that Justine Greening, Secretary of State for Transport whose constituency is Putney, might have vested interests when it comes to a third runway at Heathrow?

Doh. Nimby, yet far more important to the future of the UK than HS2.

In truth the Tories cannot handle any of it. I doubt Thatcher herself could.

What an example set by bankers, professionals and politicians.

The unions really aren't the bad boys of this era. In the 70s the most their members aspired to was central heating and double glazing. Their Trotskyist leaders brought the British economy to the brink.

The ruling class of this era aspire to the price of a Sunseeker Predator super-yacht (every year)and have brought the whole world economy to the brink.

I fully understand why unionists representing ordinary workers these days might balk at the idea of being told that they must exercise restraint by people who have behaved like common spivs and torn the arse out of the system.

SW: Mr Redwood is rather too eurosceptic for Mr Cameron I think

Anon: not many to choose from. Liz Truss is the other. She may get a ministers post. Culture and media I shouldn't wonder. Once the Olympics is out of the way, and now BskyB is off the table. plus no possibility of Uk bidding for any other high profile sporting events, its a non job for decades.

Jan. i feel the next home Sec should be a woman. Unless the next foreign sec or chancellor is.

GSD. It might be fantasy cabinet but David Davis is Cameron's bitterest rival. He'd rather give the job to Miliband.

JH: Europe seems to be off the table at the moment. Cameron wants to keep his U-turn options open

Anon 8:46. Retire at 65? In Sweden. Those horrible progressive Swedes.

The usual argument is would you want a firefighter/policeman to still be walking the beat at 60? Obviously not. But then in civilian life if you work on a building site, after 20 years you'd expect to have progressed beyond a basic bricklayer and have some other skills to use. Mrs q's dad came from ireland in the 50's and worked on building sites. He eventually became one of those high rise crane drivers. Skilled worker.

i was quite in favour of elected chiefs. I'm tired of police forever worrying about New labour gender targets or multiculturalism.
in my village home there are no police. residents pay the same council tax as any one else and yet there are no police at all. even the PCSO is a once a fortnight person.
Nothing like requiring an election to focus the minds of the commanders of the boys in blue.

former politicians should have been expressly forbidden from standing.
Making it party political is a nonsense.

Budgie. Have you seen the stat for the Israeli MOD procurement team?

Measured. I'm sure she'll be totally impartial. as are all MPs!

EK: there seems little doubt the unions are politicising. Having had to follow new labour's success and stay in their box for 15 years they were desperate to jump out and do battle.
Its going to end badly. Cameron needs a victory and battling unions who's members have higher pay, easier working conditions an larger pensions would be his dream target.

I'm 20% down on income since 2009. I'd support Dave, even though I can see he unfairness of taking pensions and scrapping deals.

There is not a single person i know in the private sector who hasn't at some time been told that they aren't going to get their bonus that they've achieved. Usually sales related too. Don't like it then bugger off.
Oh, and your pensions gone too.

Mark Sewotka desperate on Saturday trying to say his members would only strike if forced. yet he called the strike.
Dave would love for the Olympics to be mildly inconvenienced by union mischief making, Love it!
Its his 1983 route back to power.

I tend to agree that May has been handed one hell of a poisoned chalice and in the circumstances hasn't really done too badly with it. Most of what went wrong on her watch wer NLabour planted time-boms that blew up in her face when nobody expected it. It is not as if anyobody was warning about riots, police pay, immigration officers etc before she found herself fire-fighting.

Furthermore, consider this. Is it not entirely possible that those on the radical left are stirring up a lot of this? It does seem rather coincident with the Tories gaining power and it isn't as if they don't have form.