'Give him a painting of a spitfire and let him go.' 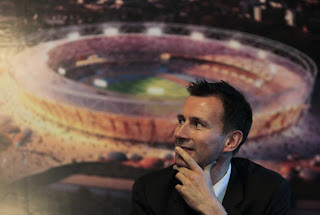 Continuing our look at the upcoming, long delayed, and desperately needed cabinet reshuffle.

Jeremy Hunt has been on borrowed time ever since he took a less than biased view about whether Rupert Murdoch should be granted his wish to buy out BSkyB.

Although no smoking gun was found Mr Hunt only hung on to his ministerial car because the PM was in charge of deciding who had acted within the rules.  At best Hunt was unwise. Cable was quite rightly removed from the bid for showing bias against NewsCorp. Hunt showed a lot more bias in favour.
Cameron had just lost Huhne and didn't want another tricky one for you, one for me coalition ministerial job swap to deal with. So Hunt remained.

Jeremy Hunt was the minister for the Olympics. The Olympics will soon be completely over.
The UK's bid to host the Euro soccer tournament ended in farce, embarrassment and a failed attempt to bring down the corrupt FIFA heads. We won't be bidding again.
We won't get the Olympics for another 50 years at least. We can't do winter games. The Ecclestone Grand Prix London, £100 million proposal, is several zeros short of being realistic.
Tennis, Rugby, golf and the Premier league all take care of themselves. Culture can manage with a deputy, deputy minister and media isn't going to be doing anything at all until everyone has forgotten about phone-gate.

So there really is no reason that Mr Hunt should retain his post. He did manage a good Olympic show so, in the fitting words of Steve 'Alan Partridge' Coogan, 'Give him a painting of a spitfire and let him go.'

I had pegged Anna Soubry, a Cameron favourite and someone who ticks just enough boxes to take the non-post. But rumours are leaking that Cameron is preparing to axe the entire department. He could gently rid himself of 'nothing wrong' Hunt. Remove the poisonous Murdoch media issue from government to quango. Appear as if he's finally getting tough on his promise to reduce the Brown style government overspending. And, with the abolition of CM&S, claim that the money saved by axing an entire department would be used to pay off the over budget cost of the Olympics, gifted to him by Labour.

Its a sound political strategy.
Wonder if he'll actually do it?

"Although no smoking gun was found Mr Hunt only hung on to his ministerial car because the PM was in charge of deciding who had acted within the rules."

And, also, because it's none of the government's damn business whether private investors buy more shares in the private company that they have already invested in.

Especially when that same government props up a competing near-monopoly by forcing ordinary people to pay for it through extortion—sorry!—the telly tax...

Cameron won't do it because he's a lazy spineless lump of jelly, a Heath-without-principles-or-brains. The old sailor boy may have been a toilet-trading traitor, or he may not - I couldn't possibly comment- but at least he cleaved to giving away our sovereignty while surrendering on nearly every other issue.

"Wonder if he'll actually do it?"

I hope he scraps the whole department...we need to save taxpayer money somehow

And also scrap the DfID, and any branch of government (local or national) that has the words "climate change" or "diversity" in its non-job description.

His constituency is just up the road. Is the A List dead? Can proper old backwoodsmen apply? Will they notice I resigned my membership in 2009? I'll give it a shot.

What effect will the Ecuadorian thingy have on this, do you think?

Fiddling with CM&S while the Treasury burns?

Gideon is clueless about dragging Britain off the bottom of the recession, while the storm clouds of Grexit grow and the broken-reeds at the BoE puzzle over job growth and GDP reduction conundrum.

The Condem's have a vanishingly small chance of getting to 2015, while Cleggover eyes a tax-free sinecure in Brussels.

Mensch has bailed out, smart enough to see the inevitable train wreck that lies ahead.

Meanwhile the sheeple have no idea that their standard of living by 2030 will be well below that of 1930.

We recently went through a face lift at our house. We had to hire several different contractors for our projects. This is the only contractor that I am giving 5 stars. Industrial painting