How We Love The BBC 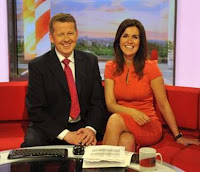 And not just for its industrial-scale tax-dodging exploits.

Prepping for the QT quiz on Thursday, and being in Dublin, I reached for BBC breakfast TV; and there was a sober item from Southampton University. Apparently there is some daft new government scheme tightly regulating what A-level requirements universities can now make, and in Southampton's case this has meant, unexpectedly, an intake of 600 undergraduates less than anticipated.  They say that the kids they were unable to extend offers to were genuinely uni-material; and that the budgetary impact of being 600 down is a real problem.

The in situ Southampton interviews were conducted against a back-drop of student breakfast in a University refectory, where various details of the breakfast fare on offer were incidentally on view.

Now I don't know the rights and wrongs of all this - it's a BBC morning TV 'package', after all - but the issue did indeed seem to be a serious one (here's a related Grauniad piece if you're interested).

So then they cut to the studio, and our sofa-borne hosts respond thus:

PAYE scandal ?  How about - why do these people get paid at all ?

I've given up on breakfast news/tv from the Beeb.
It's so lightweight I think Timmy Mallet and the WAC would be an improvement.

Do the sofa sitters know the difference twixt a refectory and a canteen?

or indeed buttery; but it was Southampton, R U S-C!

Not only is the BBC the biggest broadcaster in the UK, but it receives a tax payer subsidy (yes, it does - if you don't pay the tax you cannot watch any real time tv, not just the BBC).

I agree BBC Breakfast has dumbed down a lot in the past couple of years but I do usually put it on first before switching to Today on Radio 4. I like to see a) who's presenting that day and b)what they're wearing (shallow I know) but what I find intriguing is that the guest usually hot-foots it down to the radio 4 studio after BBC Breakfast so you get to hear them again (today was Teresa May). They usually get more of a grilling on Today. I also nearly gave up on BBC Breakfast entirely during the Olympics as it was approx 95% Olympics and 5% everything else.

Knowing a local BBC TV presenter (in a social sense, obviously) I can indeed confirm that the BBC employ them soley for their robotic vacuousness and their inability to understand the simplest forms of logic, irony and the British quality of dryness.

How about - why do these people get paid at all ?

Exactly - volunteerism is very popular at the moment, I believe.

Where else do you suppose the BBC gets its "news" and opinions from ?

The iPlayer really is very good. And even though the Olympics was too boring to watch the BBC's streaming setup was very impressive. Not even any of the American stations have services even remotely as good as the iPlayer. (Despite what you may have heard, even Hulu sucks.)

So I say privatise the BBC, make it entirely digital, and let them sell subscriptions to anyone in the world. Stop wasting money on TV and radio and spend the money on broadband and 4G instead.

In 15 years, even digital TV is going to look more pointless than Channel 5.

Electro-Kevin said...
This comment has been removed by the author.
10:19 pm

I thought it was quite a clever comment actually.

The prospect of cheap breakfasts might make the students consider taking on the tuition debts.

One of our problems has been sending too many young people to university.

Maybe they were the same idiots who totally failed to present the Queen's Jubilee river pageant, turning it into a sort of more-ignorant "Blue Peter".

Stupid self-centred uneducated ignoramuses, every one.