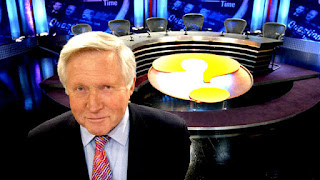 Its that busy season for me - Halloween into Xmas. So ..sorry for the laboured title.
Bonus point for whoever can do it better.

This week's early bird is Mark Wadsworth.
But he cannot claim first place this week. That goes to whoever posts next.

2. Energy company rip off, why does faster switching make it better? You just get ripped off faster! Green taxes.

3. Those bloody Yanks, you just can't trust them, eh? Did they all used to work for News Of The World or something? Who says they didn't hack Cameron's phone - or is he simply too unimportant to bother with? And why are they going to deport that hacker chappy, what he did was no worse than the Yanks.

4. What are people on the panel doing to support Children In Need?

Can they really do the hacking trial? I say not

1. have the weather forecasters got their act together these days - or do they over-react in over-compensation?
2. some twist on the energy price thing yet again (Labour's spinners will have been badgering the beeb non-stop for this)
3. that Baby-P woman's extraordinary pay-off
4. does the Syrian chemicals disarmament represent victory for moderation / the west / russia? a precedent for worldwide disarmament?
5. HS2 again (yawn)

they SHOULD be debating Unite's extraordinary behaviour - but I doubt it

Tough one this week. Not a lot has happend... or I've been too busy to notice.

1. Who is the panel's favourite hacker? The News of the World journalists, Assange, Snowden, NSA, GCHQ or David Lightman (War Games reference)?

2. Energy prices are still a bit high - how much longer until the press get bored and decide to change the subject?

3. Are the panel pleased that 300 years of press freedom are coming to an end?

4. Are the Unions getting too big for their boots or do they lack the power to address their member's legitimate concerns?

Only four this week.

On the union point KT, notice that the CWU have called off their 78% supported strike.
Recent reports back from the shop stewards showed it would be likely less than 25% would actually down mailbags on Monday.
CWU smart enough {for once} to realise Royal Mail management are desperate to give them a deal in exchange for no bad striking publicity post privatisation.
In fact RM had already promised 8.5% pay deal.

Anyone else getting that? + free shares? + a {limited} job guarantee?
CWU .. take the offer. Its one of the last times you will have the power to cut a good deal

1. Cameras in the Courts. Pull up a chair folks.

2. Royal Charter for the Press. A year to find a panel and yet it has been done all so hastily. No more on MPs’ expenses then.

3. Privatising Search and Rescue. At present when called upon the lifeboat is undera legal duty to attend unless for operational reasons but the crews are too honorable to demur. Now we face health and safety considerations coming first.

4. Insulating your home with tin foil and cardigns.

So many of these issues depend on balance and when the scales get overloaded or played too safe, there is change.

Tie: A vivid orange on a dark background….it’s a spooky night.

1. Is a Royal Charter for the press much-needed regulation or a political straitjacket? (kudos for any panel member willing to mention the attempted Eye takedown).
2. Is GCHQ doing the dirty work of the NSA, or are both agencies just doing their job?
3. Does changing energy supplier make any difference?
4. Unite overstepping bounds with family intimidation (bunch of lightweights, whatever happened to torching cars and breaking kneecaps?)
5. Should we prosecute soldiers for whacking enemy combatants?

1) NSA/GCHQ et al phone hacking vs NotW phone hacking - apparently the phone privacy of H.Grant and his mates is much more important than that of world leaders.

2) Should a bloke who describes himself as an ex-politician be allowed to remain an MP? [G.Brown]

3) Will Davy's proposed energy market reforms help consumers at all? Or should someone do it properly?

4) Will HS2 get backing it needs to start?

5) Pension fees cap - should it be applied to all pensions?

and Dimbytie = pumpkin yellow with ghosts.

This is an entry for next week's compo, so as to get a point for first entry if nothing else:

1. Coulson/Brooks trial: was the mis-trial caused by media coverage or behind the scenes skullduggery?

2. Economy on the mend: should Ed Balls go home to spend more time with his post-neoclassical endogenous growth theory?

3. Unite/Red Ed/Falkirk, should Eric Joyce stand on an independent ticket?

4. Do the Sharia bond and Chinese nukes signal THE END OF BRITAIN?

5. No fifth question has been approved by the Politburo.

1. The newspapers: they deserve everything they get don't they?
2. Energy bills: why are the companies allowed to get away with it?
3. Is there a better way to blow 40Bn quid than HS2?
4. Should we be spying on friendly governments?
5. Is Unite a sad relic of the 1970s or are unions needed more than ever?

1. The law won't be lectured to by politicians. Is it a great victory world freedom that work for benefits has had a set back?

2. And the same again, but on hospitals.

3. Royal charter. Phone hacking. Old news. Lots of local papers in Cornwall. No one has ever suggested that they were paert of the phone hacking culture. So why should the 11,000 odd 'local fete was success' says Vicar papers have to comply with Leveson?

4. Power/energy and switching in 24 hours will reduce your energy bill...in some way that is as ill defined as Miliband's price pledge. I think the answer to both is 'by magic'.

5. Must be a gay question. Can't really think of one. Maybe the ONS gay couples living together up by a third stat.

OK my bitchy comment looks even weaker now I've read the tiny faint text at the bottom of the post.

My questions for this week are:

1. Do the Roma children taken into care in Greece and Ireland show that Europe is still a racist continent?

2. Economy on the mend: should Ed Balls go home to spend more time with his post-neoclassical endogenous growth theory?

3. Unite/Red Ed/Falkirk, should Eric Joyce stand on an independent ticket? Can Ed Miliband stand up to the Unions? Do we want him to?

4. Do the Sharia bond and Chinese nukes signal THE END OF BRITAIN?

5. No fifth question has been approved by the Politburo.

Damn! I've just read on the BBC that MPs have already voted on HS2 - they don't call me finger-on-the-pulse George for nothing!

4) will the new press laws stop the MP Expenses/NSA bugging/Cash for questions/Cash for honours type questions?

1. Did Andy Coulson and Rebekah Brooks have an affair on the HS2 for six years? Even though MPs have only just voted the first tranche of taxpayers' money for that gravy train?

2. Syria: equipment for producing, mixing and filling chemical weapons has been destroyed. But did Andy Coulson and Rebekah Brooks have an affair in Syria?

3. Press freedom to end with the press controlled by politicians. Was Andy Coulson and Rebekah Brooks' affair to blame?

5. Evil extreme right Tory toff Cameron attacks workers' representatives in Grangemouth, not far from where Andy Coulson and Rebekah Brooks had an affair. Should the bosses hold the public to ransom, or should it be only trades unionists?

Fascination is a terrible thing.. I'm building the company's first 3D printer during the evenings (just 'coz I want to know how) and lost track of the time :(

Well..fell asleep before the news finished. Woke on sofa at 2am. So...
will look into iplayer/twitter later on.

I got caught out, too late to enter, but unfortunately heard the programme on 5 live. Excruciating. Let's hear it for Bill...he watches so we don't have to.

So - Dimby had a purple and black ghoulish tie.

Q3 With wind turbines and solar panel fields impacting on our countryside, are we seeing any benefit in energy costs. A slightly novel way of asking the same question for the fifth week running.

Q4 Why is Chris Grayling in so much
of a hurry to privatise our Probation Service that he is prepared to put the public at risk?

Q5 Is anyone served by the creation of a regulator to which no journalists will subject themselves?

Winner was DJK who will be updated in the tables later

It was wondering if I could use this write-up on my other website, I will link it back to your website though.Great Thanks.
http://www.youthbusinessamerica.com |

Superb article ,I really appreciated with it, This is fine to read and valuable pro potential,I really bookmark it, pro broaden read. Appreciation pro sharing. I like it
www.duracelldirect.org |