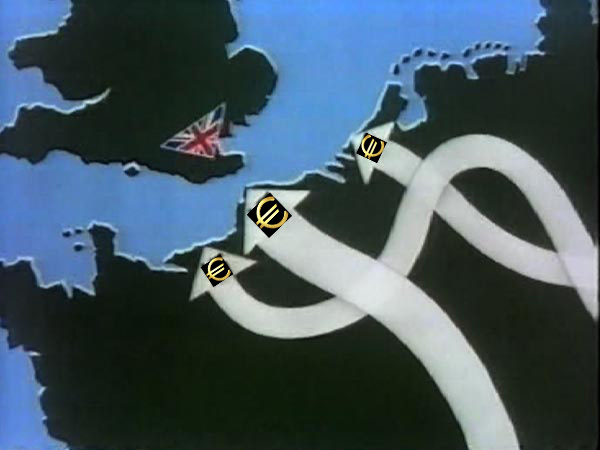 Regular poster TAFF on home turf is expected to ace the questions. This might be hard. QT has been going through one of its Two Ronnies phase.  Asking Questions from the week before. Or even, as last week, asking questions of no interest to anyone.

BQ thinks
1. EU-kraine. Has to be .BBC ignored it for 2 weeks already? If we believed in conspiracy theories we could say they were worried about  the millions they paid to broadcast the Winter Olympics -Putin etc.
2. Another scardey cat lawyer story from the nation's broadcaster. This one more reasoned. Its not really a proper story at all. Hattie Harman and her pieces of PIE.
3. Flooding . I thought it might be over but Miliband asked all 6 questions on flooding at PMQ. His activists will be scribbling in the audience.And a provocative eco question for Mel
4. Angela's Nein! Should Cameron accept that the EU don't think he will be leader so feel no need to accommodate him and just switch to UKIP's plan of a plain old in/out referendum within 3 months of the next parliament?
5. Hyde Park bombing. Right to resign?

Is this the foul woman that made obscene gestures on Marr's show???

Don't know who you mean.
About 5 years ago I decided that Marr's show was so lightweight that I'd rather be asleep and have never watched it since.

Tie: A hideous combination of grey and purple.
1. Scots pound/companies moving to England. Is Salmond right and the RoW wrong?
2. Is Dave right that manmade global warming is the biggest problem of all?
3. EU Northern Alliance. Yet another HMG fantasy to put Britain at the heart of Europe?
4. Ukraine. What should we do?
5. Floods: do we blame Labour or the Tories?

Mad Mel might make this interesting, if any of the others provoke her.
Dimbletie: neutral dark green.

1. What should we be doing in Ukraine to stop the human rights abuses there? (I see the EU has wheeled out Cath Ashton, that should get Vlad quaking in his boots).
2. Post the Lee Rigby trial, should we be doing more to engage disaffected extremists? Does the IRA count?
3. Should we be concerned at Welsh hospital death rates?
4. Could fracking in Wales be the new coal?
5. If the Yanks are scaling down their military, should Britain and the EU be scaling up theirs in response?

Welcome to Wales and here are my questions.

Politics: Can the Tories can ever be the worker's party?

Courts: Have the courts been too lenient on the murders of Lee Rigby?

Bankers Bonuses: Will others follow the HSBC example and find ways of paying out massive sums of money

Bankers Bonuses II: Should the former directors of the CO-op be shamed into repaying their bonuses given the damaged they have done to a cherished institution.

Independence: Will we ever be rid of Scotland and could we add on England and Ireland too? I'm not in favour of Plaid Cymru but if the other two countries were to follow Scotland I don't see us complaining.

1. Isn't it great that Pinewood Studios are opening up near Cardiff now that the stupid NIMBYs near London turned down their planning application.

2. Merkel, Cameron, EU, burble burble. Maybe tie in with Ukraine, put our petty differences aside and get on with expansion - the EU is like a bicycle, it only stays upright if moving forwards.

5. How do the Welsh feel about this whole Scottish independence thing? Would they also be bullied into submission with vague threats?

(0) dragon-red
(1) Ukraine (please?)
(2) immigration figures
(3) is it ever right to rule out coalitions?
(4) legacy of Good Friday agreement (& WTF is Robinson threatening to resign for? Looks to me like a man who's looking for an out for some completely different reason)
(5) FGM

2. U kry if you want to. EU eyes up new markets, Russia eyes the Baltic and the IMF buries its head in its hands.

3. Was it an amnesty? Of course it was an attempted one, otherwise the Agreement wouldn’t have been signed but moving the carpet has exposed them. Totally unconstitutional and underhand. That’s Labour for you but it did bring peace in N Ireland.

1. Northern Ireland: get out of jail free for Marxist thugs given by Marxist fellow travelers?

3. Harman, Dromey, Hewitt - did their virulent Marxism blind them to PIE (as in 'we will bust this bourgeois society with anything that comes to hand even PIE')?

5. Have the Welsh anything to learn from Salmond the Joker's inability to think anything through?

Q1 Why is RBS paying bonuses when they have lost money?

Q2: Should deals made with IRA still provide immunity from prosecution for alleged terrorists?

Q3: Is it not time @HarrietHarman came out and apologized for links with the Paedophile Information Exchange?

Q4: Has Britain lost control of its borders?

Q5 - fell asleep but it was something about NHS Wales mismanagement.

No Ukraine AGAIN? What is going on?
Dimbytie splits between Measured and Djk.

Scores
BQ - 2
DJK - 2+1 for first = 3
Hopper - 2
Taff-2 +1 for the only banker bonus spot =3
MW - 3 {why was Pinewood rejected? My brother used to work there.Bonus question. Why did George Lucas earn even more money than he expected making Star Wars at Elstree? And which actors received the most money?}
Nick Drew - 4 {No Eukraine?]
Mt good effort but -1
Measured - stompin' - 7
Budgie - good 4

Winner is measured, who leaves us all behind.

Prize is to referee the PIE debate.
Shouls
A} Harman apologise and resign
B} Daily Mail apologise and fold up
c} Hattie and Dacre fight to the death.
{if you choose C you must provide a female and male household product to use to fight with.}

What a fabulous prize. Has to be option C, BQ.

Harriet armed with an aerosol of Mr Muscle Oven Cleaner (full of caustic soda) against Dacre's pink spray bottle of Vanish. The money is on Harriet.

Agree . Dacre has a bullying reputation but I bet Harpy has quite a mouth on her once she gets going.

BQ: "why was Pinewood rejected?"

Pure unadulterated NIMBYism, you can Google it.

The authors were a bit baffled as to this, but suggested that one factor was more owner-occupiers = more NIMBYism = fewer new businesses opening up.

The Pinewood example illustrated this very nicely, thank you very much.