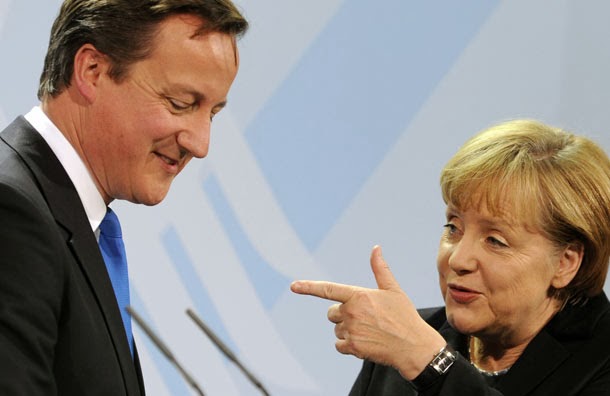 "Some expect my speech to pave the way for a fundamental reform of the European architecture which will satisfy all kinds of alleged or actual British wishes. I am afraid they are in for a disappointment. "Others are expecting the exact opposite and they are hoping that I will deliver the clear and simple message here in London that the rest of Europe is not prepared to pay almost any price to keep Britain in the European Union. I am afraid these hopes will be dashed."'

Angela sat on the fence in a very stateswoman like way. No offence given and no promises made to anyone. A little promise of some future bargain, of an unspecified nature on yet to be thought about terms.

Give it up Dave! Its not working. The idea of promising the electorate a future referendum but first demanding the EU change had some merit. We would all be better off if the EU worked better. Wasn't so protectionist. So bureaucratic. So regulating on unnecessary details and so lax on the important ones. If we could be part of a less idiotic union we would be much better off.
The agriculture policies and free labour movement being just two examples of areas desperate for reforms.

But it isn't going to happen.

As Mrs Merkel said the EU has bigger fish to fry. The EU crisis hasn't gone away and it can't be fixed until monetary union and a central control of Eurozone's treasuries and financial decision making is hammered out.  The EU is still not growing and unemployment won't come down. The European Union has a lot of work to do.

And the plan was flawed anyway Mr Cameron.
The idea that if the UK just threatened to think about leaving the European Union it would be enough to scare Strasbourg into submission was never very credible. Its the same argument with Scotland. Threaten to leave if you like. But you won't get far.  And anyway, when the push comes, not enough people will vote to leave anyway.
So it wasn't much more than a way of trying to appease the UKIP drifters even when the think tank SPADs dreamed it up.

And now, of course, 3 years later, its just never going to work.

Because you have made a future promise. No referendum until 2017.
Quite a clever idea initially. Make the eurosceptics stay onside until after the next election. Give Europe time to recover economically. Force Labour to say something about their policy on Europe, when the Miliband policy is to say absolubtely nothing about Europe. Make UKIP look like spoiled children leading the UK to exile over issues that the grown ups could easily resolve.

But, with the Tory poll ratings well below necessary, the other EU leaders have nothing to fear.
The chances of a Conservative majority are are almost non existent.  Even a coalition is only a remote possibility. And a coalition of Liberals wouldn't allow a referendum. Neither would a Labour majority. So why would any EU leader want to open up a Pandora's box of demands and changes when there really is no need?

So it's a non strategy. Not really keeping UKIPers from desertion or driving EU change.
And worse, the public don't buy it either. because of that whole Cast Iron promise thing.

That was technically not a breach of promise. But then, neither, technically, was the Lisbon Treaty.
But since Iraq political 'benefit of the doubt' has been rather lacking.

So give up this strategy. Just promise the public a referendum within 3 months of the next election. Demand the other leaders make the same commitment, in writing, on air, in manifestos or openly challenge them to what they are afraid of?  Eventually, Labour will have to agree, probably going along with the Liberals on a stay-in platform. . And that then might just be enough to retain some of those defectors.

At the very least, even a lost referendum would finally get the EU issue out of the way and prevent the Tory split party happening for a decade or two.

I'd be a lot more content if we had a fair referendum and the people voted to stay in.

A vote to stay in or out is as flawed as the Scottish case. People would be asked to approve the current arrangement or to opt for a leap in the dark, to leave the EU but without any idea of the new terms that could be in place.

- Would there be free trade or would Brussels "punish" an exit out of spite?
- Would free movement be allowed or would holiday-makers to Benidorm and the Dordogne need a visa?
- Would FDI drop off a cliff?

etc, it's like Scotland's "independence" vote, people are being asked to yes to something that even the SNP cannot deliver. Only with the EU and UKIP it's more about saying "no" and sticking up two fingers in protest.

And just as many English want Scotland to leave and taking their whinging with them, many in Europe want Britain to get out and stop blocking their plans.

I always presumed Dave was just posturing to keep that side of the party vaguely on side. Would be very surprised if he actually wanted any major change in our EU relationship.

What beats me is that there is only one way to renegotiate a country's relationship with the EU.

Which is - to invoke Article 50 of the Lisbon Treaty, which then initiates the procedures necessary for a country to leave the EU; said country can then renegotiate with the EU how it wishes to re-enter the EU.

Cameron's platitudes are meaningless, and they cannot happen without the above. Given that his promise of a Referendum AGAIN relies on the Tories getting a real majority and the party going along with it, and one can see clearly that this is all flannel, and further evidence that the political classes think we are idiots.

Electro-Kevin, we won't get a fair referendum if the recent BBC Have Your Say's rigged artical and comments section is anything to go by.

"there is only one way to renegotiate a country's relationship with the EU"
No, there is not just one way to merely "renegotiate".

"invoke Article 50 of the Lisbon Treaty [the Exit clause], which then initiates the procedures necessary for a country to leave the EU"
If we are leaving then Article 50 is surely the worst way to do it, because it leaves control of the process in the hands of the EU. In Article 50 we have to ask to leave and the EU goes away and decides the conditions; we are prevented from negotiating.

"Article 50 ... initiates the procedures ... to leave the EU; [we] can then renegotiate with the EU how [we] wish to re-enter the EU"
Are we leaving, or are we renegotiating, in this scenario?

Threatening to leave is an efficient way of getting the best deal to stay in. This is of course an irony that Cameron and numerous europhiles fail to appreciate. But for renegotiation there is no need to invoke Article 50 at all - because by definition we would not be leaving. Threatening to repeal the 1972 European Communities Act would do the trick, whilst allowing us some control of the renegotiation process.

Of course Cameron will do neither. He will no more invoke Article 50 than repeal the ECA if he is in power - he has said so. Nor will Milliband or Clegg. So UKIP is the only realistic option for EUxit.

But why renegotiate when we could leave? There is no real reason except for an irrational fear of the exit that seems to haunt so many - the fear of being alone, out in the cold, bereft of friends, no exports to the EU. This fear is completely imaginary - after exit, we would be friendly (or not) with exactly the same other nations, export the same (under WTO, not EU, rules), we won't move even a yard further away from any other country, and we will save an awful lot of dosh.