Still no party for AIM? 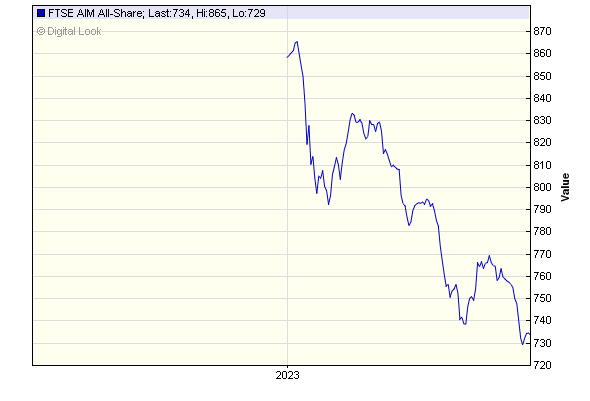 Back in the early 2000's there was a really fun and rewarding game to be played by investing in the AIM stock exchange. Small companies would list and either do well or fail. By getting in early plenty of investors could make or lose small fortunes. Thanks to the financial bubble and a willing list of foreign large companies ready to list (many of them in oil and gas or mining, with even more leverage built into their own business models), there was a lot of money to be made.

Then came 2008 and the party was well and truly over. AIM lost 75% of its overall value, compared to a FTSE100 down 40%. The flight from high risk companies was massive. if you timed it right there was a nice bounce through 2009-11 in which it was possible to recover losses or make even more.

However, the number of companies listing has declined and the days of large oil and gas explorers choosing AIM is over. A few make it and don't last long, like Bridge Energy, tipped here last year, as they are taken over by better funded competitors.

AIM has really suffered from the lack of capital available from banks for new businesses. It used to have a nice steady flow. Now there is none. So with it the chances of success fall and the prices of many AIM shares languish far below their pre-crisis levels, even as the FTSE100 is back to where it started.

Last year saw a decent-ish recovery, but risk stocks are still not popular. Despite this, the Government has made it possible to put  AIM share's in an ISA. They could not have timed that worse really, just as the mania is over and the index is suffering.

It feels hard to ever envisage a big recovery too with more downsides ahead. ASOS plc is a huge constituent at £5 billion valuation. If ASOS pls moves to the main index and FTSE100 then there is a big wipe-down of valuation to AIM. GKP is in a similar position, albeit smaller and is close to moving to the main index.

Longer-term though, illiquidity is the real issue. In an age of high-frequency trading and even small time traders going short an illiquid AIM stock can easily be manipulated to create sharp changes in share price. This volatility and unforgiving exposure has resulted in AIM companies perhaps being more fairly valued, but it means the upside is always vulnerable - making a buy and hold strategy pointless.

All this is a shame, as AIM is great innovation admired across the world (the US regulators hate it, a sure sign of envy) to get money into capital markets. These days it is crowded out by Private Equity and Sovereign Wealth Funds - which is a shame as these are hardly engines of wider wealth creation for the general populace.
Posted by CityUnslicker

Aim is a risk market and therefore is not the place for bank-lending its the home for equity. You have fallen in to the BBC/politico/moron-Cable trap of blaming banks for not lending to businesses which should be raising equity.

Which leads one to ask why there is not more equity around? Possibly because too many duds came to the market and even the reasonably successful ones (GKP for example) insist on using non-standard non-recognised metrics. There is a reason that Toronto remains a more liquid and trusted market 51-101 and some (semi)-decent regulation.

Ok ish point Ruminator. but if you can't borrow and you have to fund all equity then the dilution gets our off hand quickly.

Fair point re crappy companies coming to market and lax regulations though.

Does this mean you're selling up CU?

I do keep meaning to trawl through what's on the AIM these days and restart my ISA.

At least its not chock a block full of boiler room s**te and pension liberation shells etc.

I'm now not sure the place you are getting your information, but good topic. I must spend a while finding out more or understanding more. Thank you for fantastic information I used to be searching for this info for my mission.
www.gatewaycanyonairtour.com |

Quality content is the crucial to invite the visitors to visit the site, that's what this website is providing.
www.timetraveltoday.com |

A good informative post that you have shared and appreciate your work for sharing the information.
www.atcostructures.co.uk |