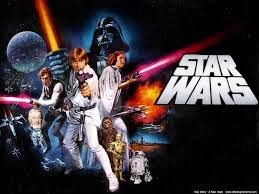 At a time when British cinema was making such Oscar winning films as Carry on up the Khyber and Confessions of a window cleaner, an American film producer decided to make a science fiction in 1970s, strike afflicted, punk haired, hooligan terraced, cold, dirty, divided Britain.

It turned out to be the most successful film ever made.

Elstree at Borehamwood was not the first choice of studio location. But England was.
England was much cheaper than Hollywood. Pinewood was 1st choice. The bigger, larger sound staged and better home of British cinema. But Pinewood had two many commitments already so film producer Gary Kurtz went all over Europe looking for a film set.

And he decided on Rome. He has very happy. Good size.Good facilities. Good tax breaks.Good climate. But.. poor sound. He said that the Italians dubbed all their movies so they were not careful about sound environment and everyone was always talking and moving and it was impossible to shoot. So back to London and Elstree. EMI signed a deal.

Elstree had been a film studio for a long while but had fallen on hard times and was making mainly  TV shows. The ITC company shows such as The Saint, UFO, The Prisoner and most ATV live shows were made there.  Many cinemas had been turned into BINGO halls. Cinema in the 1970s was, like everything else in the UK, on the way out.  A 1970 production agreement with MGM ended in 1973 and the studio almost went bust. Only the efforts of the management that stripped out a unionised and overmanned workforce managed to save the facility. it was re marketed as a FOUR-Wall facility. Common today, It was a very modern approach in 1973.
The studio provides the building, security, power and parking and the production company brings all their own technical, administrative logistical people and anything and anyone they need. .. British unions loathed the idea.
It all got sorted out just in time for Gary Kurtz and George Lucas to take up there with Star Wars.
They also got the Star Wars sequels and Stephen Spielberg brought Indianna Jones. That got them through the entire, dreadful, 1970s and built up what is today a world renowned specialist technical film making and production industry.

So it was with surprise that I was informed that Pinewood is to move to Wales. The county council rejected the studios desire to expand onto the green belt and so.. they have pushed off to Wales. Taking the Bond franchise and possibly the Star Wars sequels with them.
Its an astonishing bit of news. The Studio that has always been there building out a bit couldn't be considered because it was building on the green belt? Its not a lush valley all around it. Its an old landfill and a few fields.

The Economist was on Mr Wadsworth's side.

" the green belt,.. must be protected, says the council. Why should they care about the economic benefits of expanding Britain's film industry? Unemployment in Buckinghamshire is low; most of its workers are relatively well off.Yet this is precisely the problem with Britain's economy. In London and the South East at least, plenty of economic demand exists. All sorts of businesses could expand on the edge of London. Housing developers are desperate to build new homes for the workers. The primary block is the green belt, which mostly stops anyone building past an arbitrary line somewhere inside the M25. It is a bizarre remnant of 1940s socialism, and yet it is almost never questioned by serious politicians."

I don't know if I'd go that far. But I do know that if was a council leader that had a company supplying hundreds of high tech, high and low skilled graduate jobs, mostly for young people; and providing the sole work for many of the hundreds of associated technical contractors and computing component and film making small business; and their marketing and advertising people, and the local catering, cleaning, security, property rental, car hire, vehicle hire, plant hire, beauty, health, communications and recreation companies; I'd do ANYTHING in my power to keep that lucrative business in place.

In this country we pour millions upon millions into trying to make a jetfighter that no one but us will ever buy. To try and make an airliner better than Boeing's or a car that can rival a mercedes
That is hard. You need thousand of people to do it and all of them in all of the technical, advertising, production. logisitics departments have to be the very, very best.
Thoughts have to be given to power sources. Raw materials. World flux. Emerging nations. Security. You name it, and its got to be put on the list of things to think about. ITS VERY HARD.
That's why we did banking and services instead.

Yet for some reason Film making, or video gaming, isn't given a whopping great start up subsidy and told to go and become world beaters.
Just because the arts council decided to make hopeless politically motivated rubbish like Eat the Rich or Sir Clive decided to invent a pedal powered lawnmower doesn't mean we can't do it. Because we already have. Pinewood and Rockstar games. Osborne should have bunged the council a wad and told them to allow expansion under 'HMG special measures'.

Its just seems that unless something is going to use a lot of metal or employ a number of people using concrete in high viz vests standing around for years, like HS2, then politicians aren't that interested in giving out the big bucks.

I find your lack of faith .... disturbing.

Oh the memories ..... The actors in Star Wars when I first saw it looked, well, old, if not mature. Now they look absurdly young. Ah tempus fugit.

Star Wars worked because it was basically the Robin Hood and Maid Marion story set in the stars with dashing spaceships and quirky touches such as the animated chess (like) game, and the three headed singer (since cut for politically correctness).

However I am not convinced that building on green field sites is worth even Elstree, provided the business and employment is not lost to the UK. Isn't London big enough, after all?

But yes, politically (ie Marxist-lite) motivated people will be the death of this country.

I once wanted to have a large, complicated 3-D graph made up in perspex

so I went to Elstree - they did a really good job, very fast indeed

when I went to pick it up they gave me a tour of the studios etc: a sci-fi movie was in progress (Lost In Space IIRC) and I was amazed to discover that all those space-ship corridors, sliding doors, cabins etc were all of ply-wood + metallic paint

all the craftsmen were basically carpenters

I was also very impressed by the 'outdoor' sets (no-one actually shoots outdoors unless 110% necessary, too much uncontrollable stuff goes on) - in the flesh you'd say - how is anyone fooled ? but then they show you a clip shot from exactly where you've been standing and you see it's true: the modern 'outdoor' set is very different from those potted cacti and sand-on-the-floor of old cowboy movies

also impressive was the sight of hundreds of former British Arm Sterling SMGs being converted into Darth Vader's stormtroopers' gats (remember them ? mostly achieved just by leaving the folding butt in the folded position + a modern-looking sighting device on top)

bloody excellent afternoon out, it was !

Nick.
Harrison Ford , though well known to George Lucas from American Grafitti that they did together, was excluded from casting as Lucas wanted only complete unkowns for the American actors.

Ford was a failing actor but a good carpenter and he had plenty of work at the studios. His agent had him working at the location on casting day so George would see him.
And he got he part.

To the misfortune of Kurt Russel.

I've had friends and family working at Pinewood over the years.

Pinewood shed a lot of staff over the last 10-15 years due to ownership uncertainties. Many decided to move elsewhere or setup their own businesses.

A friend was at Pinewood about 2 years ago and said it looked barren. All the outside facilities had been left to the weather. General impression was that the studio was shrinking to a few core facilities.

All in all, most are surprised that Pinewood didn't close 10 years ago. Many prefer to work at the small London studios.

Its not a lush valley all around it. Its an old landfill and a few fields

It's mostly surrounded by Black Park, which they actually use as a film location all the time.

PS The staff cinema at Pinewood is/was amazing. It becomes apparent that most "consumer" cinemas must not have their surround sound setup properly.

Cardiff and Wales must be really pleased. They already do some lucrative TV eg Dr Who and Casualty (which was moved from Bristol). It could be just the shot in the arm they need.

When I lived in Cardiff there was a feeling around that English people thought it was like living in the sticks and in truth it was a bit until they had the foresight to develop the Cardiff Bay area. That kickstarted a whole lot of development and you wouldn't recognise the place from what it was when I first went there in 1977.

I haven't been for about 10 years. The dock building was going on then and the place had a good 'docklands' vibe. With the stadium and everything. And transport wise it isn't TOO bad.

A lot of retail was going in then though. Probably far too much even 10 years ago. By now it must have many many empty spaces.

A great catch though. For the reasons you give.

But just moving location is no guarantee of success. Cardiff will have to work very hard to retain the movies.it hasn't worked elsewhere. Film companies like to be in London.

My stepbrother is a credited editor on many of the Bond and Pinewood movies. He worked there on and off for about 10 years. As K said, it became more off than on and he moved on.
He did much of his work in offices in Soho square in London's west end.

Hello, I enjoy reading all of your post. I wanted to write a little comment to support you.
greencostaricahomes |

For latest information you have to go to see world-wide-web and on world-wide-web I found this web site as a best website for hottest updates.
http://www.inspiredbusinessconference.com |

Aim for a higher progress and development and work your way from those goals and plans. Interesting in here indeed. thanks for the share.
www.jamesdayphoto.co.uk |