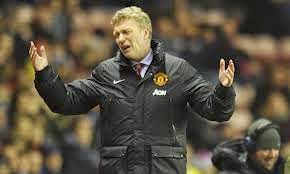 Tony Blair: {former Labour party now Republican}
Well, I'd say don't worry about it. I mean, getting pushed out a job in a field you've been in for a while isn't the end of the world. every cloud has a silver lining. Or in my case a platinum one. See what lies ahead. This may be the best thing that has ever happened to you.

David Cameron: Tory
I think its a bit harsh to punish a chap just because he didn't come first. Its a very difficult competition with two or three very tough teams. Coming top isn't essential. And Mr Moyes has had to contend with a resurgence on the right of Manorchester, at Manorchester City, eating into his core support as they adopt the short sighted populist policies of signing star players and winning matches. So bravo to David Moyes, a thoroughly good effort and one that should have let him keep his job for another go again next time.

Ed Miliband: Labour
I believe that it is very short sighted to sack a manager just because he is incapable of getting his team to perform at the level expected. I think that Manchester United should have looked to their history and seen that sometimes a new manager, especially one who had lacked top flight experience, should be given ten or even twenty years to fully bed in and demonstrate to the players that his totally new approach to winning matches by doing as little as  possible and conserving energy was the right course.

Alex Salmond: SNP
Its typical English bigotry that says that a Scottish manager must be sacked in case the 'No' vote doesn't go their way. I believe that an independent Scotland would have seen Mr Moyes returning instantly to his Glasgow homeland, and that's why he was given the push. Its a disgrace

Natalie Bennett: Green Party
I think it was inevitable and right. The only green thing about Man Utd is the pitch. Just look at that 20,000 space car park! Not even an electric car only car park. All that diesel puffing into the atmosphere. And fans traveling from and to all of Europe to watch this silly game. And meat pies and burgers! I hope the new manager will have an ethical 'no flights' policy to his campaigns.

Nick Clegg: Liberal Democrats
Some say David Moyes won only 52% of his matches. I'd disagree with that figure and say it was more like 99%. There are a lot of scare stories going around and we must be careful not to fall for propaganda. But what is crystal clear is that if the UK left the EU, then all British clubs would be barred from the Europa league, the Champions league and the European cup tournament. its the EUROPEAN Cup! The clue is in the title! So stick with the EU.

Nigel Farage: UKIP
Well who could be surprised. A British manager is sacked and his replacement is going to be a Louis van Gaal or a Jürgen Klopp. A Dutchie or a Hun!
A Goldmember or a Sauerkraut Pickelhaube. Another British job lost to a foreign worker thanks to this ridiculous open door immigration policy.

Leanne Wood: Plaid
Well this is fantastic news. Ryan Giggs, the most briliantest football man in the world has been appointed as temporary coach. I expect that once he knocks the ball on the training ground his total lack of management experience, club leadership or the necessary coaching qualifications will be forgotten and he will be confirmed manager for life.
PS - Send money!

Gordon Brown: Labour
I wish Mr Moyes, a erm..a ..erm...mmmm..m..m a fellow Scot..a...erm.. every success in his new role as mur...manager of Manchester Wednesday and look forward to seeing him at the Emirates stadium performing successfully for many years.
Posted by Bill Quango MP

The similarities are there.

Inherited a title winning team that he couldn't get to play for him.

Anointed as successor without opposition.

Honeymoon period, straight into a run of tough tests, that he didn't meet.

A succession of poor performances{by elections-euro elections} lost part of the faithful. Eventually leading to many calling for him to go.

No really good ideas. just a lot of unsettling and largely unnecessary changes to an established side.

By the time he managed to sign a real quality player, Mandelson-Mata, it was too late and he paid too much.

The opposition, beaten so easily by Blair/Ferguson, really improved their game and strengthened their first team squads, making victory with the old, tired, aging lineup much harder.

And both Moyes and Brown finished 7th.

Which was a very bad result for Brown as he finished 7th out of 3.

"Bugger. He had a job to finish"

If Moyes is Brown to Blair's Ferguson, where does that leave United next season under Miliband?

A few impressive timely wins forgotten amongst the painful mediocrity and lack of clear strategy?

Well, they never played with a full team did they!

Where was the scrum-half, or the fly-half!

Sometimes I think these people should gen up on the laws before they start thinking they're managers!

you can come again

*applause* from the stands for both post and comments.