Time to put a pillow over the Lib Dem voice


Nick Clegg is always saying he wants to get the Liberal voice heard. 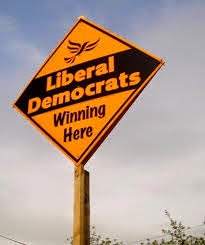 Why?
It doesn't change anything. In fact, if the liberal voices have achieved anything at all in 30 years it is keeping the parties they dislike in power. The Liberals, since the sensible section of the socialists split from Militant Labour have been giving their enemies an easy ride.

In 1983, the high water mark of the SDP they polled almost as many votes as Labour. 25% -28%. But splitting the left wing vote gave the Conservative government a 144 majority and ushered in full blown Thatcherism. Privatisation, tax cuts, EU resistance and council house sales.
Not something that the Liberal voice ad been yelling for.

Then they did it again in 1987 getting 23% and bugger all seats ensuring that the Tories still had a 100+ majority, even after 8 years in power and record unemployment and strike days.

The SDP decidedt they had become too right wing under David Owen, so {after two years of dithering , numerous debates and conference motions over what to call themselves} they became Liberal Democrats.
And there they allowed in the Major government and continued the Conservatives second decade in power. By the time their big break came in 1997, hoping to coalition with Blair, the public were so sick of the tired  Tories, that they voted in Labour in such numbers that the Liberals were not required.

Their next big chance was the Iraq war. Defections cost Labour votes, but by not adding to the Tories, they allowed the 45 minutes to invasion party to carry on as if nothing had happened. And this continued on until the last election where the Liberals were finally needed to form a coalition. - But a coalition with their ideological opposites.

What use is this Liberal voice? It keeps in power those Liberals want out by offering a false alternative.
Liberals know they can't form a government. Not ever. They prevented Labour gaining hardly any ground in the south east or especially the south west where they should have much more representation.
They prevented the conservatives gaining real ground in the mid '00's and kept the war party in government.

If there were no 'protest' party then people would have had to make a real choice from what was actually on offer and not a false choice of some conscience cleansing, to-good-to-be-true, fantasy party.

And now they've even lost the ability to be just the pointless party of protest.

Time to put a sock in the Lib Dem voice.

I've been a member for years but you have to have a split personality as it really is two separate parties. The old liberals have never quite got used to these SPD upstarts. Like Laws they believe in laissez-faire economics and can be quite right wing.

The SPD believe in being inclusive and the state paying - which is the total opposite of some of the Liberal elements.

But what binds this schizophrenic group together is an honestly held belief that they should hold the government to account for it's shift to the left / right (delete according to your views). They believe if they were not there, the world would go to hell in a hand-cart. Also they fear that if they split, they would become even more ineffective.

What has done them in, was going into power and having to account for their actions. Agreements and collegiate decisions don't fit well with saving the world.

They are going to be mighty relieved when they get kicked out and can return to shouting from the outside.

And I think the voters will ensure that in 2015.

On the Money BQ. They have achieved nothing for 30 years and do not evenespouse real Liberal views - i.e. Libertarian.

Thus even their own chosen name is a lie.

I have never got the yellow peril but for the country as a whole they will be no loss. The loons can happily vote green from the sidelines and the other can split to the main parties.

UKIP I fear will eventually suffer the same problem - but maybe it wont take them 30 years - and at least they have the EU policy which is both distinct and wise.

It really began to go wrong when the Greys allowed Gladstone far too much scope to further his ambitions.

I thought it was all constitutional reform and stuff but after that horse bolted I guess it's as Anon 8.06 states - neither of the above but politics for the function of politics. There are worse things, I guess.

We had quite a sizeable Lib party on our council and the way they conducted themselves was bloody rude - it was almost like a state pf permanent pissed off state of mind where even when they were getting what they wanted someone was fucking them over; never got my head round that.

I guess it does set minds to a couple of elections hence, where some EU fudge has occurred and we move to a 2 party state - guess it'll work itself out in the wash.

In opposition the LibDems were able to promote themselves as centre-left or centre-right in different areas depending on what was most advantageous in each constituency. Entering a coalition with Labour or the Conservatives meant choosing to be definitely one thing or the other, and immediately alienating a large section of their potential supporters.

But since the LibDems are really two parties in one they couldn't make a whole-hearted commitment to a coalition with either party without risking a split. In order to appease their internal opposition, the party leadership would have to be difficult and demanding with their coalition partners. This in turn makes them look petulant and unserious to the general public. So the rise and fall of the LibDems can both be explained by the dual nature of the party.

Labour moved centre anyway, without the help of the breakaway moderate socialists in the SDP. Although it could be debated that they saw their voter base shifting to the liberals and so moved onto that more fertile lawn themselves.

The Tories became even righter wing when liberals joined LibDems instead.

No real point to being a party that cannot be in power. Its the devil of politics - reality bites and decisions need making -

In consolation the Greens have made a total hash of their attempt - they'll be very lucky to retain their seat.

CU : trouble for UKIP, as the SDP, is it takes 20 years of consistently high support to achieve a breakthrough. That's twenty years of vote share HIGHER than the main opposition, with few rewards and little hope.
Rosie Barnes anyone?

But in fairness the Liberals had managed to stake a claim. But, as has been said, built on creaking foundations of sand.

- I can feel a post coming on - Why the corn law movement succeeded and the chartists failed and what that tells us about UKIP and the LIberals.

I like the idea - though only you and me may know enough about 200 year old politics for it to have much interest.

Anon2 : thanks for that - looks like a fun post. Shame they are all forced answers. - Soft drug use, I don't much care but its only agree/disagree.

Lots of complaints about how the LD's behave on councils. On our local one they had to call in police to meetings as they outraged so many of the public and did the usual one story in public, one in private.

But in some areas they are strong. look at Eeastleigh. No real hope for UKIp whatever the Libs do.

AndrewZ: precisely. But they needed to iron all that two party in a party crap out a long time ago. Red Ed manages to have some Blairites. Wet Dave has David Davis in his gang. - Ideological opposites.
Yet they manage to have a 'dominant' side that keeps the other in the box most of the time.

Maybe its because both Tory and labour have had their recent 'Civil wars.'

BQ, I suspect that there are two reasons why the LibDems didn't have their civil war long ago. Firstly, their dual identity was advantageous in helping them face both ways to pick up the protest votes - it meant there was always someone in the party who could play the required role with sincerity.

Secondly, the current version of the party was formed as a merger between two struggling parties that couldn't hack it on their own or as an alliance. Therefore many LibDems would remember how the party came into existence and would not want to risk a split that would sent it right back to where they started.

I don't imagine the LibDems will be allowed to fall by the wayside.

They are an entrenched part of the political establishment. Like many MPs who have transgressed are never dropped from the governing clique.

UKIP will never become part of it no matter how many vote for them.

At worst Clegg will be found a cushty sinecure somewhere in the EU - where all the election rejects go.