The Great BBC Question Time Bake Off begins tonight.
These first episodes have a lot of ground to cover and usually the editor adds some random questions from months ago. Presumably so we know they've been paying attention and not just on the sort of long holiday a teacher would envy.

So, the first edition back is the charity shield match. Tonight's winner gets to add that silverware to their Question Time Trophy cabinet.

A bit easier tonight as the momentous events have been quite recent. And the location of the show is a bit of a clue to the BBC's thinking. 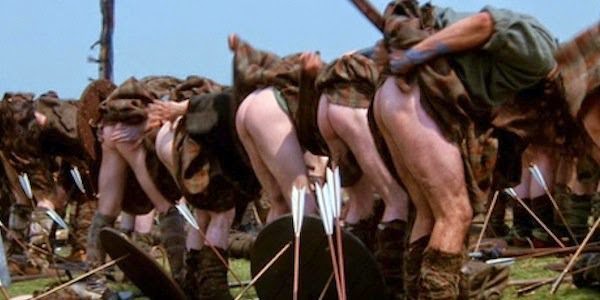 Scoring
1 or 2 points for each correct question asked. Depending on how close to the actual wording.
5 points for guessing the colour/design of  the Dimbleby tie. 2 points for nearest match if no outright winner
1 point for each witty comment/excessive punning/ lampoon/mock/clever theme  that you put into the comments
1 point for the first entrant each week
1 point for random other reasons


Capitalists@Work BBC Question Time competition is proud to support Politicians in Need.
{of votes}.
Sponsored by Benson's Beds. "For a great night in, go to Benson's."
62 Camberwell high street - Sleeping on the job is what we do."

BQ Suspects
- Is Independence now dead for a generation?
-  Should there be a seperate English parliament?
- Has David Cameron renegaded on his unlimited cash for Scotland promise already ?
- Should the UK become involved with the US led mission to attack IS in Iraq?
{And should there be a referendum in pacifist Scotland on this? - And why has such a historically warlike nation, very good at fighting, suddenly all become softy-girly-weeds?}
&
- Just because its the labour conference, NHS cash, hospital, funding crisis, mansion tax, privatisation of healthcare borefest. probably from "on message" Miss Soundbite herself , Emily Thornberry. -Or as she's known in the House - THE REGURGITATOR.

Was the referendum the starter or dessert? Is another referendum on the menu?

English cakes for English bakers? Can constitutional reform be done ad hoc or is there a recipe which must be followed?

Will Ed Miliband's omission of the deficit from his conference loaf mean that his electoral fortunes fail to rise?

Is a tax on houses with big kitchens fair or a slippery slope towards higher taxes for all hardcookingfamilies?

Was Salmond smoked, or will he be bass in the future?

Did Scotland vote the right way?

Should we bomb isis or New York?

Can Cameron ever beat a milliband speech?

is the NHS safe under the tories

(0) blood-in-the-sand
(1) should smartarse politicians stick to a script?
(2) should the voting age now be reduced to 16, after the stunning success of Salmond's attempt at gerrymandering?
(2a) would members of the audience stop throttling each other?
(3) should oldies be denied the vote, after they deprived Salmond of his birthright?
(4) should we ever treat with ISIL / hostage-takers etc etc?

Why didn't Scotland vote for independence? Head over heart?
Will the unprecedented high voter turnout be repeated next year (no). Votes for 11 year olds?
Did Cameron have to agree to keeping the absurd Barnett formula? Panic from one poll out of 60. Should he have resigned instead of Salmond

Time to start booming someone. Should the UK sit this war out! Enough others are involved already. We can be the Germans for once. Just send some social workers.

Is the deficit important ? Or just something that's easily forgotten.

1. Shouldn’t Saudi Arabia*, leader of the Muslim world, be told to sort out its brothers? There again, we don’t want terrorists roaming the world. One bombs (hard guys) and the other (soft guys) talks. The Qur'an needs amending in the way the faithful are told treat non believers.

2. Were the Scots sold down the River Tweed? Och, Cameron did what a man had t’do. Spey a thought for the West Lothian question.

3. Labour. Can we afford a minimum wage of £8 an hour? So how many apprentices at what cost? Zero hours will be no hours. Deficit, what deficit?

4. Will UKIP rule the waves?

5. How can we pursue old DJs and yet so few in Rotherham? Intimidation.

What's the tournament prize going to be, BQ? A piece of Ukraine?

*Ten million women are oppressed in Saudi Arabia; no sport, no driving, not allowed out, not allowed into government offices unless accompanied, forms must be signed for a woman to leave the country, pressurised to have large families and nearly all are financial dependants on their husbands where the courts favour men. Most women have nervous breakdowns after their expensive wedding and first child, lose their confidence and become spoilt. America avoids highlighting this awkward truth.

God, what a horrible panel.

1. Was the indyref a fix by scheming English politicos and monarchy? Are we going to end up with the People's Republic of Glasgow instead?
2. What's the future of British Labour after opposing independence?
3. If ISIS are such a threat to Western Civilisation, why did we let them take over Syria and Iraq before doing anything about it?
4. Oh, go on: why not drop the voting age to 16? (or 14? 10?)

Only 4 questions because of lots of blathering and willy-waving about Scotland and Syria.

Something strange in Syrian sands,
Psycho's slaughter, slobber & show,
crimes brought to you via Youtubes.
Surely Google should silently censor?

School kids sullied, by shitbags*, secretly supported by silent Social Services.
Society cannot support this status-quo,
Swing they should, from string and something sturdy!

Does the panel believe the war against ISIS will be won by air strikes alone?

Q: @AlexSalmond said last week "the campaign continues and the dream shall never die." When will @theSNP accept No result as final?

Q: Should Scottish MPs continue to vote on English issues in Parliament?

Q: If @Ed_Miliband forgets the deficit in a major speech, how can he be trusted to lead the country?

typically lackluster charity shield - too many reserve squad players on the pitch. So a plodding, predictable game.
Highlight was Emily 'on message' Fivebellies saying as the very last line of the show, in a sombre tone,

- We need jobs, housing {sob} for our children, {wipes tear from eye}
and..we must save OUR NHS !

It was met with complete silence - She was very surprised. silly old bat.

ND - 6 {and strangely the Scots audience overwhelmingly thought we should have some sort of diplomacy and treaty with ISIl - very weird.}

Measured - 4 {Saudis - Have been our allies for years. Yet we NEVER criticise them. Not since death of a princess - Channel 4 I think - one for google. Its an issue that George 'dictator's friend' Galloway mentions. And amazingly, he is right.

hopper was a very ugly panel too. Looked like the waiting area for those who just aren't going to get on X factor. - 5

Winner! First ever win! Even with the tiegate gerrymandering which was almost Salmondworthy ;-)

Pretty portion of content. I just stumbled upon your weblog and in accession capital to assert that I acquire in fact enjoyed account your weblog posts. Any way I will be subscribing on your augment or even I achievement you get admission to constantly quickly.
www.zonevalves.co.uk |

Fantastic post however I was wanting to know if you could write a litte more on this subject? I'd be very thankful if you could elaborate a little bit more. Cheers!
http://www.uvirtualtravel.com |

I really think that one of the best articles is this one. It has everything. I needed this information to prove wrong my teacher. I knew this was happening. But my teacher did not agree with me. Now, he'll know I was right! Thank you!
richmondhomevalues.org |

Its really nice to hear that someone is fixing this game! I LOVE all the new ideas