The Eagle has crash landed

This social media thing is amazing.
There was veteran Labour obfuscator, Angela Eagle, sitting happily on the Question Time panel. She knew the 'big question' was coming. She was prepared. She knew she had right on her side and could expect a big round of applause once she'd said her prepared piece.

But it all went horribly wrong for the poor old moo. 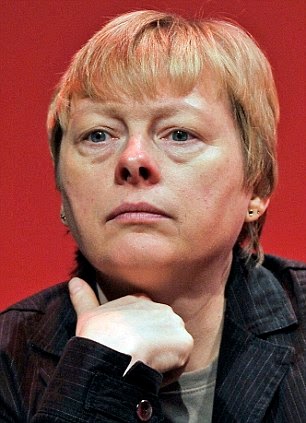 
" Should Lord Freud resign from his post as welfare reform minister following his comments about the disabled?"

Angela Eagle waffled a little and then went in with "I do think he should resign. His comments were offensive. he has caused a great deal of offence to disabled people. His solution to weaken the minimum wage and make disabled people work for less than the minimum wage .. which is the legal minimum..he didn't go out and evangalise about the benefits of disabled people, ..no..he talked about putting their wages down to £2 an hour"

Jeremy Hunt, Isobel Oakshott  and David Dimbleby ALL told her that the government would make up the difference to the minimum wage. So the worker would get the same as anyone else, but the employer, would pay less.

Then, in a very very rare event, the audience, which had been very left leaning, turned on her as well.
Two different, and unrelated, men both attacked the old bird for deliberately misunderstanding what the minister had said. The first man said Freud had expressed himself clumsily. But it was perfectly clear that his intent was to find a solution to how employers can be subsidised to take on severely disabled workers.

When the Eagle tried to imply again that the government was going to pay only £2 an hour because they were evil Tories, this chap was having none of it. And he told her so.  He even told her that she knew she was being deliberately obtuse, as evidenced by the semi smirk on her face as she answered the question.

The next man asked to speak retold the story of how the phrase 'not worth a full wage' had come about and the events surrounding it and explained that it was a poor choice of words. But the minister's intentions and the man who asked the question of him, were both seeking genuine solutions.

When Angela tried to stoke her outrage a final time the audience booed her.
Actually, genuinely booed her.

Her.
Not her opinion. but Herself.
Booed and catcalled her for her faux outrage, pretend offense and her attempt to deliberately misunderstand an event for pure political gain.


That's social media. The audience, used to having a say on blog and media and webpage, were not being fobbed off with a platitude. They wanted to speak and they did.

The Eagle has crash landed.

Irrespective of her discomfort why should the taxpayer pay yet another subsidy?

Why does Tesco get its employees to claim Tax Credits - another subsidy?

What's with the support for subsidies?

it was wonderful - yes it was

I'll bet she feels stitched up: everyone had a knife out for her

Why the chuff did Miliband lead with it at PMQs in the first place - it's, it's just such low grade student guff that it just depresses everyone.

I used to help out at a packaging firm in Watford - all of the employees were disabled and were paid a nominal wage topped up by welfare.

It was a good scheme and the paid supervisors were expert at getting the most from the production line. Some of these people were severely affected.

The cost of providing for disabled people in the workplace should not be underestimated - with manual work it isn't usually to the employer's advantage to employ them so, for the sake of the solvency of the company, government top-up should be there.

But I'm with anonymous above. We subsidise an awful lot in this country - and our tax take is down.

How is this to figure ?

PS, the 'outrage' was entirely manufactured between Labour, BBC and 'charities'. The sort of politicking people are sick of.

Most people don't mind a bit of straight talking as Nigel Farage is proving.

EK - for once I would argue the social good aspects. Disbled people did not choose to be this way - it is not indolence or lack of wit.

This is real social justice, helping society to work by helping the most vulnerable.

Of course companies should get tax benefits for employing disabled people.

That we cannot afford this is due in the main to the mass of middle class welfare tax credits and public sector pension commitments.

The country is not really broke, we have chosen this path.

Anon: Superb point. Clearly a work subsidy should be for disabled workers. or long term unemployed or reforming criminals .. An incentive for an employer to take a risk and and a payment to offset additional costs.
Quite why we are subsidising people to employ people they are going to employ anyway? ..who knows?

Nick; We here at C@W have long been angry at the childishness of the post Thatcher politics.
Since John Major's 'big society' speech used as a stick to beat immoral ministers {some of whom quite liked being beaten} .. Blair's whiter than white ministers found to be as grubby as the previous.

For me the final nail in the outrage politics coffin was Brown being pilloried when he wrote to the mother of a dead soldier. Just for once in the lumpen loonies life, he came out and apologised and appeared genuinely remorseful.It actually did him some good.

Miliband really thought this was a winner. He even rose from his sick bed to give Cameron the news that his ministers were evil Tories.
So glad it semi-backfired.

I pay taxes to provide just this sort of subsidy.
- supporting those who cannot help themselves.

It was the Labour government who closed most of the Remploy factories, remember. The Coalition shut(mostly) or privatised the rest.

Freud and the guy at the conference were having an honest conversation about that boundary where work and therapy meet - there's no doubt that some unfortunates are not capable of ever getting a MW job (unless there's a huge, unprecedented all hands on deck labour shortage - like a war) - yet it's generally agreed that it's good to have something to do, pref. socially useful.

That he had to apologise, on orders or not, shows how debased political conversation is here.

DTP : For Miliband it was gold. The nasty party want to pay disabled people less than the minimum wage {subtext - because they ARE nasty and want to bung their millioniare mates in big oil hardworkingtaxpayers cash}

And it was working very well. Right up until Question Time.

EK: Agree with all you say. We subsidise to redistribute. It makes a £20k worker as well off as a £45k one. Why this should be considered a 'good' thing ??
And I'm sure this is a large part of the Farage/Boris appeal.

People think they answer the question asked..which is only sometimes true.

CU:Can only agree with all you say.

Andrew: Me too..Take my tax and give it to the genuinely disabled. The bloke with MS down the road who has full time carers , as he cannot move below the neck, yet still works..give him the many many thousands that this costs..I'm fine with it.

But the bloke in the very next flat, with two sons, none of whom work, and who I've never known to work, not in ten years,..why are we paying them at all ?

I wish one of the political parties would have the guts to say they will abolish the minimum wage. It's just another consequence of socialist fantasy world and the effect of over-paying the lower paid is disastrous for everyone.

We pretty much now have pure communism in this country, for the broad mass of the public at least, thanks to the Tax Credit system. It no longer matters how much you earn by your own efforts, unless you can earn so much as to escape the system, as the Tax Credit system will provide for your 'needs'. Thus we have income according to need, not according to ability, and that now extends to probably 80%+ of the public. Its been shown that identical families with identical 'needs' get the same post tax post Tax credit income, whatever the earned income is to start with. So why work harder, or get promoted, or improve your skills, if there is not discernible benefit from so doing? In fact do less, and get the same income!

We really are f*cked.

Jim - you hit the nail on the head.

The one thing you never hear when people's lack of incomes are discussed is why they don't have the skills or have undertaken training , education to better their skills in order to get a better role.

It's lazy and in the modern globalised world completely unsustainable.

But then again I'm obviously an evil bastard for letting logic or facts contribute to a conversation or thought process.

Quite right. Subsidising jobs for the physically and intellectually disabled would be a good use of my taxes, for once.


"helping society to work by helping the most vulnerable": that's nothing to do with socialist dogma. In fact it's the very opposite: it's to do with kindness, sympathy, and compassion.

Never mind. I'm starting to welcome the idea of Labour getting in. After all, they have promised to "balance the books".

I was suggested this blog by my cousin. I am not sure whether this post is written by him as no one else know such detailed about my difficulty. You are wonderful! Thanks!
www.oceanictuna.co.uk |

It's very easy to find out any topic on net as compared to textbooks, as I found this article at this website.
http://www.paradeeptravel.com |

I have not much time to visit many websites. But today I found this site accidently. I explored much information which is useful to my life. Thanks!
traveltims.org |

Would gladly pay for this mod is there was voice-acting too, thats half the experience, would u ever watch a movie if u couldn’t hear what people say?
dsweddingvideos |