The rise of the SNP - alternative history 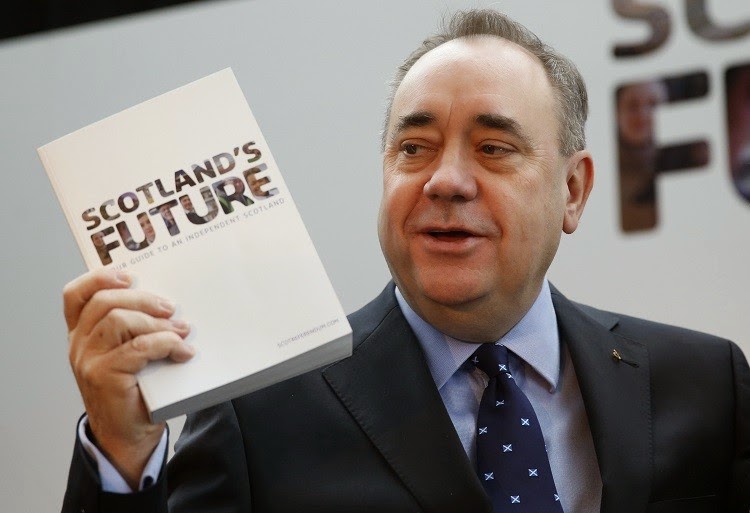 Alex Salmond was on BBc's This Week.
He said that the incredible deal offered by the Smith Commission, something far in excess of what was on the table before the referendum began, is a sham document that robs Scotland of its right. The report is a betrayal of what the Scottish voters were 'promised' by Gordon Brown and the whole thing has been a massive betrayal by the ruling London parties.

He could provide no evidence of these additional promises. They aren't reported in any news paper. Or recorded in any speech. But apparently Brown promised them. Even though Brown hasn't been PM for quite a few years, he had the power and did promise Scotland full tax raising powers.

Salmond sounded ever more extreme and unpleasant. Promising the Scots things that the UK can never deliver, and then complaining that when they won't agree to his demands, they are reneging on their promises.

It may all have sounded a little familiar to history students.

2014 - SNP surrenders to the British  government after failure to achieve a YES vote.
After years of  political warfare and many, many millions of pounds wasted the result is a stalemate.
Disillusion with traditional political parties rampant.
The defeated SNP Tartan army is allowed to march back to their homes in good order. The victorious allies decide against occupation of the homeland.
The myth of 'the Westminster stab in the back' is born.

2015 - Alex Salmond discharged from the Tartan Army . Formation of the Scottish FraeKorps from SNP & ex-Labour voters.

2015 - Treaty of AuldLangSyne. Harsh terms are imposed upon the Scots. They have to incorporate the 5 a day fruit regime and minimum pricing for alcohol into their culture.

2018 - SNP take up seats in the parliament. English students forced to pay for education that is free for non-English.

2020 - Socialists Nationalists and the Green Party take seats from the Communist-Red-Eds. Salmond stirs up his supporters with fiery rhetoric and promises. He demands more powers of taxation and a Scots army and airforce that was [always} forbidden under the treaty of AuldLangSyne.  Running street battles, fires, looting and extreme violence break out in Glasgow and Dundee..Which is quite normal behaviour.

2021 - Holyrood Parliament burns down under mysterious circumstances. Civil unrest in the major cities. And  Aberdeen. Sturgeon demands emergency powers. "English foreign saboteurs' blamed for fire. Oppression of the English, something that has been on the rise since 1968, increased.
New laws banning 'Australian people' from owning newspapers or having involvement in the media passed. Murdoch press forced to sell to SNP supporting moguls.

2022- Night of the deep fries - Green party leaders eliminated under Sturgeon's orders. The Greenshirts are incorporated into the SNP.

2024 - English banned from all public sector jobs in Scotland. Which is basically all jobs in Scotland.
English forbidden to marry Celtic citizens or date people with ginger hair. Sturgeon demands Anchluss with Isle of Man.

2025 - Pact of Steel mills announced with Wales. England calls up all 200 of its reservists. Scotland demands control of Northern Ireland and claims Celtic citizens are being mistreated in that country. Sturgeon says war will follow if demands not met.

David Cameron flies to Melrose for talks with Sturgeon. He agrees to allow occupation of the Irish border region and Scottish control of the Northern Ireland subsidy in return for a time extension on the naval base at Faslane .
He returns to Croydon claiming "Lease in our time."
Adolfine Sturgeon posts Cameron back his umbrella that he had left behind "I thought you might want this. It folds up very quickly."


2026 - Scotland occupies Northern Ireland. England arranges to lease St Nazaire so as to have somewhere to base its aircraft-less carriers.
Cameron says, no ifs no buts,Sturgeon will not demand anything more if we just accept this final humiliation.

2027 - Kristal-Meth Night . Thousands of shop windows smashed, heavy street fighting and attacks on English owned shops and businesses. The violence erupted after a controversial penalty decision at Wembley in the England-Scotland Euro Qualifier game saw England win 3-2. English taxpayers made to pay for all the damage - so no real change.
SNP passes the Helensburgh laws. All English people must wear a yellow flag of St George and drive a white van. English places of worship, Marks & Spencers and John Lewis are forced to close.

2028 - to the astonishment of the world an SNP-UKIP pact is announced. These two ideologically opposite parties form an alliance.

He returns to Croydon claiming "Lease in our time"

perpetuation of myth there, Mr Q

it is commonly thought that Chamberlain made his declaration at Croydon Airport. In fact, it was Heston Aerodrome, Middlesex

Thanks for that - absolutely hilarious. Especially the line about Sturgeon ceasing bleaching her moustache. Ouch! :-)

All it needs is an addition about the "Income Tax Border Reivers".

The more asymmetric and unbalanced Devolution becomes, the sooner it will finally spin out of control with the UK breaking up and the English ceasing to be discriminated against third-class citizens.

I don't think it will take until 2028. Apart from that, all seem quite strangely plausible...

I find it interesting the collapse of the oil price seems to have passed the SNP by. The meeja too, for that matter.


We are all so full of the expectation that things will get worse at the moment, that they probably wont.

Just wait until the Sun / Guardian (fill in your choice of comic) says things are better and not many laugh at them.

Only then will Salmond rise.

Imposition of 'Treaty of Auld Lang Syne' and five fruit and veg a day meant war was inevitable.

Surely the Fry corps was formed rather than frae corps.

ND: Of course.. Historically after Chamberlain's announcement of ..in our time.. the world breathed a collective sigh of relief. Only Winston grumbled that it was a lousy deal for the Czechs.
The image of appeasement, old man in ancient attire holding a piece of paper, is now so strong,{Guido using it today on order-order} its forgotten that at the time it was greeted as a triumph.
People bought each other umbrellas as gifts and shop windows had umbrellas in them .. as a symbol of war averted by a great statesman.

Wildgoose.: devolution looks increasingly like separation to me.
The Scots seem dissatisfied with the deal they struck. As do the English.
Not a happy state of affairs.

CU: Yes. 10 years seems to me to be about the time limit the cobbled together devo-max can last. Less if its ridden particularly hard.

SebW: Very, very good point. If Russia is finding itself going bust, what chance Independent Scotland with its single resource economy?
The YES'ers may have dodged a very high velocity bullet.

Andrew: Will Salmond come back again? I would lay money he will.

David Allen : i think you may be fright. It was the FryKorps. Which was eventually absorbed into the bodyguard. With that sinister Yellow and Black uniform with St Andrew's crooked cross armbands and the SS {Sturgeon-Salmond} runes on the collar.

Some events have been omitted due to space. The keen student will spot the that the burning of 'non-Scottish mythical fantasy history' books is missing.
Such as the Harry Potters.

And the formation of the Sturgeon Youth. With a corresponding voting age lowered to nine.

But you are quite correct. Most historians agree that the fruit and veg was just vindictive. It would never be swallowed by the Scottish people!

You are an incorrigible optimist.

Very droll!
A couple of other interesting dates:
2017 Christopher McIsherwood writes Hogmanay - a romance set in the Sturgeon Republic.

2023 Hamish McHadrian commissioned to build a wall to keep out roaming bands of English beggars impoverished by the lack of access to Scottish Oil.