I'm a Barbie girl, in a barbie world .. its fantastic 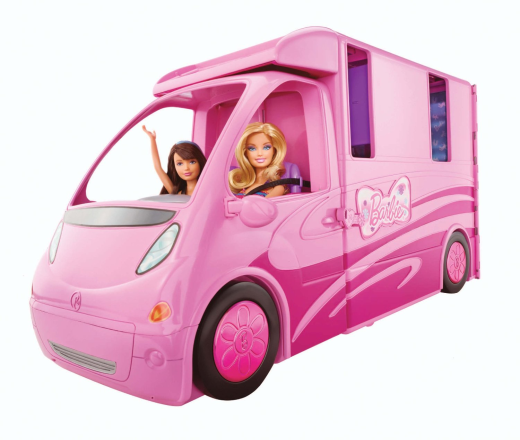 Have you ever been sat in a really boring meeting in a warm room? And the chair is droning on about something that you have no interest in and only peripheral responsibility for?
You see colleagues with glazed eyes reflected in the PowerPoint. Some staring at the ceiling. Some sneaking a look at their phone. ..And so you drift off and stop paying any attention at all.

You start pen nib dotting onto a piece of paper. Just irregular ink points onto the pad. Then some random doodling  A few strokes up and back as the monotonous voice rambles on.
And you suddenly notice that that doodle has a shape! Its actually pretty good

So you draw some more. Add a kennel and some trees and something that could be a postbox..or R2D2 .. or an old milk churn?...
Then your concentration is disturbed and you vaguely hear the sound of someone saying ..

"What do you think of this idea, Quango ?"

And you realise that the meeting has moved onto your area but you have no idea how long ago or what has been being discussed.

And your only clue is the PowerPoint on the last slide. Something about,

Could be an NHS gynecology health clinic proposal? Or a lesbian vote initiative? Or single mums parents and teachers associations...It could be bloody anything its so vacuous. ..

So you just stick with your first response and say

"No..I really think its totally fine as it is."

That must be how this bus idea got signed off.

Labour's idea of painting a van clitoral pink and sending it around the country packed full of their  single issue feminist politicians is astonishing. Its such a poor idea on so many levels.

Harriett Harman, deputy Labour party leader,  says she will be visiting constituencies to engage with women voters and find out what it is they want from a Labour government. She doesn't say why Labour have only just now, 1000 days AFTER they decided to write a new manifesto for a new party, decided to ask women voters what they want.

She does say the van is painted pink , because it will 'Stand out'.
She doesn't add 'Like an Ann Summers Rabbit in carry on luggage"

She doesn't mention how Labour square this when they campaigned for gender neutral toys only a few weeks ago. Specifically saying 'no to pink!"

Its unclear why Labour want their team of top women driving around 70 constituencies , which will take perhaps three weeks? A month? out of the remaining 85 days of the election cycle.

Its uncertain why even though the policy wonks at Labour HQ reported focus group data that women are naturally more socialist than men, but are less likely to vote; that no one thought this particular idea of patronising, identity politics a terrible idea.

Or why anyone at HQ thought that in the digital age, driving around in a pink minibus like Molly Maids or Sheila's Wheels, was somehow going to gain favourable media coverage and engage the target audience better than using Facebook.

The only plausible explanation is the one at the start.

Unless that minivan is actually  Labour's B-Ark and it is really a cunning plan to send their useless third of ultra feminist cabinet  lefties off on a pointless mission to get rid of them until May.
Posted by Bill Quango MP

hahah, your turn to beat me, Bill

as an object of derision, it works on so many levels

so its a van ! when all the wimmin tumble out, onlookers will wonder if they had any seats in there? or are they just a consignment, a job lot?

or the squealing girlies on a hen nite, all getting out of the pink stretch-limo and straightening themselves and looking around blinking and are we there?

(and have they got one of those drinks cabinets in the back?)

who'll drive it ??? one of those butch unionised women bus drivers who still have the balls to clip misbehaved children round the ear ? or - - a man? in livery ?? or with a builder's arse-crack?

because it's a VAN, a bloody great VAN

because they can't afford a Proper Bus, a luxury one with a bit of class

I bet we don't see much of this again

I had a tear in my eye laughing at that - so true. and only 10am in the morning!

I think that inside Labour HQ are loads of fresh-faced advisors ("interns") who have given up trying to actually get Ed elected, so have resorted to a game similar to that played by journalists. You know, like see if I can get this particular word past the editor, except with campaign ideas. One of these activists must have once been forced to watch Ed Miliband eating, so proposed the bacon sandwich photocall.

Ed once complained that he was being "managed" to present a more media-friendly image. Perhaps at that stage he started just taking advice without thinking too hard about it?

Reminds me of the cones hotline.

I liked John Major but the best of us sometimes come out completely teapot ideas.

Somehow, unlike JM I doubt history will be kind to Milliband, you already get the sense no-one wants to think about him anymore (which happened at the fag-end ofthe JM govt).

Shame they forgot the eyelashes on the headlights. That would have made my happiness complete.

And remember, what goes on tour, stays on tour.

Hattie & Co really are the gift that keeps giving aren't they ?

I'm sure this happened under Gordon the Moron. I think he was so dozy and so obviously going to lose, his advisers started having a laugh.

Remember the trouser leg in the sock? "Yes sir, you look just fine." they must have told him.

Same here. "Ed will think it's a great idea for the girls and Hardbitch will have a fit! Go for it!"

Thanks Bill
Made my day
BE
Has to be Bitches Bandwagon

Bumper sticker
If this Van's a rockin...Shield your eyes.

Dave Morris
Never a truer word spoken "Hattie & Co really are the gift that keeps giving aren't they ?"
I've just done a search on "Women touching women" so this will definitely be my last post.

I've heard Labour are starting up a leftist women's newspaper too - The Rag. A monthly issue.

Maybe even The Red Rag !

what would we do without you ?

HAHA! I would love this van. Maybe it is showing a slightly less socialist side of Labour? Like it used to be bright Marxist red, but it got left out in the sun a little too long... just like too many politicians these days.

That said, I'd love to drive around in a pink van, as long as it is a hybrid. I can see world domination in rose. After all, it worked for Reece Witherspoon in Legally Blonde!