Greenist Fantasy - only in Wales and the minds of Lib Dems 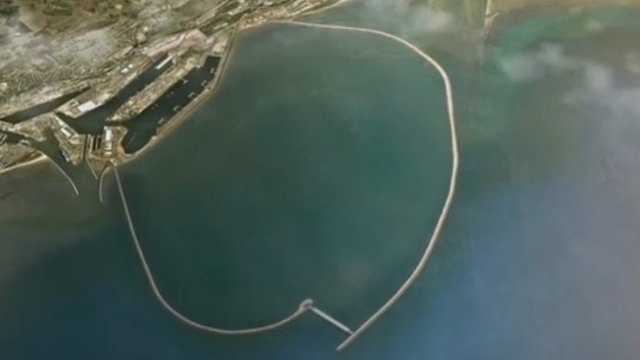 The news that the Tidal Lagoon Power have got Ed Davey, Environment Secretary for two more months, excited about plans that have been around since the 1960's should not really be news, but the BBC have decreed so there we are.

The interesting part is in their plans are, by Greenwash standards, actually costed. The key aspect is that they think a 2 mile long lagoon built in Swansea Bay will only need a £168p/MWh subsidy.

Let's compare that to the totally unaffordable and expensive proposed new nuclear plant. The one we hate the Government for because they caved in and agreed to a £90/MWh subsidy. Oh dear, oh dear indeed.

Of course for Green power fantasists that fact that these things are not economic does not matter. The subisdy comes from you, the bill payer after all and they don't expect to ask you just ratchet up your bills by say, er, 50% and have it all stamped and agreed by the Government. Of course, Tidal power is probably worse than wind power as it is only available 4 times a day for an hour - not of much use to a 24hr power requirement is it?

At a time when the fall in Oil Prices has made even Fracking (er, no subsidy here) look like it will be too expensive, then this floating of this 'idea' to try and shore up the Lib Dem vote in Wales is pure nonsense-on-stilts.

Moreover, it is not even a new idea, tidal power and the Severn barrage have been talked about by the ill-informed since the 1960's. perhaps earlier. At every stage the costs are looked at it becomes so astronomical as to be completely prohibitive - and that is before another bunch of decry the impact on the sea and the creatures who live there.

I so hope for Ed Davey to lose his seat in the General Election and the Country to be rid of such ludicrous people in its crucial Energy Department.
Posted by CityUnslicker

Would it really be missed if the whole sorry edifice was scrapped and power companies just allowed to provide a reliable product as cheaply as possible?

can we not encourage Peter 'Severn Bore' Hain to join in with this nonsense and sink with both into the Bristol Channel?

My immediate reaction on seeing this was "not this bollocks again". I must have seen variants of this stupid scheme proposed at least 8 times in my life. What does it take to make innumerate PPE bullshitters understand the numbers don't add up?

My bristol boating lake is worth every penny of your money to me :)

More seriously, it looks like the DECC is counting on offshore wind

Of the 27 contracts awarded, the majority has been awarded to the more established renewable technologies such as onshore wind farms (15 projects) and solar developments (5 projects). Yet, based on this CfD allocation award, the technology which the Government will be relying on to provide renewable electricity in the years to come is primarily offshore wind (as shown in the diagram below). The majority (58%) of the MW expected to be installed will be offshore wind technologies, followed by onshore wind.

Which makes sense as it upsets less people, never mind the cost

Make the sheepshaggers pay for it from their NHS budget.

Its a great idea but the design is wrong. The walls of the lagoon have to be 100m tall if it is to match the MW output of Dinorwig further up.

I think a lot more Tories are going to lose their seats in the election, not just Ed Davey.

The polls are wrong. What I read on blogs and in response to online news articles is real life, not just Ukip trolling.

There is not one person in my own circle (working class Conservative) that says they intend to vote Tory.

we certainly shan't say you didn't tell us, Kev

Andrew in their chart they seemed to have missed a couple of other hitherto untapped sources, Fairy farts and Dragons breath. When they come on line we should be laughing.
Those offshore wind farms will pay for themselves in no time. You can just see all the politicians falling over themselves to stand next to the giant cable from the sea (in an area of outstanding beauty), bringing clean green continuous energy to our shores.
But if you follow the cable back, it bypasses those hundreds of high maintenance, German engineered, bird killers and crosses central Europe to a 5w shale gas generator in Warsaw.
Meanwhile on the other side of the channel our EU counterparts are popping Champaign and saying " they paid for construction, they will be paying for the maintenance and guess....seriously guess, how much the Insel Affen will be paying for the price per unit.

El Kevo
Sorry mate but your mixing with the wrong (read right) people. As I've stated before the internet drifts people to like minded viewpoints and extremism. I like this site because it has similar views to my own but still we have open debate on points we disagree. Try putting a logical argument on mums net or a Greenpeace blog site and see how far you get. Have you spoken to a student lately or a die hard labour supporter.
PS I'd love to agree with you but the numbers just aren't on our side(and who's to say the whole thing isn't fixed. Who guards the guards)
Elbow "the fix" http://youtu.be/-ITMRHJnaJY
must be one of the best lyrically composed songs of all time but unfortunately always reminds me of eu politicians

I don't think that's true. Imagine a Severn barrage style of dam and assume it's high tide. Either side of the dam the water is at its peak. Then, as the level "outside" drops, you let water out through the dam to drive the turbines. As long as the water level "inside" is higher than "outside" then the turbines run. At high and low tide there will be a period of inactivity, although I suspect even that could be avoided with some additional holding pools.

Reminds me of a mate of mine, had a part-share in a greyhound

every few months the 'phone would ring and a husky cockney voice would say:

Its in their business plan. The tide comes in and out twice a day, you only get 4 good shots at passing the water through. to store the extra water the whol thing would have to be a lot higher etc.

Its just completely uneconomic from its conception. Nice idea, shame about the real world.

My comment was "people don't want to vote Tory" I didn't mention UKIP, just to be clear.

A Tory MP tells me that the Tories have twice has many votes as UKIP. (Adjust this ratio whichever way you will)

But hold on a minute. UKIP voters didn't come from nowhere, did they ?

Most of them are ex Tory voters but many are from Labour too. We're talking who loses least in this election rather than who wins.

I can't bear it anymore and have got a bit to obsessive about it all. I must be boring if I'm bored with me ! I've deleted my blog as it's all rather unhealthy.

I've acquired an old sailing boat. I'm going to do it up and spend my time on it.

Will pop in as and when.

rarely if ever looked at your blog,
can understand your feelings about it.

there is a certain vicarious pleasure associated with someone else sweating over an old boat.

"It took almost 20 years for the La Rance to pay for itself." http://en.wikipedia.org/wiki/Rance_Tidal_Power_Station

That's roughly true for underwater turbines, but not for tidal storage schemes like Tidal Lagoon or a Barrage. Both those have some flexibility over when and for how long they generate for - most importantly on many days they can delay generation a while into high-demand periods (eg 4pm-6pm) offering the best prices, at some reduction of MWe generated. Tidal is still pretty damn expensive though.

yeah, I read that too - and what's more I didn't believe it

this is France we are talking about!

Kev
So your going for "that sheep called dignity" (ruined a good friends favourite song with that comment, he can't listen to it anymore without thinking of some old guy spending every spare minute going off to visit a sheep :-)
Don't beat yourself up mate. I know it can be depressing arguing the logic before swine. Take a break and if ye fancy a night of fun on the tinternet, have a rip into some of the leftie blogs. Just do it with humour. Enjoyed the website by the way.

"It took almost 20 years for the La Rance to pay for itself." http://en.wikipedia.org/wiki/Rance_Tidal_Power_Station "

So what if it took 20 years to pay for itself, if it has a design life of a hundred?

I don't understand where the £168p/MWh subsidy comes from, and is this every year, does it go up.

If we look at 50 year timescales, is it actually that bad.

Or does it just get worse?