Snooker & the Problem of Other Minds 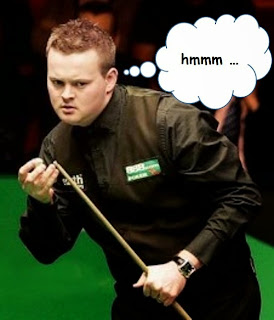 Following on from the notion that hour upon hour of televised snooker commentary offers near-laboratory conditions for empirical observations, I pass effortlessly to that classic philosophical topic, the Problem of Other Minds.

The brilliant, inspirational and much-lamented young philosopher Gareth Evans (well, he died young) used to keep a collection of cuttings that he saw as offering empirical insights into the way that philosophical problems are addressed in ordinary discourse.  For example, he had a whole section on references to the Loch Ness Monster, as input to how the ordinary person addresses issues relating to existence, poor Nessie being an ontologically-challenged beastie.

In this spirit of empirical enquiry (as good capitalists should) I offer snooker commentaries, which are chock-full of remarks such as:
And so it goes on (and on, and on).  What we are hearing is a steady stream of confident judgements about what is "going through the mind" of the player, admittedly punctuated by the occasional:
In other words, the commentators are totally unabashed by any deemed 'problem' of assessing the thoughts of another, and are getting right on with it, non-stop - and with signal success, as may readily be judged by the frequency with which their assessments are spot-on, notwithstanding the odd fail we've acknowledged (which is exactly the true meaning of 'the exception that proves the rule').

How do they do this?  The 'ordinary' answers one would give will include:
The matter of competent commentators usually being right, by the rigorous standard of what the player actually then does, relative to their assessment, is material and perhaps fundamental to the 'ordinary' way of analysing the situation.  This ought to be an extremely important input to 'non-ordinary' / academic deliberations on the Other Minds thing.  It is of course immensely helpful that in these cases there will almost always be a salient action immediately following the player's thought-process and the commentators' articulated assessment thereof.

Which is why I think of the whole set-up as tantamount to 'laboratory' conditions: and with endless examples of slightly differing examples to observe!  Wonderful stuff: what would Descartes or Locke have made of it all?  (Only write on one side of the paper at a time ...)

"...with signal success, ... notwithstanding the odd fail ... (which is exactly the true meaning of 'the exception that proves the rule)."

Proof of the rule (in the sense of a gun barrel proof test) here showing that it blows up for exceptional cases.

I don't think you can just say what you're thinking, or what you think they're thinking, if you're being broadcast on TV.

And snooker is one of the more predictable sports. There's not much in the way of tactics involved really. Simply leaving 8 or 9 foot between cue ball and reds isn't 'safe' in a professional tournament. They all play to pot all the balls.

So when two top notch players, both from dodgy families/backgrounds, keep flumping easy shots it's not polite to question their motives, and you wouldn't keep a TV job if you did, and might even end up in court.

Snooker is life reduced to a two dimensional plane - therefore the complexity of a decision is reduced by at least 30% and so easier to predict intent.

Or am I just talking bollocks ?

Well you tell me.

PS, You forget the average male thinks about sex once a minute too. The commentator never says he's thinking "Nice tits on that bird in the front row."

yeah but the average male doesn't reach the finals of the World Championship after n years of 8-hours-a-day practice, you're talking bollocks! (+:

seriously, the reduced complexity is another aspect of the 'laboratory conditions', as I see it: easier to predict (and monitor the predictions etc etc) but the same inferential processes being used (I suggest) as in more complex, 3-D situations like a bar-room brawl ...

how do you martial-arts chaps figure out the other guy, Kev?

DJK - have you seen the collection of burst gun barrels at Defence College of Management and Technology Shrivenham?

there are some beauties - very artistic effects, sometimes

Hour long frame and counting, 2 balls on the table, Murphy needs a snooker and won't concede.

Virgo was too polite to suggest what might have been through is head.

ND: I haven't seen the Shrivenham collection of burst barrels. Are they an ex-Woolwich collection?

DJK - don't know, I suppose it is entirely likely they might have come from the drop-shorts initially

there are 2 that really stick in the mind: one (a substantial medium gun, 3.7" from memory) where the muzzle-end has split so as to form a palm-tree effect

Nick - How do we martial arts chaps figure out the other guys ???

Interestingly, during the midsession interval of the final session on Monday (oh dear, have I just outed myself as a snooker fan?), the BBC coverage played a clip focusing on the current commentators, what it's like to come back to Sheffield as a commentator rather than a player, how to make the transition from player to commentator, and one thing Stephen Hendry said caught my attention; he commented that he was surprised to find he's actually quite bad at guessing which shot a player is going to take, and as a result he's started restricting his comments to statements after the shot has been made. So it's not as easy as you might think, to intuit the other person's mind!

welcome, Sara: interesting, but I'd say he's doing himself a disfavour, he's pretty good (and will doubtless get better)

there's something inherent, but it can generally be improved