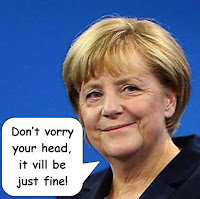 Frau Merkel, we learn, has made herself the hero of the greens by getting the G7 to agree to "decarbonise the global economy in the course of this century".  That's Angela Merkel, who has presided over a national energy policy which has seen German CO2 emissions rise (sic) for three straight years, haha.  And her with a doctorate in quantum chemistry too.

85 years - that's quite a kick she's given that can.  Sounds about the right timeframe to move the whole thing into science fiction territory.   I have always reckoned that fifty years from now the issue will have gone away anyhow: a combination of natural population-peaking and the kind of unforseeable technology-breakthrough that can't be predicted exactly, but always happens.  Given, of course, that there is absolutely no shortage of energy on the planet.  Solar PV is an obvious candidate, but maybe electricity storage, or both, who knows?  (Thorium-heads to the comments column, please form an orderly queue.)  There's no shortage of people working on these things, night and day: as they say in academia: if you come up with a viable means of bulk electricity storage, you can name your university after yourself.

In principle, the G7 country most upset by the Merkel manifesto should be China but hey, words are cheap and what do they care?   CO2 is irrelevant to them: they are going to choke themselves to death long before the GW gets them.  Canada and Japan are said to be the countries looking uncomfortably at their feet, but then again, 85 years ...   Oh well, on to Paris for the can-kicking world championship.

Meanwhile: let's see her give that pesky Greek can a hoof.  Big boots needed, though, to avoid a painfully stubbed toe.

Email ThisBlogThis!Share to TwitterShare to FacebookShare to Pinterest
Labels: Merkel, Politicians at work

Which isn't to say we shouldn't have a serious national project on it, since in theory it should work.

there is an infrastruture investment worth doing. More than HS3 etc. With free leccy it would be mglev's everywhere anyway.

My bet is still that fusion will come good, certainly within 85 years.

I always rated the old Saudi Quote " the stone age did not end becuase we ran out of stones and the oil age will nto end because we run out of oil". wise, and optimisitc, words.

Well the solar plane that didn't really get very far is a cross between science fiction and Greek mythology. Where's Mr Tesla when you need him. I bet the next ground breaking invention's gonna be created by Nigel, in his shed, with his inexhaustable thirst for Somerset cider. I hope so....

Solar plane.
Limping around the planet. Hopping from safe rock to safe rock.

Back in the 1920s aircraft did this. Flew from rock to rock. The challenge was the Atlantic. Or the Pacific.And post Lindbergh it was all sorted out. By the late 1940s aircraft were on the cusp of regular, daily transatlantic flights.
The beautiful Focke Wulf 200 Condor flew Berlin to New York and would have become a regular flight, albeit a dangerous one.

At the time, the air race was big news. people loved it. It was a staple of the newspapers. But some said "why do we need air travel at all? An ocean liner can carry thousands of people Europe to USA in a matter of days. A plane can carry two people, at a greater cost, in only a marginally faster time and in significantly greater discomfort and danger....Forget air travel.."

And many,many of the early air pioneers did die.
But air travel is here.

So .. the daft and fragile looking solar plane. An invention to solve a problem we don't have.

or the very beginnings of the next era in transportation?

From an engineering point of view it is a quite fantastical waste of time. You are limited by the amount of solar insolation which (IIRC, off the top of my head, might well be a bit wrong) is only about 1kw/m2 at best, and often a lot less. When you think how much energy is required to lift a commercially useful aircraft and shift passengers and freight around it simply is not viable, no matter how efficient the solar cells.

It's clever and cool and makes irrational greens happy, and that's about it.

Early aircraft suffered from having a power plant that produced only just enough power to lift the airframe and the engine.
The trick to airspeed and endurance was having a lighter, more powerful engine.
Then lighter more durable airframe.
Jet propulsion was the real key, power to weight overcoming all obstacles.

The solar plane is a step back to the start of the 20th century.
Lightest possible airframe because the power produced is tiny. It's an invention unlikely to go anywhere. Unless solar cells can be made thousands of times more efficient

There is an excellent page on this at

Try sliding the buttons along to change the day of the year / latitude.

Its 12kw/m2 per day in London in midsummer.