China Continues to Puzzle and Amaze

President Xi, it is said, has placed political control above - well, above all else.  Which makes the access granted to the world's media for reporting on the ghastly Tianjin explosions all the more remarkable.  And that's notwithstanding this rider from the Beeb:


Authorities in China have over the past 24 hours silenced social media users who have criticised the coverage of the Tianjin explosions. Posts condemning "disgraceful" local TV coverage of the two blasts on 12 August have been removed from Sina Weibo, China's Twitter-like micro-blogging platform, as have posts suggesting that local authorities restricted international media reporting on the incident. 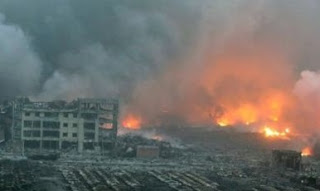 (Pretty odd from an organisation which - commendably, but obviously without much let or hindrance - managed to cover the event comprehensively.)

I go back to my puzzlement over the MH370 affair.  In a country and system where 'face' is so important, why were the distraught Chinese relatives allowed to emote in public, in such a raw fashion?  It would never happen in, say, Japan etc etc - we discussed it all back then.

There are aspects of China I just can't read.  Having thought the '08 Olympics would let the cat irreversably out of the bag (wrong), I find myself wondering again: is Xi really in control?   Is he so much in control, he doesn't mind (from a position of strength) western media blanket-covering his industrial disasters?  Does he just think he is in control to that extent?   ...

I presumed the MH370 relatives were allowed to emote as it was an external issue. If it had been a Chinese plane Im sure they would handled it diferently.

There's not much to deny of an accident or natural disaster. Maybe we aren't seeing protests or other reactions?

How could you 'cover up' a massive explosion in this day and age?

If he succeeds in having the world suppose that only 50 died, then he is in control.

Blue - An accident of the sort that couldn't really happen in the west now.

From an ethical point of view, not only have we outsourced our carbon emissions (though we still consume them) we have outsourced our responsibilities towards safety standards for workers and surrounding communities.

But the products are cheap - though not if you include the taxes for benefits we pay people to stay at home NOT to produce them. And certainly not cheap if you include the fact that our welfare system begets an exponentially growing society of welfare dependents.

Electro-Kevin said...
This comment has been removed by the author.
3:29 pm

Stephen L - How could you even HAVE an explosion of that size in this day and age ? In Britain such a site was kept well away from communities and no-one was injured. (Buncefield)

The West's proxy slave labour market. To keep our darling chavs in trainers and stripey jogging bottoms on Xboxes so they don't riot - because there is no work ethic and the establishment doesn't really want them to work. They don't want the education/training system to work either.

Incidentally the BBC showed a documentary on Chinese style (old British in fact) teaching in a modern British school. It makes very depressing viewing. The Chinese teachers think like I do.

The British teachers sneer at their methods but education results is what should count - not whether the teachers are best mates with the kids.

If you want to totally defeat any country then don't go to war with them - just persuade them that the comprehensive education system is a good thing.

(My boy got 4 As in his A/S levels yesterday. He does absolutely NO study at home)

I got an A* for the model of a battering ram and palisade that I made for my daughter's DT.

what about a trebuchet ?!

(that, and a trip to Istanbul, on the slightest of pretexts)

Sorry. Wasn't bragging about my lad. Just stating that I still don't think our exams have been adjusted from grade inflation.

the lad done well, Kev - he can only play the team in front of him

EK, it is a good thing! Maybe he is one of those enviable types who breezes through and gets what he wants :-)

Aye - He did do well. I bought him some flash sunglasses for his dinghy sailing as a reward.

Seriously though. He did fuck all. FUCK ALL.

13 years ago I passed an A level in law after only five days of study with a cramming book from WHS.

The fact that no one was injured or killed at Buncefield was sheer bloody luck. There are thousands of people who live and work within 500 yards of that explosion (as I did at the time). If it had happened on mid-day during the week rather than 7am on a sunday there would have been hundreds injured at the least. The blast wave wrecked our offices & laboratories and believe me, I mean WRECKED. It took 2 weeks to clear up our site alone. All because of a shoddy gasket and a switch failing.

As for China, anyone who has spent time there can tell you the whole edifice is on very shaky foundations. You believe official stats at your peril. Everything looks modern and competent, but it just... isn't. People do routine work very well, but when something goes wrong unthinking panic sets in and weird things happen. Chinese fire drill, as the Yanks call it. Everyone goes bananas, runs round the building several times knocking things over, bumping into things and each other, and then goes back to their desk and carries on as though nothing happened. They will also tell you with a straight face nothing did happen, and appear to believe it, too.

The funny thing about China when you live there is how free it is. You can do pretty much what you like; they don't have all the petty regulations we do. People smoke and shit wherever they feel like and no-one bats an eyelid. But the minute you express any political opinion, boom, you're double fucked p.d.q. I daresay everyone has seen the photo of an electrician in China fixing a light fixture above a swimming pool with his metal ladder in the water and everyone swimming around him with the current live? Well, that sort of shit goes on everywhere, all the time. It's a funny old place. They are also intensely proud of China, and being Chinese, and they think all China's problems are due to western humiliation over the last 200 years. So when the government says it's all down to corruption by some filthy western company corrupting a small time local official, and hardly anybody died due to our brave lads fighting the fires and not spraying water all over hazchems, they will all conspire to believe it.