Credit Suisse have ranked the world's military. In order of strength.
Size and budget doesn't matter much here. Its the power to project that is important in the strength rating. The scores for military might are as follows.

The factors under consideration for military strength and their total weights are: number of active personnel (5% of total score), tanks (10%), attack helicopters (15%), aircraft (20%), aircraft carriers (25%), and submarines (25%).

So the CV, CVE and SS, SSN types are accounting for 50% of the score.Which might explain why Italy in eighth place, ranks above the UK in 9th. Despite the Italians spending about half the UK does on its total defence budget.

The Italians have the Cavour class light aircraft carrier. And a mighty fine mid-sized carrier it is.

Credit Suisse make no secret of the fact they take no account of training. Experience. Quality of equipment. Availability of reserves. Combat history. Logistics support. Officer training. Morale or any other factors. Its a pure percentage base, X, assets result.

The UK is usually 5th or 6th in world strength rankings. 9th is a bit of a come down. Our 10 submarines help. But the lack of any aircraft carriers is seen as a huge disadvantage to our strength.

Moving up from 9th in the world rankings and into our old sphere to 4th is Japan. They have 16 submarines and four "Destroyer Aircraft carriers" 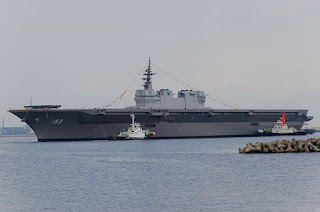 The Japanese were sort of forbidden, Versailles style, from having aircraft carriers. The victorious WW2 Americans not fancying another Pearl Harbour. The Peace Constitution limits Japan to defensive forces only.
So this flat top with 9 helicopters, the potential for 14, and the absolubte possibility of basing the next generation of vertical or very short take off fixed wing aircraft on them is a mini carrier.Its just called a destroyer.
These destroyer carriers are very very advanced. And cost about $1bn each.
The new UK carriers will come in at somewhere between £3.5 & £5 billion each. But with considerably greater aircraft complement.

There was considerable argument at the time of the announcement of the desire to build new UK carriers, about whether smaller, ships carriers  should be built instead of the two huge CVs. The UK put contracts out for the construction of our two in 2007. And they should..well..possibly..could be ready for service by 2017.

But either way, right now, without even that 2% commitment defence being missed, according to this one measure, UK military strength is fading. Its a navy heavy weighting, to be sure. But we are a maritime power. We are an island. So..we should naturally do better than the landlocked, small coastline nations.
But it could be worse. We could be Germany - Down from 8 to 18

To be devil's advocate I am suprised we are so high, after two effective military defeats in the last 15 years to irregular forces and diminishing strength. I grew up with the stories of bloody mindedness of the our blokes, bravery and inventiveness in the face of idiocy (our own) but now I fear the budgets, the equipment and the re-organisations have taken their toll, projecting force no longer. I wouldnt want us to take the Turks on for example.

Defence strength is not a factor of your spending - but an indication of your strength in engineering and related technologies.

A history as a naval power was founded on the shipbuilding skills. But you can always buy it from the USA whose idea of engineering expertise is to build it bigger.

No surprise in seeing Japan, Taiwan and Israel there. Israel have a particular depth in related technologies but the last time I dealt with them, their purchasing organisation was s**t.

I didn't understand much of that, i.e. veracity of criteria - but assuming they're decent metrics then it's quite interesting comparing last year with this as they must be medium term strategies. Japan and Germany are significant and it'd be if Israel dropped off for a few years due to their neighbours kicking each other for a change. No Saudi Arabia or Iran - bit surprised about Saudi - they really are lazy pervs.

And why the chuff is Australia on the list - chav penguins with a few irrational gripes?

the Russians too have a 'rationalistic', numbers-based approach to their military doctrine: e.g. their manuals say things like "to destroy an entrenched infantry company requires 42 rounds of 100mm artillery"

(in the Red Army days, as well as being marxist-determinists / fatalists [which drives them away from reliance on initiative and towards blindly-followed formulae] they were more-or-less forced to have such a simple system by dint of their huge, ill-educated conscript forces, coupled with extreme cold which seriously addles the brain)

in the days when I was studying Russia professionally, the tables and formulae in their manuals were based on the 'standard infantry unit' which was a US Army company: other armies were awarded a multiplier factor to quantify their relative strength + capabilities

so the West Germans were 1.1, i.e. 10% more effective / difficult to defeat than US; and we were awarded a demeaning 0.7

until the Falklands in 1982, after which we were upgraded to 0.9, based on their observation of the hitherto unrecognised X-factor qualities of *British Fighting Spirit* or whatever it must be, see BQ's list of non-equipment characteristics

PS as regards the Jap 'destroyers', I recall the RN's light carriers of the 1980's vintage were originally called 'through-deck cruisers' to avoid calling them what they really were

(PPS the RN today is really, really up s**t creek without a paddle, or even an inflatable: subject for another post another day)

As an experiment I would be pleased if all expenditure on all these boys' toys was stopped. Who cares about our world ranking?

I reckon we could still have the French.

I see this "power projection" metric places no value on the RN's 3 amphibious landing/warfare ships. HMS Albion, Bulwark and Ocean. Have to admit I fail to see much value in 2 of them either - their purpose seemed mainly to give UK shipbuilders something to do post Cold War.

The RN obviously thinks likewise as one was mothballed ("extended readiness") in 2010 - a very unusual thing to do with a 7 year old ship. We desperately need to bring more rationality to military capital spending, rather than primarily trying to give the military industry something to do.

The French and others get far better value for military expenditure than we do. I blame MoD civil servants, who in my experience are all utterly useless.

The main threats to us are cyber warfare and terrorism in the main. i tis right that spend should be focused there and as a resutl we will drop down these tables.

Also, where are the drones, the most useful bit of kits we have. How many of these you have is key - as ever with these list, they are fighting the last war in outlook.

Anon
You are the minister for defense and I claim my five pounds.
EVERYBODY ELSE cares. The peaceful and luxurious, lifestyle you enjoy has been achieved because of all those " boys toys" protecting its interests. Like the little bully, European leaders have been able to do their willy wagling because they have had the colossal US stood behind them. However with the US in decline it can no longer afford it's standing army. This is going to leave a power vacuum and the people that want to fill it, may not have your welfare at heart. They may just want to feed their kids instead.

As another experiment lets "bomb" people in Syria/Iraq/other places where we've used weapons etc with food parcels/water/flowers/anything useful they might need eg tents...