I am in a ridiculously upbeat frame of mind just now, it obviously can't last.  The John McDonnell / Mao thing is just so funny.  These eejits just can't help themselves: they are totally resistant to spin-doctory advice, based on a lifetime of not giving a toss (and of being listened to by an average audience of three Trots, a couple of Respect voters whose grasp of English is not that of a native speaker, and a granny who didn't manage to get out of the social club before the comrades started their meeting).   So they are doomed to crash and burn.

Thus we have the spectacle of most Labour MPs, every newspaper, and half the CiF brigade declaring the rather trivial episode to be a Total Disaster; while the other half-CiF cries "where's yer sense of humour?" in a rather plaintive fashion.  Haha! - I know where mine is. 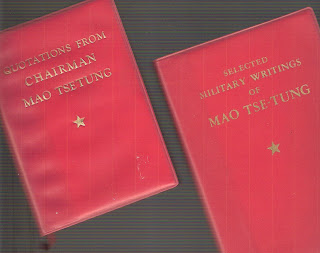 Actually when it comes to Chairman Mao (and I shall continue not to say 'Zedong', on no less an authority than the Chinese Embassy from which I obtained the volumes pictured herewith), although his Little Red Book (which in 1972 I was given for free!) is no great shakes, his Selected Military Writings (for which I shelled out 40 pence of my own money) are a really cracking read, I would recommend them warmly to any student of military matters.

The thing is, I can say this, McDonnell cannot - in the same way that no elected politician of the Right can enthuse about Nietzsche.  The reasons are stupid but compelling nonetheless, and only a rank amateur misses the point.  As they say in the army, if you can't take a joke, you shouldn't have joined: or in this case, if you want to be free to speak your mind, you can't be a front-bench MP.

Speaking of which, I laughed like a drain when I saw the verdict in the Yeo libel case.  Haha!

But it can't last, I know this.

That this such-and-such and whatnot garners comment from the blogeratti is instructive; theres always going to be some button to push with some constituency.

Corbyn has increased Labour membership and participation; can the same be said of Cameron/Osbourne or Milliband/Balls?

In these straightened times (with a lot more to come) can we really ignore the impetus behind Farage and Corbyn? The centre/managerial/Blairite/Status Quo/Establishment is under attack and they are profoundly worried.

As they should be.

We must decide, then, the very constitution of what(inevitably?) follows.
This is, surely, the task this blog; We are the political discourse, competition and compromise that informs what follows; can we agree on that?

Perhaps he could do a big swim in the river like Mao did, taking off from Westminster Pier, then he could meet Ken coming the other way from the old GLC, and they'd crash in the middle.

That would be a parting of the waves...

Corbyn has collected every middle-class lefty/Gramscian Marxist nutter under his banner. He offers a lovely warm home to hunt sabbers, greens, vegans, anti-semites and Islamists. (He doesn't appear to realise that gays and Islam don't mix, but I suppose brown skin wins in PC top trumps.) You won't find many of the people Labour was actually set up to represent, that's for sure. It's as if the Judean People's Front has taken over command of the Legion. It really is hilarious.

Crap guy hits a bum note. Impetus? Have you seen the poll ratings for these mad lefty fuckwits? Even the dogs in the street can see Corbyn loves every country except his own. His answer to existential danger is to organise a petition.

Corbyn may have increased Labour participation, but he's decreased the public's in Labour...

It has been funny the last couple of days, but the joke is wearing thin now. Osborne getting by on luck isn't great for the country, we need a decent opposition to bring him to task, not these jokers.

I doff my cap to Corbyn for sticking to his guns, but being leader means sacrificing your own values for the benefit of your party and your nation. It's what leaders do, lead.

Osborne should've been skewered, instead McDonnel has taken the limelight of Osborne's failings and shone it on his own buffoonery.

We've now Syria, and we've seen just how cack-handed the Tories currently are with the mess in Libya. And with Corbyn, they've got a ready made human shield for their own failings again.

Osborne's luck will run out, the question is whether he'll still have Corbyn the Clown and his merry troupe of fucktards to parade in front of his next omnishambles.

To be fair to Osborne, he saw the shadow chancellor's little joke book coming his way and belted it out of the park with that

Seems as tho' may have a perjury trial on his hands as well. Please!

Meanwhile, here's where Jezbollah likes to hang for some peace and quiet, including a full account of what goes on there...

McTernan last week in the DT wrote that "This week has been Labour's worst ever. Until next week"

MCTTCN - We must decide, then, the very constitution of what(inevitably?) follows. This is, surely, the task this blog; We are the political discourse, competition and compromise that informs what follows; can we agree on that?

that's quite a manifesto, pal - nice of you to suggest we are up to it (up for it?)

modest chaps that we are, we tended to think we were here for our own amusement, + that of our loyal readers (Sid & Doris Bankers)

"The centre/managerial/Blairite/Status Quo/Establishment is under attack and they are profoundly worried."

Quite right too. They've had it their own way for far too long and have grown fat and complacent plus they cost us an inordinate amount along with their super-rich banker pals. Thank goodness for a bit of honesty and people sticking to their principles.

I am away in Mao land next week as it happens - not sure what I will make of it but will try to blog a bit.

I love the way the Corbinistas turn up and declare that JC is sticking it to the establishment, and is invigorating politics, or whatever.

All of which actually means some unwashed Trot has paid £3 to 'join' the Labour Party to vote for JC and all his similarly minded friends have done likewise. Thus 'everyone' is getting behind JC.

Meanwhile out in the real world, of people with jobs, and careers, and mortgages, only 6 months ago over 11m people voted for Cameron and his merry band of ToryScum™. One assumed that was because they preferred him to the mildly Lefty Miliband. However I suppose one could now conclude it was because they viewed Miliband as not Lefty enough, and now St Jeremy has arrived will all fall in line behind the old school Trotskyite.

Or one could conclude that the Leftist sound chamber is full to the bursting of all the usual rag tag social justice warrior types, and they are all involved in a mass circle jerk telling themselves that they are sweeping the nation with their New Politics, while the rest of us laugh ourselves stupid.

Resistance to spin-doctery advice is a bad thing ???

As it happens I too have concerns about China's involvement in our infrastructure. Who would have thought that the road from privatisation would have led to this ?

Two posh twats chortling on the front bench is what I noticed.

I suppose it's all good if you're into the fan-boy side of politics.