Capitalism At Work, It Never Fails

So*, speaking to a builder mate of mine, he says the next big thing is golf courses opening their doors as landfill sites!  The cost of sending stuff to traditional landfill has been deliberately made prohibitive, plus penalties for councils that fail to 'recycle' to the policy-makers' desires.  So guess what?  Yup, capitalism - that great institution for spotting arbitrage opportunities and acting upon them - has identified a creative solution. 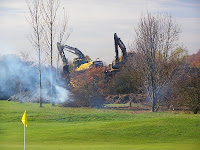 So who has lots of land that could make constructive use of mountains of, errr, stuff?  Why, golf courses!  They always enjoy a bit of new *ahem* landscaping.

Tipper trucks by the thousand, he says, are entering new destinations into their satnavs ...

Someone's been watching The Simpsons. In one episode, Homer is in charge of refuse collection and disposal and one of the places where he buries it is under the golf course. Eventually the refuse starts coming to the surface.

This looks to be price arbitrage via a market mechanism rather than Capitalism?
I often see examples where Capitalism is wrongly attributed all the good things that free markets bring. Markets have and do work and exist outside Capitalism. And Dear Readers of this comment to critique Capitalism does not mean there is only the false dichotomy of Capitalism vs Socialism.

It's an Irishism - tho' my eldest, who has lived near Kilkenny for years says that the Irish often start and finish a sentence with "so", e.g,

Elby, I know and very much enjoy the Irish way, I have spent a huge amount of time in Dublin & Cork

(I like the way they start every other sentence with Oi'l be haanest wid ya ...)

but this one is, i think, different: it started in Academia, where lecturers always respond to questions with 'so', and then a noticeable pause as they limber up for their answer: in former years it might have been 'OK'

"in polite company every sentence should start with "so". So saith ND.

Zak - I'm not sure there's a definitive definition of 'capitalism', but I associate well-functioning, broadly-capitalist societies with (a) the freedom to access and own capital (b) the freedom to use it more-or-less as you wish, importantly including to exploit good (money-making) ideas

hence, it functions as (inter alia) an abitrage-machine: find the arb opportunity (in a market, as you say, but maybe not in a market, just generally 'out there'); deploy your capital (and raise more if needed); test your opportunity & see if it's real; if so, make the £££ and they are yours (and your stakeholders)

well, not too much, anyway - all of life's a compromise

socialism tends to revolve around hindering or indeed completely thwarting aspects of this highly virtuous dynamic, e.g. interposing Commissars for Ideas (and amazingly, the answer is always either No, get back to your work, or Yes, provided you cut me in for 20%); denying access to capital; denying the right to accumulate capital, either directly or through punitive taxation; etc etc etc

My golf club is getting a load of landscaping done for free by taking the spoil from building sites and road works. We've effectively been paid to take it and that paid for the topsoil and other works.

I too have noticed this recent adoption of "so" at the beginning of replies. This joins the other phenomenon of anyone who thinks they're important of liberal interspersions of "er" in what ever they're saying.

Some time ago there was the fashion for pronouncing every "a" as "A" instead of "u" if you get my drift. I first noticed it from William Hague but it was soon commonplace and still in much use today.

I've often thought it would be more cost efficient to "mine" landfill sites for metals eg aluminium, steel etc and also all the heavy metals from batteries rather than in conventional mines. I've no idea why it hasn't been done but I suppose it's too late now while there is a glut of commodities.

Jan - it is looked at all the time (esp industrial waste), but rarely proves economic

as you say, commodity prices are rock-bottom, as happens in cycles - and then people are outraged when they find their painstakingly recycled stuff being burned etc (an MP of my acquaintance was being shown around SELCHP, a large, flagship energy-from-waste plant, and was being told how otherwise the 'waste' would go to landfill. They were then taken to watch the 'waste' being offloaded into the furnace - and the first truck to arrive was full of nicely baled 'recycled paper' ... red faces all round, another great triumph for the greens)

I've always said the best (and most environmentally friendly) thing to do with domestic waste is bury it, extract the methane to generate electricity, and then leave all those (one day) valuable plastics, metals etc in the ground to be mined by our ancestors when the price has risen sufficiently to make it profitable.

Incidentally the golf course/waste disposal thing has been done for years - a small 9 hole course near me was built back in the late 90s/early 00s by a chap who got a waste company to bring in all the material and landscape it for free, because it saved them the landfill tax. Rather than pay to develop a golf course, he was paid to do so, and had a asset at the end of it.

So... I took this small rubble bag to the dump and they charged me £4 to take it.

So... predictably our beautiful area is now blighted with fly tipping (not me btw)

I shall be 'landscaping' my garden next time I rip the kitchen out but am aware that my garden has already been 'landscaped' several times by previous owners.

Nick - Yes, I knew SELCHP well, but it's not really the consortium's fault but EU law. You see, councils have to meet targets to *collect* a minimum %age of recyclable waste; they're under no obligation to recycle it. So the kerbside waste streams are segregated for the purpose of complying with EU recycling targets, not because the segregated wastes can be economically recycled.

Once weighed and counted for Brussels, low grade waste paper is probably best incinerated for heat and power anyway.

I work in the golf construction industry. There are many golf course built atop landfill sites that were previously large holes in the ground (quarries or open cast mines). However the amount of fill you can get onto an existing golf course (and retain it as a course after) is limited.

That said this is nothing new; plenty courses have brought in landfill to re-shape areas or to dump in the roughs and paid for a clubhouse refit/course improvements on the proceeds, but the volumes are relatively small and this is inert fill only, not household waste.

You won't make a fortune buying a golf course and covering it in landfill, for a start the price of golf land per acre is greater than agricultural land per acre, so why would you? Also at the moment there are still a few holes left to fill.

The other alternative use for golf sites in urban areas is for garden allotments. I'm surprised this has happened more. Golf demand has been declining over the last few years, apparently middle aged golfers are now cyclists/triathletes and everybody wants really expensive home-grown veg.

This has being going on for some time.

A client of mine has made serious (and I mean serious) money from doing this, as well as massively improving the course.

Typically, the EA are trying to make this more difficult, but it's certainly still possible.

Any club members reading the blog should be able to get lifetime free membership from their clubs. But try and get mutuality of trading agreed with HMRC if you're a members club, to avoid paying tax on at least some of the gain.

Have to imagine some of the types involved in this 'trade' are best supped with using a very very long spoon ...

remind me to post on recondite subjects more often, this is a great trove of comments: welcome to all the first-timers

I can just see the revised club rules, after a landfill operation...

Members may lift and drop their ball within two club-lengths close to casual methane gasses.

Seagulls can only be attacked with a one iron.

All metals retrieved from the bunkers remain the property of the club.


So, with regard to doing business with commisars, this rather shook even my cynical soul.
http://www.coyoteblog.com/coyote_blog/2016/02/when-julia-tried-to-start-a-business.html?utm_source=feedburner&utm_medium=feed&utm_campaign=OFeed%3A+CoyoteBlog+%28Coyote+Blog%29

Living in an area subject to coastal erosion, I have often wondered why the inert material sent to landfill could not be used in selected areas to replenish the coast line.

auralay - interesting link: mercifully, UK regs are not quite as oppressive as US 'Germanic' bureaucracy (which we've written about here before) - but see also this recent piece from our very own Mr Quango