Settling in for another weekend of Six Nations rugby as the tournament rumbles on its satisfactory way.

I write as an Englishman, of course.  Ireland and Wales contrived an early draw which is hardly helpful to either cause: the Welsh and French must slug it out at 8pm on a cold winter's Friday night (what's that all about?); and the others will contest the wooden spoon.

That Eddie Jones, what a card.  Maro Itoje?  Nah, mate, he'll be great one day but it's too early just now.  Then, a couple of weeks later - I told him he had to work on a few things; he's done that, and now he's ready.  Elliot Daly?  Nah, mate ... then, a couple of weeks later ...  Good enough for me: Daly should have played in the RWC and he can't get into the starting line soon enough SFAIAC. 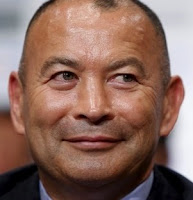 And I like the gracious way Jones is allowing the hapless and hopeless Robshaw a dignified passage to the bed nearest the door.  He still has to fix Farrell's petulance though.  Another gratuitous display last time out: it can't go on.

Jones' arrival seems to gave galvanised everyone, notably including James Haskell (and his agent / ghostwriter) who has gone into overdrive on the mouthing-off-for-the-journos front.  We've had issues with the puffed-up, pumped-up Mr H before, and he's still a big oaf: but he's done his time, worked his passage, obtained a sense of humour and - within his obvious limitations - playing better than ever.  The RWC fiasco wasn't down to him.

But back to Jones: it's great to see someone with such a crystal-clear view on what needs to be done.  "We're only under pressure when we don't know what to do" (which is true in almost every sphere of life) - he's thought it all out and lets them know exactly what to do.  Speaking of which, Jonny Wilkinson is equally clear-sighted in his match-day punditry for ITV, with instantaneous, incisive (and utterly authoritative) diagnoses + practical prescriptions.  He'll make a great coach, too, if he's minded to give it a go.

Wales will wallop France and then get the better of England (again), and India will win the T20 world cup to bag me a 12/1 double.

"hapless and hopeless" is in the great tradition of England sports captaincy. Bloody Aussie, eh?

Six Nations rugby is getting so boring that I'm tempted to give it up. The World Cup really drove the point home. It's not just rule changes that are required, it's more intelligent, skilful players. Hell, when I was a schoolboy we at least tried to play rugby even though we weren't much cop. You know: pass the ball in front of the breadbasket of a team mate who is already running - that sort of tactic.

I had a look at that 1954 game, Demetrius - boy, they didn't hang about when it came to setting scrums, did they?! Although they were slighter men - amateurs, not gym-bunnies - they must have been pretty fit to play the game at that lick

(the hakka was funny)

dearieme - indeed: the number of 'standing' passes these days is amazing: but I think it's a product of the emphasis on having a defensive wall, everyone is just standing around being a brick

I was there, on the South Bank, it was a hell of a game.

The second place playoff last night was so tedious I dropped off in front of the telly.

As a once-upon-a-time prop forward I must say modern scrums are absolute bollocks. I find the spectacle of some slim-hipped ex-threequarter referee telling the props what he wants ("shoulders higher... Closer together... Don't point this way, point that") utterly absurd. They clearly have no clue what is going on and they are making it worse.

And the kickers need a stop watch and 20 seconds to get it over with. If Dan Biggar wants to have an attack of St Vitus's dance he should do it on his own time, not on the 60in screen in my den, wasting away the precious remaining hours of my life.

"Although they were slighter men": yeah, I could do without the pharmacological enhancement too.

It's like those folk who slag off modern cricketers who can score at 8 an over off mystery spinners and reverse sweep test match standard fast bowlers for 6 as useless. There's now a firm in the USA that is trying to coach failed baseball players to win T20 contracts. Things move on. What's actually happening is that we're getting better at rugby, better at cricket, just as we keep getting faster at the 10m.

Maybe they need to change the rules to let them throw the ball forwards? The Superbowl seems to be going from strength to strength.

As a spectator sport Six Nations rugby is not getting better. That is the complaint. Part of the problem, perhaps, is that too many of the players are burly oafs but rotten footballers.

Well, if it was any good as a spectator sport it would be on Sky by now.

It still concerns me why we need an Australian to firm up a national team. The Australian in me says because we're hard but the Englishman says why aren't we then?

@steven_l: no one disputes their athleticism and skill level, nor hugely increased size & strength over even 20 years ago. The problem is it has become a dull spectacle. It's getting like Rugby league without line breaks.

I dispute their skill. Either they lack skill or their coaches are terrible, or both.

"It's getting like Rugby league without line breaks." Yep, it's really that damning.

Maybe they should copy League in making it 13-a-side, and copy Sevens in making the scrum 3 vs 3.