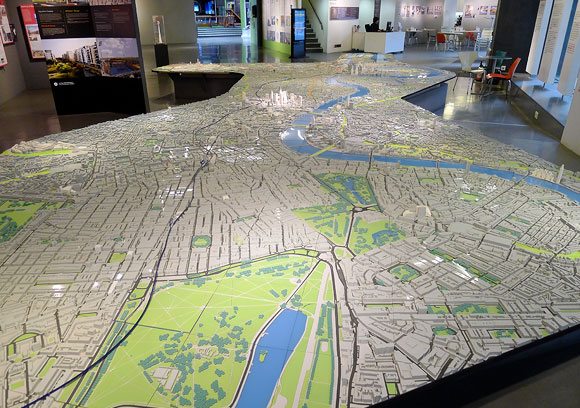 Even the Financial Times has caught onto the fact that the London property market has hit a peak.

There are huge amounts, over 56,000 of £1 million+ flats being completed by the end of next year and yet sales for last year for this kind of apartment were 3,600.

Any fule can see this huge mismatch is going to cause a crash of sorts.

I can't quite decide how crashy it will be and whether it will also extend majorly into commercial property.

On the one hand, huge over-supply at this level should be enough to casue problems. Hedge funds has big short positions in luxury housebuilders which tells us what they think as to the future market direction.

On the other hand, the fall in the value of the Pound of late will act as a rally, given most of the properties are paid for overseas, this will balance some of the impact as it did in 2008-10 when the market fell less than 20% overall and was fully receoved within 2 years. Also though this time there are huge lumps of property (Battersea Power Station is the epitome) where 10% down local currency deposits were used to raise funds and show the property was sellable off plan. These 'investors' (what do you call people in Jakarta who turn up with bags of cash to a hotel event to buy London property?) are not going to complete on their purchases and will try to sell them on - this phenomonen will cause a big ripple in the market as London discovers that many of its 'sold' properties are no such thing in reality.

Of course, at the bottom of the market for the real people who live in London as opposed to overseas investors, demand is huge; the wave of demand is only increasing but it has to be for properties £500,000 and less, even half, of that for the rental sector to make sense. This puts a firm underpinning to the market that will stop a real rout.

So it is still a mixed picture unless you ust paid £5,000 a square foot for a speculative opportunity in Mayfair...

And for our next trick?

Once African holes in the ground listed on the LSE/AIM and pokey apartments in SW3 lose their appeal what'll happen to our balance of payments?

We need the correction. We've been putting it off for 8 years.

To overcome the housing shortage in London for poorer people I think we need to build over Hampstead Heath. Fortunately the people who live thereabouts are always very keen to express their sympathy for poor people, so there will be no objections. Specifically, work should start immediately on hostels for "refugees" and asylum shoppers - sorry, asylum seekers.

Given the ownership patterns in the London area, the invisible money involved and other things, this may not be a simple down in the market, it could go chaotic and if so the ramifications will be big, unpredictable and extend the damage into many sectors.

For most people (all of us up north?)the property prices in London are of no real matter and mainly just a source of fascination.For normal folk in London (I presume they exist)I can't imagine what it must be like trying to set up some sort of decent life around owning a halfway decent home.

Osborne is well aware of the potential instability of the London market, and I suspect Help to Buy London (e.g. 40% loans for property up to £600,000) is a direct result of this. The scheme should help underpin prices for the foreseeable and future. Otherwise a fall in values will bring down the wider economy.

There are still normal people in London?

While the adjustment takes place what happens to the supply of overseas investors key to making the whole market so hot ?

I'm a long time poster here on this subject and I cant believe its taken so long for this to surface as a mainstream topic. One of the reasons for this cited by - was it Faisal Islam? - was that so many BBC execs had money tied up in BTL and so it never made the headlines.

Lets get to the bottom of this and all our other problems - Debt.

When we talk about property prices (nationally) we need to talk about the amount of debt secured on these properties. As has been mentioned before up to 35% of outstanding residential mortgages and up to 85% of BTL mortgages are Interest Only.
This essentially means the same as if you were only paying the interest on your credit card; you have over-extended yourself and you are in trouble.

Chew over those figures for a minute, then recall that most of the BTL mortgages are secured on Boomers paid-off homes. Many remortgaged their homes to get the deposit (often 10% or 30%) to buy BTL properties.

Now remember that these are on Interest Only payments, many taken out when interest rates are at multi-decade lows. No capital payments are being made and likely no provision is being made either. The default position if a problem occurs is 'We can just sell it'.

What you have here is the financial and economic equivalent of a fucking tinder box.

As I understand it current mortgage volumes are running at about 50k per month. I know from a few years back that levels of about 75k equate to stable prices and over 90k per month to sharply rising prices.

The gap is (was?) being made up by enticing foreign buyers; essentially the government has sanctioned a sell and lease back operation of UK land to the detriment of its own citizens. With wages largely stagnant how is anyone to afford a property?
The solution is to import massive numbers of extra people who need to be housed. Intensify the pressure on younger generations and damn the consequences.

Think you can rig markets, rates and house prices to advantage your clients?
Think again Cameron, Carney, Brown and Blair.

I cannot wait until June 23rd to fuck this government and its civil service mandarins good and proper.

"The gap is (was?) being made up by enticing foreign buyers; essentially the government has sanctioned a sell and lease back operation of UK land to the detriment of its own citizens. With wages largely stagnant how is anyone to afford a property?
The solution is to import massive numbers of extra people who need to be housed. Intensify the pressure on younger generations and damn the consequences."

And now we hear that to increase minimum wage, to remedy this situation, will cost 900,000 jobs.

What a bloody mess.

The yawning disparity between average London wages and average London house prices is what shows us a big correction will take place - once the foreign speculators have taken flight because 56,000 overpriced flats have tipped the market.

If the market is going to tank, and they are going to lose all their money anyway, we might as well clobber them with some kind of annual tax to ensure they realise their losses and don't leave places going derelict.

Steven - If they have any collective sense then leaving the places to go derelict is exactly what they'll do ... to set a firm base to their investments.

Whether or not panic selling will set in is another matter.