UK Leads in Race to the Bottom?

It's often said that countries are pursuing self-defeating beggar-thy-neighbour policies as regards currency: an unseemly race of competitive devaluation.   Hard to remember - though I just about do - that for Harold 'pound-in-your-pocket' Wilson it spelled disgrace; and that for his Chancellor (Callaghan), well, he Had To Go.

I was always rather impressed by the quiet, unemotional way in which Brown/Darling allowed Sterling to fall steadily and indeed rather dramatically from $2.0 in July '08 to $1.4 by March '09 in the wake of the giga-crisis: we used to run a sidebar graphic recording this, month on month.  It might have been the cleverest thing they did.

Anyhow, to read the headlines just recently you might have imagined it was the Japanese who were most concerned to devalue.  But in the race to the bottom, taking the last three months it's sterling in the the lead!  Again, all rather quiet and unemotional - it just isn't political news anymore.  Helps that oil has fallen even faster, of course ... 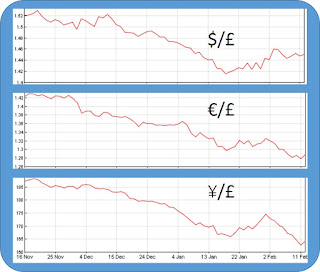 We're down against the Yuan, too, over this period, though not by much: and the dollar has pushed down a bit lately.  Watch out below.

Which in turn might make for some nice surprises when London listed multi-nationals report their earnings.


"A weak currency arises from a weak economy which in turn is the result of a weak Government." (1992)

If you want to know the best time to buy euros for your summer holiday, it was about 8 weeks ago.

Our gold and silver ETFs have been doing well recently.

Not that we're "gold bugs" - oh dear, no. Just diversifiers.

I love floating exchange rates, and not joining the Euro.

tolkein - yup, I should have credited McBroon with keeping us out o th EUR, too!

@ND - I'm not sure we ever really found out Brown's motives for exclusion from the Euro but i've taken it merely to piss Blair off.

Sure, the ends justify the means but obstructing your gaffer because you want his job kinda traduces rational analysis. Great decision, shite process.

So, will we devalue?

I dug out Michael Porter's stuff on Competitive Advantage of Nations from 1990. Back then Japan and Italy were the whizzy places for biz school case studies. All looks a bit sick now. A more dismal view is that there is very little a nation can do to stave off a long term regression to the mean with some offsetting due to social capital. But the less you develop social capital the less useful your stock of humans becomes - George take note.

Dtp,
It may have had something to do with the restrictions that might have been placed on his mad spending/borrowing make a client-state scheme as well as his I-RON Chancellor /heir apparent image-building.
And of course to piss Blair(and Lady Mandelson)off.