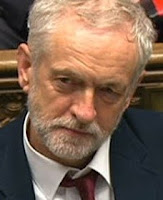 Here's an open thread to get you going.

Email ThisBlogThis!Share to TwitterShare to FacebookShare to Pinterest
Labels: Corbyn, Politicians at work

Yes maybe, but how could he do so any time soon without being seen to fall on his sword because of an unsolved anti-semite problem in the Labour party under his watch?

And who would the comrades choose to replace him?

He knows that with the present make up of Labour MPs, and the current party rules, another truly left-wing contender would not even be selected by the MPs. So it will be his duty to the left-wing of the party to stay in post until after the next election unless the party rules are significantly changed beforehand, barring health issues or a truly major scandal. Even if he is very ground down by being leader; though his youthful supporters are likely to keep his spirits up despite what might be said in the media.

I won't believe that he is going to resign until he makes a speech claiming "I'm no quitter". On second thoughts, perhaps his one merit is that he doesn't speak in silly subAmerican, so I don't suppose he'd use "quitter".

Well I reckon labour will get trashed in the Scots elections this week. But he might not cop the blame for that, so are there many council elections down there for him to get trashed in on Thursday?

Corbyn is the epitome of an incompetent scatterbrain loser probably too stupid to resign when a situation arises that would require that action. He would be unable to comprehend what he had done wrong and/or to offend. Putting him in a position of responsibility is promoting him far above his abilities. Saying something offensive to him would do no more than hurt his feelings he would be at a loss to understand why the world did not see him as he sees himself. A wonderful person with the whole worlds best interests at heart.

The time will come when even his own side will want rid of him. He will fail to understand the reason why and will have to be coaxed into standing down.

If this PLP putsch succeeds, the British Labour Party is a cut flower.

Nope, not going to happen.

The Hard Left have long term aims, having managed by a complete fluke to get himself into a position to consolidate the Hard Left into the Official Opposition party, he's not going to throw that away on a whim, for personal ease, however hard it gets. Corbyn will have been through numerous schisms, crises and Judean Peoples Front vs People's Front of Judea scenarios, he'll have his eyes firmly on the goal of cementing the Hard Left into Labour, not anything else. Resigning would jeopardise that aim, so will not be contemplated.

He doesn't seem to WANT the job.

No, he will not resign. As a socialist, he knows He is right, socialism is right and therefore the people must be wrong. Starting from this point, Corbyn will not resign but he and his politburo will have to devise means of correcting their behaviour. Expect a quiet series of "reforms" within the party, cheer lead by the BBC and Guardian, all aimed at bringing this about. Mr Corbyn will not be defeated, he will have suffered a "deferred success" on the road to his socialist utopia, possibly leading to the active deployment of the "A-Bomb" (Abbott Bomb)...

With Dearieme here. He needs to speak of more time with the family and of the garden.

I agree with Michael (no relation). God help us if he ever got power.

Corbyn is right, reality is wrong, if only enough could see he is right and do as he says, the world would be a much better place.

He has never had to compromise. He's had a free ticket from the bearded wing of the party. A token trot tolerated to give some left wing credible to a mildly left of centre party.
He has never had to change his views sbout anything. He has been in a safe leader his whole career. Do he hadn't even had to fight a real challenge in an election. He has never held any important government post. Never been one of the official faces of the Labour Party. Never been deployed in times of crisis or one of the avuncular MPs bought out for chat shows and media work. He has never had to perform in a crisis. His last crisis was 1983. He decided what that schism required, and hasn't altered his opinions ever since.

A junior teacher who has never had a promotion in 30 years because he is awkward. And a bit cranky. And not very good.

He won't resign. But he might be wounded in a putsch and have to set out a timetable for a handover to a successor.
Which is a forced resignation.

I reckon the stamina he has shown in putting up with a lifetime of marginalisation and irrelevance is not quite the same kind needed to withstand serious pounding (he can't even take being doorstepped, his demeanour is that of a petty criminal arriving at the magistrates court & encountering the cameras, I know I've got to keep walking but I wish the earth would swallow me up)

his sense of 'duty' I grant you, but he can always parlay that into 'I'm letting the side down here'

I don't think he'll resign. He'll quietly get rid of the Blairites from positions of influence one by one and restore the labour party to its roots. He's stuck to his guns this far against all the odds so I can't see him giving up now. Youngsters like him and so do I (even though I don't vote Labour). I admire him in that he has principles and isn't a straw in the wind like the majority of politicians who will go with whatever keeps them in power.

he will definitely go, because everyone does. He knows his job is to cop it whilst the hard left fixes the NEC and J McD burnishes his reputation.

If this needs a few months more of pottering around not doing much then he cant take that, done it all his life after all.

What leader would want to resign when the euroref could be a game changer?

Yep - soz ND, he ain't go anywhere. It's our fault, all of it, if only we'd listen, just listen then we'd see his true brilliance blah blah blah. I've seen Labour guys like him blame everything except the bleedin' obvious.

Everything comes to those who wait and oppositions do not win elections, incumbents lose them. The outlook for the Tories is not very bright, even without Brexit the tax receipt projections are pure fantasy, the NHS funding is fantasy and the NI funding is well under par. The Tories can do nothing to influence world economic events, they are headed for big trouble. The 2020 election will pass by but then the s&*t will start hitting the fan and 2025 may well be the gift Corby et al are waiting for.

We seem to be cheerfully cooperating in the Establishment narrative here, in the runup to Scottish elections which have their own course charted and local elections which don't have that much bearing on GEs. Even Private Eye seems to be digging around Corbyn historically in its fortnightly graphic series, but contenting itself with the usual genial teasing for Cameron. Oh for the good old days when the neoliberal "Left" held hands with the neoliberal "Right", dancing round the maypole towards a disaster that somebody else would have to solve.

If we start thinking for ourselves, what questions should we be asking instead?

Roger - You ARE the ghost of Jonathan Cainer and I claim my five pounds !

I agree with rwendland at the top of the page.

He can't leave. The takeover of Labour (and access to the short-money, and free air time for the Marxists) is too valuable to let fail.