Leadership Bid, or What? 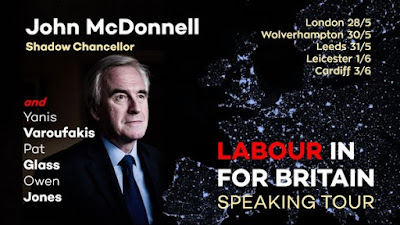 I know you guys don't agree with me that Corbo is a resigner: but Mr M seems to be hedging his position on that, wouldn't you say?

Ah yes, that same Mr. M whose hero is one Lenin, a mass murderer.

If we had a far-right Tory opposition, the BBC and the media would be on a war footing. We have far left Labour oppo, and nobody thinks it a problem at all.

The Four Horse Persons Of the Apocalypse?

Two words missing, "have" and "it". Just prior to "in for Britain"

"McDonnell" in Gaelic means 'twat of the first order'.

What a line up.

There isn't enough money in the Venezuelan oilfields to pay for those mad policies.. bet you £5.
Or 550,000 Bolivars {whichever is the greater}

BQ, they won't be looking for oil.
The search will be for your bank account.

Who knows what goes on in that faecal slurry that lefties use for brains?

But surely Corbyn, deep in his heart, knows that to resign from something, it has to be more significant than, say, the third form stamp club. To resign requires a certain cachet of the body being resigned from. We don't resign from our corpses, we just die. Which is Jeremy's only option.

And Labour, and the left generally, don't usurp the King. Even though Corbyn is not so much a king, more a primary school deputy head boy, I can't see anyone having the balls to take over the reins.


It looks like a poster for one of those american evangelists.

If we had a far-right Tory opposition, the BBC and the media would be on a war footing. We have far left Labour oppo, and nobody thinks it a problem at all. online steroid shop