Labour really miss Alistair Campbell and Peter Mandelson in their PR roles..
They used to have the very best. But these days, no one of any use at all..

The pink bus, possibly the most ill conceived political idea of the century, was actually topped by rushing round to have a Yoof Vlog with Russell Brand. Much too late in the cycle to have any impact that wasn't going to be negative.
Incredibly, even that disaster was bettered. By the Ed Stone. Which became the symbol of the whole, horrifically badly orchestrated Miliband election campaign.
Modern politicians need the best spinners, and the best image makers available.

Many years ago, my highly respected PR company girlfriend, came with me as I was doing the BBC's clothes show.
{Who remembers that show? I did it 3 times! .. none of you remember it? It was the One Show of the 1990s.}
She had heard a radio bit I had done the week before and was very critical of it. Critical, but professional. She did the "This is you...This is what you want to convey. This is what you said..and why you sounded like a jerk...here's how to avoid that in future."
She really was very good. Headhunted by two top firms before she was 28. And she didn't start in PR until she was 25.

If this ex-girlfriend was advising Corbyn it would have gone.

- Why are we on this train? This is a long distance train. We don't want a train that has booked seats.

Don't get on yet. Get an establishing shot. Show the packed platform. Film in tight. Get the staffers around you Jez. Tighter than that..Good. Look packed..

Hey? You!..Why are you filming this on an iphone? He wants to be the next Prime Minister. He's not uploading to Instagram for his mates like he's on the school bus? Get a proper camera..You don't have one? I'm sorry..who are you? You're the Comms chief ?..And you didn't think to bring a decent video camera?..Ok..I see its going to be a tough day..

This train isn't packed..pull the plug now..what? You want to go on?

These are ticket booked trains..this is going to come unstuck quite easily? Ok, if you insist..

..Then find the most packed carriage. Why are you sitting here? ..what's that you said..? "Sitting on the floor makes you look like you can't find a seat?" No..It makes you look like a beggar at a cash point. .. Don't put your legs out..you look like you are hogging limited space..Don't pull your legs up - that look isn't for you. And take your jacket off. Its creasing and making deep shadows and looks untidy. And comb your hair..This is a film to explain some political point? Then try and reach out. The true believers don't care you look like a disillusioned teacher a week before retirement. You need to reach the ex-libs and the now going over to UKIP, former socialists.
Otherwise you might as well just send a tweet to the echo chamber.

Why are you sitting in front of the toilet? Your back is against the bog door. No one sits back against a door that might open. looks like you didn't realise. Or worse, don't care about others needs. Is that Private Eye you are pretending to read? Oh! you ARE reading it? You brought it along for the train journey..I see...well put it away. Get the Guardian..Who's got a copy of the Guardian among Team Jez, please? No One? Seamus Milne? You work fat the Guardian FFS! ,.You say... Its become a capitalist-imperialist-Blairite propaganda sheet? Mr Corbyn..This may be picked up by foreign media ...

Look..You're not reading Private Eye..Reading Private Eye is an invitation that gets you on the cover of Private Eye? Go down this "packed" train and get a Guardian or a Metro..or Angling Times. In fact ..forget that..Don't get anything..You are addressing the camera..you don't need any media..certainly not 'old media' Jeremy..You need to sort your legs out. You have them knees together and flopped into a corner. And this cretin is filming from above. You look like a Casualty actor, playing a disabled victim who's fallen from a wheelchair. 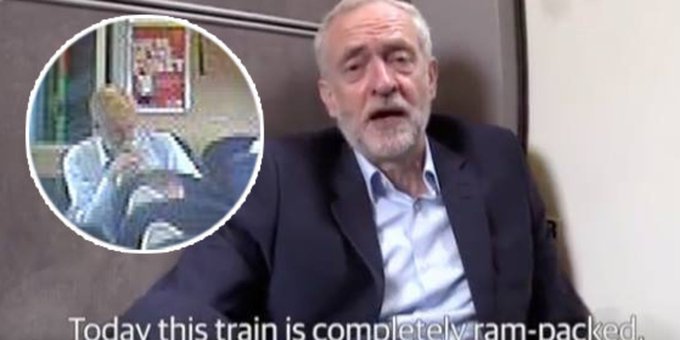 Why are you still filming this on a phone? We can't hear what he says..He's on a moving train, in a corridor. And you are trying to get his words on a phone?

Jeremy..There is no such word as ram-packed..Its either Packed. .. Rammed... Jammed, or Jam-packed. Do it over..

Bend one knee up, put one leg half under you. Then rest..CASUALLY REST.. one arm on the knee..on the up knee Jez..Ok..Why are we filming this here. Either get in the bog and say this was the only seat and make a joke about Waterloo. Or film by the carriage door so over your shoulder the packed train interior is visible. Then you are standing up and don't look so homeless and tramp like. Spare £3.50p for a bottle of Virgin Trains Elder-flower, guv'nor?

You are concerned that diminishes the message, Mr Milne? What message is that?
The one that tells people  that trains are quite full?
That since 1991 you have needed to book in advance for a journey?
That the reserved seats empty after the first station?
That if you move along you may find an empty seat?
And if you don't ask the train crew.

Everyone knows this already. This isn't news. It isn't policy. Its just a message of the bleedin' obvious.
If you want to show the merits of nationalisation, go on a nationalised, efficient train in Europe. If you want to show a bad service, go to London Bridge any Friday night.

Then say
"This is shite..we will fix it by doing XYZ and it will cost ABC and take PQR amount of time"

Ahh, she was good. She was earning £60,000 when she was 28, back in the 1990s.  The following year she gave it all up to have a baby and quit for good. Never went back. Women in the workforce..
but that's a post for another day.
Posted by Bill Quango MP

"get a Guardian or a Metro..or Angling Times"

Or DrainTrader (the essential read for manhole cover anoraks)

You look like a Casualty actor, playing a disabled victim who's fallen from a wheelchair.

when can she start?

PR stunt, and they never could spell.

None of it matters. If events so conspire he'll win the next election. And if not, not.

@ If events so conspire he'll win the next election. And if not, not

the oracle has spoken!


If events led to the removal of all the cons

It's possibly time for Labour to just fade into oblivion.

Ooh ! I like pushy women with posh voices. Rather like your PR girlfriend I had a posh-totty exec from Total Oil.

Her face was a bit plain but it was the voice, you see.

When she ran out of kinky things to say I used to ask her to read the ingredients off of soup tins while I took her from behind.

Cross Country have taken to booking seats by mobile phone AFTER the service has started. So you can be sitting in an unbooked seat and some bugger can reserve it and turf you out.

They need a guard on the train just to sort out the fights, let alone push the buttons !

"Labour really miss Alistair Campbell and Peter Mandelson in their PR roles..
They used to have the very best. But these days, no one of any use at all.."


THE VERY BEST and probably dredged up from the bottom of some modern Rome sewer and 3000 years of vintage shit in the hole.

Some joke, I don't get it though. I'll never forget a train disaster I missed by the skin of my teeth - and the lavs cynically releasing some statistics proving just how fucking inept/corrupt/lying bastards - you choose.... they were. All the time and echoing in my mind that, famous quote from some skirted government civil servant "a good day to bury bad news" - that unconscionable thought, and straight from the Mandelson/Campbell manual.

NO, in hindsight considering the national and purposeful obliteration... Bliar's band wrought. Campbell and Mandelscum, they weren't slick or even good, they were however cold, calculating, callous and downright evil bastards.

Oi! You forgot to mention that Campbell was loony.

Maybe that's why we like JC though as he's completely unspun...

But badly woven, Jan. This was a hamfisted attempt at spin but spin nonetheless.

Sadly, most Labour voters appear to think that the rebuttal by Branson used untrue footage specially created by Virgin.

Given that level of delusion and detachment from reality, I wouldn't be at all surprised to see an element of violence emerging in future Labour events.

John - (1) doesn't matter (whatever exactly they believe): as BQ said, the image has taken root that Corbs is an old tramp who squats in corners outside toilets, & he will never throw that off

and I note that Momentum have just deleted 'non-violence' from their code of conduct: isn't that jolly?

(1) + (2) = a very nasty few years on the extra-parliamentary front, even as the Labour Party edges towards either electoral extinction, or some kind of cleverly-maneouvering Sadiq Khan vehicle

I hope you're listening BE!

Why are you filming this on an iphone? He wants to be the next Prime Minister. He's not uploading to Instagram for his mates like he's on the school bus? Get a proper camera

I hope you're listening BE!

I'd never heard the term "ram-packed" before either. UrbanDictionary is often helpful in these situations: (NSFW) http://www.urbandictionary.com/define.php?term=rampack