Hitler never gave the order to use battlefield gas. 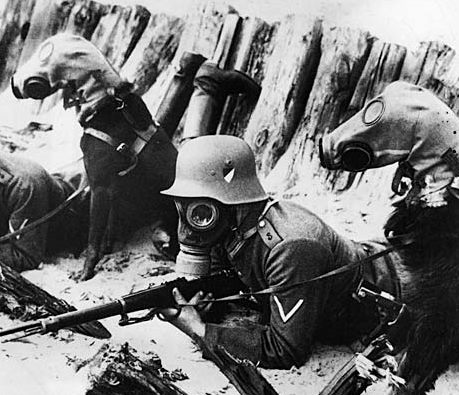 The WMD was plentiful among the warring nations of 1940s Europe. It had been used extensively by all sides during the 1914-18 conflict. And although chemical smoke weapons, that has a gassing effect, were actively used by the troops in WW2 battles, the sanctioning of chlorine, mustard and nerve gases was never given.

This, as should be clear to even a semi-informed student, is what the rather baffling statement Sean Spicer made regarding the Nazis and chemical weapons, was referring too.

“We didn't use chemical weapons in World War Two, you know, you had a, someone as despicable as Hitler, who didn't even sink to the, to using chemical weapons.
“So you have to, if you're Russia, ask yourself is this a country that, and a regime, that you want to align yourself with.”

Has he forgotten the death camps that killed their inmates by the millions with deadly poison gas?
Seems unlikely. He was just pointing out that although the Germans had 7,000 tons of Sarin nerve gas alone, and various thousands of tons of other even more deadly poisons ready to be deployed, they never did. Even when defeat was inevitable.

The Japanese used their chemical and biological weapons in China. Plagues and diseases were dropped on towns and villages killing large numbers of civilians. The Chinese had no gas.
They also experimented with hot air balloons containing explosives floating across to America. They launched thousands and at least one killed a picnicking family.
A pretty useless weapon, the hot air bomb. But development was already underway of a chemical balloon bomb that would poison Americans. It is possible Japan, advanced compared to the Allies in biological and chemical weapons, may have deployed them in defence of the homelands and after an Allied invasion of mainland Japan.

The Americans themselves had vast stockpiles of poison gas. US troops on D-Day had special rubber gas pouches for gas masks The lead assault waves had gas impregnated uniforms, supposedly to render some gases ineffective. Reports said it made the wearers nauseous. All allied troops on D-Day had a paper armband that would change colour if some types of gas was detected.
So the allies were expecting the possibility of its use.
The Russians had stockpiles and of course, so did the British. The Anthrax experiments were real. And they didn't begin until 1942. After the threat of invasion had passed. Anthrax was going to be an offensive weapon. Churchill frequently asked for gas to be used. His top brass talked him out of it.

It was the military, on all sides, and surprisingly, Hitler who was totally against, that stopped the use of gasses. It would be counter productive. It was the MAD-WMD of its day. If one side used it, all sides would use it and there would be no winners. Untold civilian deaths. Cities uninhabitable and armies having to fight in gas capes and gas masks. The Germans worried the Allies had the same very deadly nerve agents they had.{They didn't}. The Allies worried about poison gas bombings of civilians in cities. Both sides knew how the battlefield was made almost impossible to traverse after gas attacks. That the use caused many casualties to the side using them and made attack ever more harder than defence.

So there is no historic dispute that poison gas was available to everyone and everyone decided they had more to lose than gain by using it.

And what the fellow said was - "Even a madman like Hitler wasn't mad enough to use gas."

Marginally less of a stupid statement than Ken Livingstone's "Hitler was a Zionist."
But even that, when you boil down to what Livingstone was trying to say, was factually, if not actually correct. It's an interpretation. A foolish one. A ridiculous one.
Hitler did consider deporting Jews. He did agree to allow Jews to go to Palestine in return for their stolen assets and a hope to stop the World Jewish ban on German exports that worried the Nazis exporting economy.
Livingstone knows all this. But chooses to interpret it as somehow Hitler may have been in alignment with world Zionism, early on. Who knows why he wants to believe that?  But the facts, if taken in isolation, can support that theory.

So, in my view, it is wrong to call for the resigning or expelling of either of these men. They both said true things. In an insensitive way. That was very likely to provoke a reaction they hadn't wanted.
But that's true of a great many people. And their punishment has been they have had a ride on the outrage bus that has taken them to all manner of destinations. none of which was the one they were hoping to arrive at when they were making their original point.
Posted by Bill Quango MP

I don't think that a country that drags innocent doctors off aeroplanes has any right to look down on Hitler.

If you want to read about the casualties caused by American mustard gas in WWII read up on the incident in Bari.
https://en.wikipedia.org/wiki/Air_raid_on_Bari

I think we should all be mindful of the fact that Hitler never commented on a blog post.

Nor did he eat couscous.

Anon - Not a complete turn-around. The debate rages on the United flight thread still !

no need to invoke Godwin's Law these days - Mr H straight in at the top!

only if persistent agents are used - but some of the most immediately lethal agents are non-persistent, leaving the zapped zone OK for subsequent passing-through or occupation by the attacking force

ND. A common historians observation is that the German military was still 75% horse drawn. The animal casualties would have crippled their movement.( the dog masks above, some believe were never really successful for horses.) The US Army gas mark, which is considered the first properly effective modern era one as it was light enough and flexible enough and effective enough to be used in combat, was only introduced in mid 1944.

The soviet s seem to only have had mustard gas. The germans had all sorts of fast acting nerve gasses. The Japanese had devastating, but long term contaminating agents.

And as for our anthrax ? 100 years ? It could only be a retaliatory, MAD type weapon. Conquer the wastelands.

"It was the military, on all sides, and surprisingly, Hitler who was totally against, that stopped the use of gasses."

I don't think it's surprising. He was a soldier all through WWI. That had a big influence on his views on everything.

So Don you are saying that Hitler understood the horror of total war, and instigated Round 2 nonetheless?

You'll have me defending mein Fuhrer next. No. I'm not falling for it.

I think Hitler had no intention of going to war with Britain or the USA. But his ambition to restore the greatness of Germany, mainly by building a land based Empire in the East of Europe, led him into ever deeper waters. Invading the Sudetenland was easy. Invading Poland got him into trouble.

You can see Putin, Erdogan and others going down the same path. They start to think they are Men of Destiny. That way madness lies.

I recommend "Hitler's Table Talk", if you haven't read it. Also "Bloodlands" by Snyder.

I think he's just saying Hitler is misunderstood, much like Mr Spicer and Mr Livingstone.

They're not always au fait with their history, the Americans.

"I recommend "Hitler's Table Talk", if you haven't read it. Also "Bloodlands" by Snyder."

I recommend Bergen-Belsen. Easy to get to via Hannover. Have a stroll amongst the ruins. Pay particular attention to the Russian section. Then have a stroll along to the US "Trump" section and wonder why all the fuss in the US about a few Europeans.

On Red Ken and his Hitler/Zionism nonsense

"Who knows why he wants to believe that?"

Simple. Because Ken, not to pull my punches, is a poisonous cunt.

All this outrage about Ken (and Jezza) is because they consider, not unreasonably, that the Palestinians have had the tough end of the pineapple over the last 70 years. From that all else springs.

Dear old Footy was as ineffectual as Jezza, but he didn't have half his front bench undermining him every other day. Because he didn't 'go there'.

Note btw that Teresa knows in every sense which side her bread is buttered on. I could hardly believe it when she took it upon herself to chalk Obama off about Israel.