Yes, it's been an unhappy turn of events for Nicola Sturgeon.  Remember those happy evenings spent curled up on the sofa, flashing her knees and writing to Teresa May in big loopy handwriting?  Well, no more pen-pals.

We can tell she's a Bad Person, because she's let the orchid die! 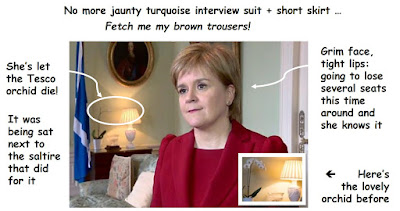 She's got to stop wearing those Power Shoulder outfits. They make her look short tempered.

She's not really politically evolved from a gobby, know-it-all, 17 year old activist. Apparently she got into politics because, and I quote, "Thatcher was the motivation of my entire political career. I hated everything she stood for."

As Mr Ishmael has noted, she's the Empress of Grievance, so in place of a reasoned political argument we get adolescent hatred and bile as a political raison d'etre. If I was Scottish, I'd suspect i'd been err... short changed!

Like getting a fake Lego figure with the arms stuck on badly for Christmas.

An orchid in a desert.

Not enamoured of Krankie then, Nick?

A sage once told me that people complain about features of others which reflect their own flaws, if that makes sense.

The Sturge is a prime example of this. She says that May is cynically exploting the country for her narrow party political ends. Who else might that describe??!!

Chuka says that it is outrageous that the government should try to obliterate the opposition and gain a huge majority. No Labour government would ever do this, would it??!!

I doubt any voter brainy enough to vote on 8th May will fall for that.

I've always been impressed with how tolerant & easy going you English are.

Despite living in England off and on for 40 years it hasn't rubbed off. I'd like the whole SNP locked up for sedition.

She has advanced the idea of the SNP propping up a failed Corbyn-Lib dem coalition of losers.

She has said that today. Voluntarily.

Did she not read about the 5% swing away from labour directly to tory, in 2015? As a result of the Ed in Alex's pocket posters
That made Cameron leader instead of the minority Miliband.

Yet on day one she comes out with the Tories very own successful attack line and uses it herself.

Napoleon would be making very sure not to interrupt her.

Sturgeon (imo) cares not what anyone thinks south of the border.

In scotland that may pass as the helping hand of friendship and slightly up the SNP vote.

That it hurts those she is offering to prop up just underlines the essential differences between the Scottish and English political systems.

Or as the SNP does not field candidates South of the Border it makes no odds? Don't forget, the Nats need a Tory UK government to rage against.

the Nats need a Tory UK government to rage against

Faced with a Labour government, we'd enjoy our own version of the Le Pen / Melenchon Supreme Socialist play-offs between wee Krankie and . All the Nats need is someone notionally English in Westminster.

As a wise man once said, "You'll never confuse a Scotsman with a grievance, and a little ray of sunshine". Living in Jockland for 20 of the last 25 years didn't do much to disabuse me of the truth in that statement.

woops. "" got dropped after "wee Krankie and ".

Oh bloody hell. I give up.

The lamentable irony, if that's the right word, is that they're totally hopeless at running things. They're asking for autonomy without a currency and they can't run a piss up in a brewery with cash being foisted on them!

@BE - Chukka has made my day. You can't buy that level of stupid, that takes years of hard work. See you on May 8th :-)

Yes I will be getting to the polling station early, very early. Vote often, and all.