Well, OK probably the weather - but trains run it a close second.

This past week something quite significant happened: the government scrapped plans to electrify the tracks in areas across Wales, the West Midlands and further up the West Coast.  Cue outrage from the greenies.

Why significant?  Because electricification is the only known strategy for getting anywhere near the UK's decarbonisation "legally binding targets" of 57% by 2030, 80% by 2050.  Electrification of transport and (even more dramatically), of space-heating, see below.  Most eyes - and subsidies - have been on decarbonisation of power generation thus far, because it's the easy target.  But transport (= oil) is about a third of our energy consumption and space-heating (= gas) another third.  So, the theory goes, when you've figured out how to de-carb power generation, you shift as much as possible of transport and heating onto the leccy.  Simples.

Accepting that 2050 is a long time in the future, you'd still expect government to be plodding methodically in that direction if it had these targets as a serious policy priority.  Around these parts we all know, don't we, that GDP trumps GHG - so we're less surprised.  But hard evidence of this important political principle is always interesting to come by. 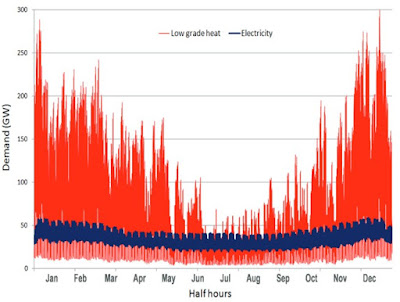 Notwithstanding what a great topic trains is (cue our good friend Kev ...), space-heating is a really juicy one for fans of irrational policy-making.  Above is a graphic from the really quite diligent Energy Technologies Institute which crunches a lot of numbers on these matters.  The dark bands at the bottom is energy capacity used in the form of electricity in this country through a particular year (it's 2010, for reference).  A bit more in winter months than in summer.  And proving very difficult to decarbonise.

Now look at the red plot - that's energy capacity required for space-heating, largely gas-fuelled.  What kind of expansion in the grid will we require to switch from gas to electricity?  How will it cope with those winter peaks?  How much will need to be spent on replacing 20 million-odd old boilers?  Paid for by whom?   etc etc etc.

In the immortal words of ISIRTA: "I'm sorry, it can't be done!"  And I think the government knows it.

If you replace gas-fired central heating by electric, you don't need a boiler, just convector heaters plugged into sockets.

But how to generate all that electrical power ? The only practical and reliable way to do it with no CO2 output is with nuclear fission plants, such as those proposed by Terrapower. We already have plenty of fuel in stock.

My guess is that it will fail, global temperatures will rise by around ten degrees, the oceans will become acid and most life in them will die out, and sea levels will rise by about 60 metres. But this will all take a while. It won't happen in the lifetimes of anyone now planning policy, or their children. So why should they worry ?

you don't need a boiler

thanks, Don - correction made

The interesting comparison would be with a similar graph for France, where most space heating (I think) is already electric. Hence we have UK current demand (from gridwatch) of 31 GW and French, for a similar population, of 48 GW.

Worth noting that an increasing number of peer-reviewed papers are predicting cooling as a result of what looks to be a collapse in solar activity. The climate models and the climate mentalists both pooh pooh the idea that the sun controls the climate, but really.... Sun and then ocean cycles. Òddly, the Late 20th Century warming period, now some 18 years over and massively hyped by the 1998 El Nino, coincided with the highest solar activity in a few thousand years. Coincidence, of course. As were the drops in solar activity which flagged the various Minimums in the LIA.


Sweepstake on how many iterations of car and road clicking i have to complete to post this. I say five this time

> you don't need a boiler

No but someone has to build and supply all those electric storage radiatiors! Plus isn't it most efficient when it's underfloor? If so even more work/disruption.

Or would we use the lecky to power ground/air heat pumps? Then you only need circa 1/3rd the power while it cools the atmosphere :)

The GWR region electrification is billions over budget, which will take a lot of carbon heavy economic activity to repay. And then there are the power station closures....

These are not the light, fast and energy efficient trains needed to be green.

I use air source and while happy (ish)with it the initial cost compared to GCH is steep and teething problems still in evidence.

MacKay (whom I knew) was indeed well-balanced and sane, & much lamented when he died at a ridiculously early age last year

As Kev points out - the efforts to become 'green' undoubtedly absorb all benefits. It's like money is an irrelevance yet it's the greatest mechanism of efficiency we have.

The reason for the railway electrification cancellation is more prosaic. The nationalised Network Rail gold plated the scheme and let costs run wild. By all accounts the most expensive cost per km of any electrification scheme of any in the world by a huge margin.
And it's running two or three years late, with more slippage anticipated.As a railwayman myself I despair but it's par for the course with NR, who once overpaid my company £400k and didn't notice until we threatened them with legal action if they didn't let us return the money (It's actually fraud if you keep it knowing it ain't yours).
The only worse customer was Transport for London.
Interestingly, the hyper expensive new electric trains, (procured by HMG) that nobody wanted, carry Diesel engines around at great cost in complexity and fuel consumption, meaning that NR can use this secondary power source to relieve them of the need to finish the electrification of the whole route as planned.
Of course you could have done the whole fleet thing for a few hundred million by simply fitting an electric loco in place of one of the HST power units but hey, it's only tax payer money that they are p1ssing away.

What the Greens never mention is that all renewable energy needs fossil fuel backup to ensure we have power whatever. Even better, they don't mention that we also have to massively subsidise that as well, as they are hugely uneconomical when not used.

FUBAR. Of course, we citizens are no more than ATMs for the state now.

Anon 11.00 - I can see why they re-nationalised NR, but even in the Railtrack days the number of orange vests at any one time sat in a van reading the paper was always several times greater than the numbers on the track. So much for private sector efficiency.

All good points. The muppets are also staring to realise that their much-hyped road switch from petrol to batteries - and their optimism as to the speed of this is beyond insane - will also need all those gigawatts of calorific organics replacse by power in the grid.

I still go with coal. Or rather the 'town gas' splitting of heated coal into methane, hydrogen and CO; methane can go straight into the gas grid, H to power clean road vehicles and we have to hide the CO somewhere. Coal mining is a natural for robots - not a single person has to go underground any more - and we have billions and billions of tonnes of the stuff. Perhaps we can put the CO back down there.

I also keep an open mind on global cooling as being just as likely as the opposite, even though the Thames will never freeze again (too deep and narrow now thanks to Bazelgette's sewers and no huge obstruction such as the old London Bridge to slow the water down) we may not have seen the last of the 'frost fairs'.

Global cooling could well happen in a few million years.

Right now, the big problem is CO2 and Methane in the atmosphere.

While it is true that we have plenty of coal, we also have very large amounts of part-used nuclear fuel stored at Sellafield -- enough to last for a couple of hundred years, I believe. No need for expensive mines. Nuclear is a more reliable source of base load power than coal, and very much less polluting.

You can use electrical power from nuclear to get Hydrogen from water, for transport.

Think we should have nuclear-powered trains.

Nuclear powered submarines are well proven, and the same engines could easily be used in trains.

as I recall, the 'Crablogger' (in Thunderbirds) was nuclear-powered ...

Electro-Kevin said...
This comment has been removed by the author.
8:45 pm

A secondary issue with getting rid of HSTs is that they need to phase out slam door stock.

I happen to think that an updated version of the HST (using the virtually new MTU engines) would have been the way to go.

Strategic passing loops, extended platforms, increased fleet (updated versions of the Sprinters too) ... these would have delivered capacity, speed AND greater green efficiency at a fraction of the cost.

Just my opinion of course, shared by many I know. The HST is popular with both passengers and crew - the heart sinks when travelling passenger and a Voyager pulls in.

Maybe someone is waking up to the fact that if everything in the country is converted to electricity there isn't going to be enough to go round.

Unreliables just don't cut the mustard and their use has forced, via subsidies and preferences, reliable power generation to become uneconomic. It is possible that some of the green advocates in parliament are seeing the future with lynch mobs out for blood when power is rationed and costs something like £200 a kWh (at that rate you don't have heating and you don't charge your electric car).

Another good example of nuclear powered trains appears in 'A Transatlantic Tunnel - Hurrah' by Harry Harrison.

There is only one reason I would agree with changing diesel trains for electric.

The need to get them to fuel points overnight. I was shocked by the amount of night duty when I first moved to my diesel only depot. In London (electric) we managed to run a very late/early service with few night duties - this because electric trains can be stabled and prepped just about anywhere.

With diesel there are a lot more wasteful empty coaching stock moves.

will solve all problems.

Obvious from the outset. And certainly not while we are importing people apace whose sole ambition is to increase their personal consumption beyond their own country's limits.

the R4 position is totally incoherent.

The country is run by people who sound and look right but are very stupid, or deceitful, take your pick.

You guys must have been day-dreaming of the appropriately named "Tory-IIC". Not imaginary, but a real nuclear power plant mounted on an railroad truck - in 1964 when everyone was crazy about nuclear stuff.

There's a picture of it in the Wikipedia "Project Pluto" article:

It was a research project on nuclear powered aircraft engines. To test it was mounted on a railcar. Not clear if they ever let the brakes off on it!

A GWR steam engine designer would almost have felt at home with it!