OK, so I am in Ireland just now, working (as ever) on an energy project, which requires me to grapple with the electricity market rules that will be coming into effect in a year or so when the two parts of the overall Irish grid system (North and Republic) harmonise into a single market regime.  Needless to say, this will be broadly along the lines pioneered in the rest of Great Britain nearly 20 years ago, with some very excellent new Irish twists, such as: wind farms must take their chances in to grid along with everyone else, and pay for their own imbalances.  Fair play to the lads! - we could benefit from that here.

And here's an extract (I think it's in gaelic). 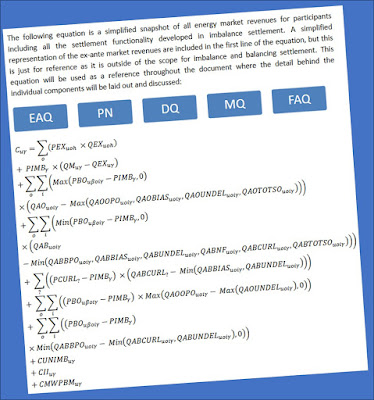 Still, that is the simplified version, as they say.  Wish me luck, boys, I'm going in ...

I read somewhere that the Irish windmills are all indoors to prevent them getting wet.

I read the Australians are offering an immediate Brexit release trade deal.And Trump promised the mother of all deals. And I heard the Chinese are offering a trade deal for whatever we want from the world's factory.

What can say except -
https://tinyurl.com/y7n2vr6v

or as the Aussie mechanic said:


Just give me another minute...


I assume everyone spotted the mistake in line 4.

I read that electricity is regarded as "goods" under WTO rules. Will the electrons be subject to random customs inspections post Brexit?

you misread - probably because it is the regulators _simplified_ equilibrium.

The more mumbo jumbo the science, the worse the outcome for the consumer!

It has to be said, poor Theresa's not a lucky general. "Events, dear boy, events"

Reading a black guy's twitter this am, he thinks it must be deliberate because "I've never heard the phrase". Well he wouldn't, would he? Very bad form to say that in "mixed company". Anne Marie Morris looks archetypal Nice White Lady, sure she's mortified.

She's public school (Bryanston) and Oxford. I wonder if some subconscious demon thought it would go down well with her deplorable constituents?

Anonymous @ 10.56
The correct version should have been 'tinted gentleman in the bio-mass fuel supply'

In gaelic, Negh-aerh is structural timber harvested when the moon is waning; dense high grown Larch so cut in the steepest part of the lunar curve - the same as tidal rise and fall - is substantially non-reactive against fire and flame, and used traditionally for barns and domestic roofs. Folklore has been empirically tested (1) and the fireproof properties of Negh-aerh timber well documented.

It is important to keep such timber away from wood fuel intended for heat and power. Even contamination of 10% amongst 14% moisture dried Red Beech, for example, will reduce overall calorific efficiency by up to 60%.

Hence the old gaelic saying 'Beware the Negh-aerh in the woodpile.

I'd completely forgotten about that 42 comment
Lesson: Do not surf and make comments after a long evening on the booze :)

@Timbo - sage advice, not yet taken on board!!