'Green' means nothing to Modern Man

Readers will know I sometimes pause to take pictures out of the window during my travels, at goings-on that catch my eye.  Yesterday's photo opportunity was in a new Dutch business park that wishes to be known as a paragon of ultra-green practices.  Out of the window I espy this git, whose task seems to be to use a leaf-clearing blower to remove a large quantity of sand off a flat roof.  He appears to be trying to blow it, thoughtfully, onto the ground / vehicles below. 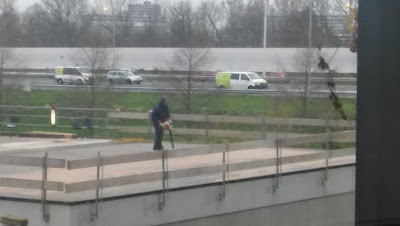 Whatever he thinks he's doing, he's useless at it.  Every time he corrals some of the sand with his blower, he waves the thing somewhere else and the first bit of sand is disturbed again.  Back and forth he goes, making no significant headway.  Either he has no idea how to use his 'tool', or it's the wrong method.

After 20 minutes of this nonsense, operative #2 appears with ... a broom!  He gets to work, evidently making excellent and steady progress - their relative achievements can be clearly seen in the picture below.  He shovels the sand that he's methodically mounding up into a wheelbarrow, instead of idly over the edge.  They stop to have an argument.  Broom-man prevails, and they finish up in no time, with almost all the sand in his barrow, available for recycling. 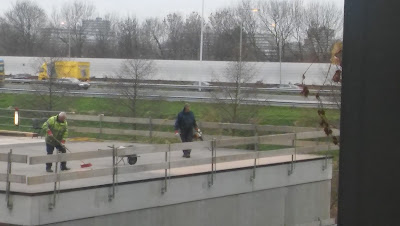 My observation is that Modern Man has a strange sort of stupid pride that says - using a broom is beneath me: I must be given a power-tool !  Funnily enough, I'm also willing to bet it's more effort waving that chunk of a leaf-blower around for an hour than it is spending 15 minutes with a broom.  But, obviously, it's somehow demeaning.  So capital equipment must be furnished, and electricity consumed.

It goes without saying, Modern Man's Stupid Pride has consequences a lot less *green* than broom-man's approach.  A plague on oafish Modern Man - and the lame management that panders to him.

Doesn't sound like your time was terribly productive either !

I'd finished supervising the paint-drying

Nor to Modern Woman - I know a young lady who thinks that livestock farming is wrong because of all the methane the animals produce, but who is also perfectly happy to jet off to Bali or Sri Lanka, the return trip per head consuming about 900 litres of jet paraffin, or about 5 months worth of my central heating oil.

The Guardian today features "where to go in South America".

Worse. Sponsored (by us) school building trips middle class kids do in Africa. Then they come back and expect us to defer to them like they're missionaries.

A plague on oafish Modern Man - and the lame management that panders to him.

Maybe modern man shares your feelings towards his managers and this was why he wanted to blow all the sand onto their cars?

Pure laziness. A broom, shovel and wheelbarrow require some physical effort. Not much by historical standards but by todays its hard labour. Far preferable to stand stock still waving a power tool about while pulling a trigger.

I miss my leaf sucker.

Used to look like a ghostbuster when I had it on.

What do you shoot with anyway ND? Are these taken at distance with one of those compact super zoom cameras or snapped from your phone and cropped a lot?

Sand on a flat roof and a blower.

Was there an airport nearby ?

Perhaps he was creating a picture of a giant cock. Well. That's what I'd have been doing.

Electro-Kevin said...
This comment has been removed by the author.
5:38 am

Generally the reason we put a white spar or quartz (sand) covering over a bitumen covered flat roof is to reflect sunlight - helping limit solar gain to the building, reduce thermal expansion and lengthen the economic life of the roof. So unless this sand is replaced, they're buggering their building.

And yes, Homo Cordlessensis is firmly established. Crafts and trades under about 35 who use cordless drill drivers, saws, grinders, hiltis and so on with skill, verve and aplomb are frequently (unless Polish or eastern European) completely unable to use simple hand tools correctly. Claw hammer, mallet and chisel, hand saw. I've had to show a man of 40 how to hold a hammer by the bottom of the handle rather than the shaft nearest the head, and seen grown lads unable to cut a piece of lumber with a short site saw, but the 'chippie' laying floorboards was the ultimate.

I caught him screwing the first board down to the joist. I told him to take it up, cramp and re-lay with cut clasp nails, 3 kilos of which I'd already given to him. "Can't be done" he protested "I've already been down to the hire shop and they don't do an air nailer for that kind of nail".

What do you shoot with anyway ND?

nobody seems to mind

Best trade it for an entry level model and a sharper lens then if you ask me.

I can understand leaf suckers but leaf blowers are just a make work waste of time.

@ I set up at the window with a big tripod and a top-of-the-range Canon EOS, nobody seems to mind

I have a tripod with binos fixed to them at my back window. We overlook houses.

(To look at the moon as it nears the horizon.)