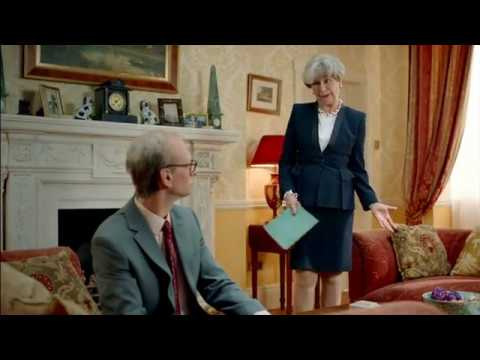 Theresa May returns to her flat at Number 10. After a hard day settling the Brexit negotiations she is keen to discuss her triumph with her husband Philip.
As she enters her apartment her husband looks up from his newspaper crossword and greets her cheerily.

"Hello dear. Did you have a good day at the office? anything exciting happen or just the usual daily drudge. The dull, grey suit, shuffle?"

Theresa looks crossly at her spouse. "Oh Philip, really! I've been at the brexit summit. The EU talks! "

"Really? He looks mildly puzzled. "There was no mention of any brexity, dealey, summity euro thingy on any news today. I've had the wireless on this afternoon. There was a play for today on 4. About a slum Tory landlord expelling Eastern Europeans from his buy-to-let. And they all perished at Grenfell. ...Or was that yesterday? Or the day before..Come to think of it..it was everyday this week. Or a version of that theme...Did you catch any of it, dear?"

"What ..No mention?" Philip thinks she looks completely bewildered. Even more so than usual.
"But..I had...A press conference..and ..made a speech.."

"Did you?" he lifts up his paper again to peer at the clues.."Was it live...the main event..not just a Euronouncement. No one covers those anymore. Not even the Huffpuff bother.."

"No! It was the proper thing. With the EU negotiators. We stood on the steps and everything..I just can't..believe..it.."

Philip drops his paper to the sofa and hops up to hug her.

"Only teasing, old fruit. I saw it all on Sky Snooze. And jolly good it all was, too. You especially."

"Oh, thank goodness. Oh Philip, don't prank me so."
But she is too relieved to be angry with him for his joke. It would be just like the media to have made a huge splash about the early week disasters and then put the hard won agreements on the back page or the final segment before the weather.

"Sorry dear..Just my way..here, I'll fetch you a drink..The press office summary is on the coffee table. They seem ..pleased...ish."

Mrs May picks up the press releases and nods approvingly. They WERE good. Success this. Not failure that. Less expensive than Trident had been crossed out to less expensive than HS2. Which was a good thing. Though best not to mention either.
Still. Very good news. very satisfying indeed.

Philip handed her a sherry and sat back down on the sofa.
"The media said you had a pretty good deal today. Even the newspapers said you did a good job."

"Well, it's about time the UKIP-Brexit red tops gave me a little credit for bringing about our leaving the EU."

"Oh, I didn't mean them, old stick. I meant the Remainer media. BBC very supportive. For a change. Guardian loved it, too. Full editorial and feature pages. Lapping it all up..in their whingey-wailey, doom averted way."

"Oh." She said. And sat down onto her favourite chair. "Well...All publicity is  good publicity, isn't it?"

"Indeed it is, old sport. A triumph! Speaking of which, and not trying to steal your thunder in any way, but..I did have a bit of a triumph in the negotiations department myself, today," said Philip. Waggling his eyebrows over the top of his glasses and looking particularly pleased with himself.

"Really?" Asked Tess. Wondering what he could have done that would be the equivalent to leaving the European union whilst not snapping off the two extreme, irreconcilable, wings of her disconsolate party.

"Yes, indeed I did. " Philip leans forward and winks conspiratorially at her.
"I went to that new Lidl, off the Horseferry road. And while there I saw a sign "THREE, Mörök Háború for the price of one! How about that, eh?" And he nods and smiles.

"Mörök Háború," he corrects.  "It's Hungarian brand Toilet-Duck. But as good as our SC Johnson stuff here. And I got three, for the price of one.! Good , eh?" he exclaims in jubilation.

Theresa regards him with incomprehension.
What is he talking about? Toilet Duck? TOILET DUCK?
Impatiently she asks

"How is three bottles of Mangy Toilet Duck relevant to...what I achieved..today?" And she slips off a shoe and rubs her sore heel. And rolls her fingers over the bunion that that some photographer had stepped on.

"Well, old skirt, in and of itself, not so much. Three for one is a good, if not outstanding deal. But the clever part was, I noticed there was no Ce mark on the bottles."

Theresa looks even more confused. She is tired after a very long day, and an even longer, stressful week. And in no mood for riddles. "Ce mark?" she manages to ask.

"Yes. You know. The approved for sale in the European union, registration symbol. Well, these bottles didn't have it! Hah! So I point this out to the deputy assistant supervisor. And she gave me TWO more, free bottles. So there. What do you think of that?" And he sits back comfortably, evidently pleased with his feat.

Theresa is getting annoyed. Is he doing this because she is a woman? Deliberately belittling her achievements just because she doesn't know who Westhampton Rangers beat in the 1976 World Club?"

"Philip, " she says through thinning lips, and over the rim of the deep gulp she takes of her Sherry. "I hardly think that matches the tightrope diplomacy I have been indulging in..At all.."

"Oh, no Quite..Quite..No.." says Philip raising his hands, palms open to placate her.
"I just meant that ..in essence. We both got good deals today. You got some agreements and paid a huge sum for some future possible something..While I got, Five Toilet Duck equivalent, but only paid the price for one. So..i'm just saying. We are both winners today, aren't we?"

"Philip. I have been transacting with European leaders! I have finally, on deadline day, or just after anyways, got a deal that is acceptable to all..."

"Yes..Yes..Dear..Acceptable. Oh, I so agree. I'm not knocking, really I am not. I'm just pointing out there is acceptable. And there is five for the price of one. Both great deals. No question. I am simply just suggesting one may be a little bit of a better deal than the other? "

"Oh for heaven's sake!" she curses and heads angrily off to the bathroom.
Phil shrugs and picks up his newspaper to resume his crossword. Its a toughie.
He can still hear her indignant words through the door.

"I've been working on this for twelve months. Back and forth. Back and forth. With the most intransigent men in the world. And that's just our Brexit team. And you say its just the same as getting four bottles.."

"Five bottles," he corrects her, to himself. Tapping his pencil on his lip.

"...four bottles of lavatory cleaner is the equivalent of world-stage statecraft..."

"..not equivalent.." He continues to say to himself.."Five bottles. And better than.."

"...Statecraft that takes month and months of patient, painful talks. Which results in give and take on both side.."

"..With all warring parties finally brought into alignment! And you! ..You even have the nerve to suggest that this delicate finesse was in any way of the same magnitude of a deal as buying household cleaning products from a supermarket?!"

And then lowers his voice so only he can hear himself say,
"The deal that I struck, was better than the EU one. Five bottles. And I only paid 20% of the RRP."
He fills in, then rubs out a failed clue..
"Blast ..no F in Phosphate...."

"PHILIP !" he hears a now very, very angry yell from the toilet.
"PHILIP!" Bawls out Mrs May. "This Hungarian... acid stripper ..you supposedly got the agreement of the century on, has gone and taken the lacquer off the bowl !"

" It's still a better deal."
Posted by Bill Quango MP

And so our democracy goes down the pan.

If fear a hard border with Ireland then we don't deserve democracy. With the GF agreement we did not realise that Major/Blair were selling our right to self governance.

Besides - this is to ignore the terror and nastiness that comes our way via the EU border. No-one mentions it.

To equate Saint Theresa's latest Brexit sell out with toilet cleaner is an insult to toilet cleaners everywhere.
North or, South of the fudge line!