The Chinese Are Coming? I Can't Wait

I've been to a few funerals featuring unexpected turns of events.  People these days want them to be 'celebrations', and solemnity seems to be pretty much out of fashion.  (The undertaker in our high street now offers a gigantic black Hummer-hearse with the number LA57 BYE, and you see prospective clients viewing it enthusiastically:  oh yeah, gotta have that!)

But our new masters the Chinese are pioneering something altogether more progressive: funeral strippers.   No, not grave-robbers; pole-dancers!


It has been a long tradition for Chinese rural residents to hire local opera performers for funerals to allure mourners and show respect to the deceased. By hiring performers, people can ensure a higher turnout at the deceased's funeral as a way of honoring the dead and showing "filial piety." In recent decades, Chinese rural households are more inclined to show off their disposable incomes by paying out several times their annual income for actors, singers, comedians, and - most recently, strippers - to comfort the bereaved and entertain the mourners ... Opera singers soon lost their market as more and more locals became fascinated with striptease and shibamo (eighteen touches), a traditional Chinese folk song that is flirtatious, bawdy and erotic in nature.

Eighteen touches, eh?  Well, it's what he would have wanted.

To be fair, the Chinese authorities have been trying to stop this for 12 years now - but evidently not very hard, if it's still rampant after all that time.  Any remaining humourless marxists in government obviously pick their fights carefully, and this one doesn't seem to have a particularly high priority. 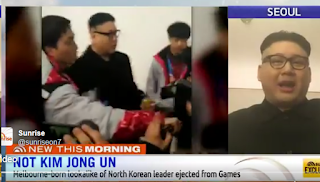 On the subject of Eastern entertainment, another great turn of events is the attendance of "Howard", the Australian Kim Jong-un Lookalike ("actually, I'm a satirist as well") at the Olympics, acting as self-appointed front-man for the North Korean cheer-leader lovelies.   He gets a kicking for his pains, but hey, what a man!  The humourless marxists have got their work cut out in the east.

As long as a funeral doesn't turn out like this.

(The congregation members are real members of the public)

NSFW or for anyone with standards. Totally off topic too.

From my childhood towns of Croydon/Sutton.

I thought that, imolation in public, bodies placed on scented wood and garlanded funeral pyres was the new in thing down the river Thames way?

Will the Triads step in?

And what about the other lot, from the Brahmaputra and Indus, they don't have much time for Hindu ritual nor indeed Hindus for that matter?

Multcult, there's no time for England.

Shocking! As a child in Singapore in the 1950s I attended no Chinese funerals, but observed many funeral processions on their way to the cemetery: extraordinary spectacle, small convoy of open-top trucks bombing down the highway, filled with hired folk bashing cymbals and banging drums (apparently to frighten away evil spirits), huge noise! Wonderful doppler effect,massed cymbals & drums fading away with the racing trucks... Might sound odd, but those folk would have found the idea of strippers attending a funeral highly indecent!