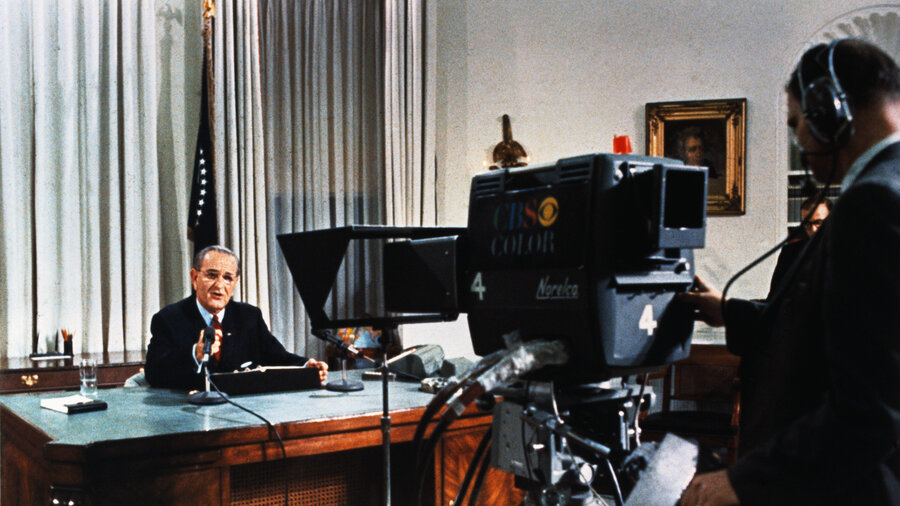 Fifty years ago President Lyndon Johnson,was surprised coming up to his renomination for the Presidency,by an unexpected challenge over his handling of the Vietnam War, by Senator Eugene McCarthy
Standing against him for the leadership of Democrats on a Peace Platform.

The Peace movement was still quite small in the US. Most Americans still supported the war. Most wanted it finished, but not at the expense of surrender. A peace candidate wasn't expected to do very well at all.

Then the Tet Offensive happened. A major offensive right across South Vietnam. Focused on the urban strongholds rather than the rural hamlets. It came just weeks after a huge PR campaign by the Johnson Administration,that had told Americans the war was being won.

The pictures on the nightly news told a different story. Bodies in the streets of Saigon. Americans under siege the length and breadth of Vietnam. Walter Conkrite, the voice of evening news America, gave his first ever personal opinion. "America cannot win."

In the aftermath McCarthy came a very credible second place to the sitting president in the New Hampshire primary.
A few days later, Robert Kennedy said he would run on a peace ticket too, so Johnson was suddenly in big, big trouble.

He made a television appearance in which he uttered a famous phrase. But just before that part Lyndon explained his view that because the Vietnam War was so important. Was so time consuming and required such focus, it was going to take every second of the President's time.

"I do not believe that I should devote an hour or a day of my time to any personal partisan causes or to any duties other than the awesome duties of this office: the presidency of your country."

Accordingly, I shall not seek, and I will not accept, the nomination of my party for another term as your President."

The War had claimed it's highest profile victim.

It is worth noting that in a sort of Brexit like frustration, a lot of the Democrats who voted for McCarthy had voted because they thought Johnson wasn't pursuing the war hard enough.
They thought Johnson too weak on war. So they voted for a peacenik ?
Yes..exactly that. Anyone but LBJ! His support was becoming narrower as he was seen as simultaneously too much pro-war and too much anti-war.

The success of McCarthy in a sort of stalking horse role is what convinced Johnson's biggest rival and sworn enemy, Robert Kennedy, to finally run against him. And made Johnson quit.

Fifty years on, another serving leader, is faced with an impossible challenge. Having to reconcile Hawk and Dove elements within their party and the nation. A challenge that sucks the time and focus out of all other agenda. That diminishes all other politics and leaves the all important domestic legislation drifting aimlessly.

Brexit is Vietnam for May. And she doesn't even have Lyndon Johnson's relatively successful domestic bills to fall back on.

The time for the leader to leave will only become more of an issue with every passing day. The time for a successor is once Brexit is done. Not immediately. But within a year of our leaving the EU.
So the new leader can have distance from the past. And a focus for the future.

There will be a feeling by Mayites that she's done.."Alright."
But, in truth, she has not.

The deal isn't the deal. Its just "Alright."
The country isn't doing well or badly. It's doing "Alright."
The local elections? Who knows? But by polling it looks like Jez will do well as this cycle favours him anyway. And Theresa might snatch a few rurals in exchange for the metropolis. Which might be 'Alright.'
And so on.

I'm afraid, Prime Minister, 5/10 isn't going to be enough. Even 6/10 with a rabble of an opposition like Momentum, shouldn't be considered a success.

So perhaps now is the time to look at 2020. To put aside all fantasies of managing to muddle through to the next election and leading the party to triumph. You had your chance.

Reflect a little now on how best to make the transition. And although very few believed Johnson's explanation for why he wasn't running again, it was a very good excuse.
And a very good speech.

"...With Britain's future facing a challenge right here at home from the failed policies of Hard Left socialism. With our hopes, and Europe's hopes, for a successful, new European partnership, hanging in the balance every day...
... I do not believe that I should devote an hour or a day of my time to any personal partisan causes. Or to any duties other than the awesome duties of this office: the leadership of your country."

"Accordingly, I shall not seek, and I will not accept, the nomination of my party for another term as your Prime Minister."

Email ThisBlogThis!Share to TwitterShare to FacebookShare to Pinterest
Labels: May

Maybe her renewed vigour will focus her mind.

She hasn’t even got the brains to do that.

The useless incompetent will cling limpet like to her position. She is that very dangerous combination of stubborn, stupid and busy.

Good idea
However
I see many McCarthys but no Kennedys

"She doesn't have people thrown into jail and tortured for insulting her."

Britain has come to something when that's a recommendation. But you can die in a UK prison for putting bacon on a mosque door handle.

But she does have people thrown out of the country for being the wrong colour.

Don Cox: "She doesn't have people thrown into jail and tortured for insulting her."

No, but she does have people thrown in jail for insulting (or even being perceived to insult) particular community groups.

All we got is Chukka and Adonis.

No, 9.39 am, she doesn't have people thrown out for being the wrong colour. Her sins are great enough without making up lies.

But ... she is in one sense, and one sense only, a very lucky prime minister, in that she has opposite her a Labour Party leader who believes that the Palestinians have had a pretty rough deal over the last 60-odd years, and who isn't afraid to express this in public.

Now this shouldn't have much to do with UK politics one way or the other - far worse should be Corbyn's benevolent neutrality towards the IRA - but for some reason it seems to matter very much to a lot of people with clout. May, Cameron, Blair all knew not to touch that third rail.

So we get non-stop Corbyn "anti-semitism" stories in pretty much all media, followed by (unsurprisingly) "Corbyn slips in polls" stories a few weeks later.

For quite a few people in the Labour Party and elsewhere Brexit isn't as bad an option as Prime Minister Corbyn. May is a lucky girl.

Robert Kennedy had had a pretty open personality war with Lyndon Johnson. They hated each other.
Bobby Kennedy had the problem that if he ran, he would be running against his own parties president.Something that just doesn't happen. {Trump will be lucky to escape someone from his party running against him}
Bobby also had the problem that by running people would say he was coat-tailing on his brother's death. And only standing to spite Johnson.
So he waited. Expecting to run in '72.

he had always been a Dove on Vietnam. Much more so than John Kennedy. His 'Peace' candidature was genuine and not just made up to attack LBJ.
He entered the race in February 1968. By June he was dead.
So we don't really know exactly what ticket he would have run on.

She doesn't have people thrown into jail and tortured for insulting her."
Isn't that like saying I am unemployed and living with my parents, but I could be dying of cancer so great.

I would like to wake up and find out that either Alvaro Uribe or Viktor Orban are half British and our prime minister.

Worth noting Jacob Rees-Mogg during the height of Moggmania said he would not ever want to be leader.And I thought he was pretty emphatic in his rejection of office.

"I will not accept if nominated and will not serve if elected."

May would be very unwise to make an "I shall not seek..." speech in advance of any moment until she actually resigns. Were she to do so, it would destroy her entire authority, as it did for LBJ.

Her real challenge is ahead of us. The shape of the Remainer/EU plan to prevent Brexit has become clear. The House of Lords has issued what is effectively a demand to stay in the customs union. That is now being followed up by an unholy alliance in the House of Commons, aiming to accomplish the same. Meanwhile, the EU contemptuously rejects all of the UK's perfectly reasonable proposals to solve the Irish border question. The only solution the EU will accept is for Ulster to stay in the customs union (the so-called "fall back option"). The rest of the UK would thus be made to do so as well, in order to avoid open war. And if we are staying the customs union, then logically the single market too ..?

It's not hard to see how these people are operating. The project is combined with a Blair/Mandelson/Soros-backed propaganda campaign in support, snidely endorsed by the BBC.

May and her negotiating team would be well advised to make no more concessions, having given away too much already. The UK should now prepare serious plans for a Brexit with no deal next March, and with the necessary WTO trading and customs arrangements already in place.