What is it with Lefties and 'Diversity'?

A good number of years ago I ran an arm of a software company.  One of our biggest clients was a German utility and I was visiting their HQ to check on progress of a very large software implementation our guys were doing.  The senior German manager who was my main point of contact asked me into his office, closed the door and said he needed to ask me for a big favour.

His company was preparing their annual report and some accompanying brochures - the usual big glossy numbers - and they wanted to show the world what a liberal, modern, progressive operation they were running.   Unfortunately ... all his staff were, ahem, German, blond and white.   Would it be acceptable to me if photos were used in the reports and brochures that would include some of my team?

It wasn't difficult to imagine which members of my team he had in mind:  Oliver, of Nigerian descent;  George (Malay Chinese); Lavanya and Nilesh and Ram (Indian and Sri Lankan).  Somehow, Alec (Canada) and Gordon (Ipswich) weren't wanted ...  Sure enough, when the publications came out you'd think the pictures had been taken in the foyer of the LSE.

I was reminded of this when onto my mat dropped the Annual Report of the Co-op (London District) of which I am a member.  No, I haven't turned leftie in my old age; it's for their rather good grocery offers.  And here is the picture it contains of their National Members' Council.  Yes, the little carrot-top in the front row is Hazel Blears. 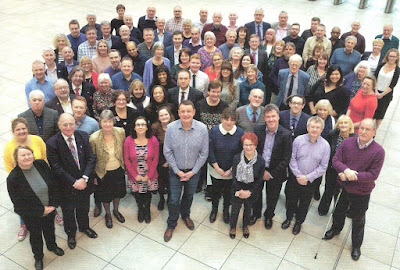 Now I thought that for a number of years it has been utterly compulsory for, well .... for Oliver and George and Lavanya et al to be included in things - particularly lefty things!  Seems I was more progressive in my nasty little capitalist software company than these gits.  People's Party, my arse.

Harbouring anti-semites?  That's only the half of it.  The left is a cosy, doctrinaire, white middle-class club - redheads don't count, BTW Hazel - that exists to tell everyone else what to think and do; a great deal less representative than the Tory Party it affects to despise.  My local Conservative Association would no more publish a photo like that than fly over the moon - it couldn't, because that's not what we look like any more!

Email ThisBlogThis!Share to TwitterShare to FacebookShare to Pinterest
Labels: Lefties

Is the Co-Op left wing ? How about the John Lewis Partnership ?

I think these are both good old-fashioned British organisations, like the Women's Institutes or the Salvation Army, which have been around since before living memory.

Diversity has gripped advertising. The only role for a white male is as the fool.

The pragmatic Conservatives understand the commercial future in diversity.

Plus Conservatives are nicer people. The Left are usually capitalists in denial. They seek privilege and then deny they have it and stop others having it.

Formally-speaking, and by long tradition, categorically Yes. No doubt they are broadly on the 'cuddly' wing of the labour movement but lefties they definitely are

"In 1917, the co-operative movement decided to establish the Co-operative Party as the most effective way for it to have a political voice inside parliament.

The Co-operative Party does provide some financial support to the campaigns of individual MPs and Councillors. These candidates are separately selected by local members of both the Labour and Co-operative Parties, and therefore stand for election as ‘Labour & Co-operative’. There are currently 38 Labour Co-operative MPs."

I've been saying for years that capitalists don't practice taste discrimination (except for the smallest mom 'n pop enterprises), taste discrimination being discrimination on the grounds of class, race, faith, creed or sex. Thus the whole raft of equalities legislation we have is not aimed at propah capitalist enterprises but at the public sector - otherwise free to indulge their prejudices at the taxpayers' expense without having to achieve either effectiveness or efficiency.

The Co-operative movement is frequently a comfortable home for bien-pensant middle class suburbians, and none the worse for that, except it's usually 'hideously white' to coin a phrase.

In the solid Labour London borough in which I lived for many years all the refuse crews were either from the same extended (white) family or those married into it - jobs on the 'refuge' were hereditary, with the senior members maintaining a family waiting list. Jobs were closed to outsiders. The council and its unions were quite happy with this - Trad Labour has nothing against nepotism. It was the lousy CIPFA comparative performance indicators that eventually broke the cosy job-and-finish arrangements for the borough's highest paid unskilled manual workers ...

The notion of the 'closed shop' once so openly beloved of Labour hasn't gone away - but we've tamed it a little with equality laws. Of course it would be easier to force the public sector into economic efficiency, but that I fear is a step too far.

This guy has the measure of the lefties. He's made quite a few videos that are on YouTube but here's one that nails their visceral hatred of the success of capitalism and those who have benefited from its success:
https://www.google.co.uk/url?sa=t&source=web&rct=j&url=https://www.youtube.com/watch%3Fv%3D9SUccB5xitg&ved=0ahUKEwj3opPN3vXaAhWHIMAKHesKAywQt9IBCHwwFA&usg=AOvVaw0PVBtHRGKh_DVb21sgBd1h

Nietzsche's ressentiment diagnosis is indeed highly insightful (though, as with many things, he pushes it too far)

a parallel aspect of the squalid nature of much of the Left is what I call the transgressionist tendency: a deep, (not even always sneaking) awestruck admiration of people who are seriously up to no good, misbehaving in anti-Society ways they'd love to be doing themselves - if only they had the balls

this goes all the way from veneration of travellers (who on any logic ought to be anathema to the Left - and indeed, are exactly that to a lot of more thoughtful lefties) to idolisation of terrorists. Oh wow - people who are actually willing to use ... violence!

Marina Hyde has written well about this:

I am forever in trouble with the diversity brigade at the office. I don't play the game so any missive sent to me is copied to the CEO to, in order to make a point.

Then one recent day, the Diversity head happened upon a conversation with a member of my team and was whining about why I was so horrible to her and generally was an evil person.

He merrily pointed out that in the time he had worked for me he was struggling to think of a race, gender or nationality I had not employed in the team - even him, a redhead! Of course, he had seen that, as per ND, all I ever did was hire the right person for the job and there it ended, no further complex moralising is necessary in business as long as you are honest in hiring the best available at all times.

She likes me even less now of course, if that is possible. Capitalism after all, is the enemy of prizes-for-all-diversity.

Hazel Blears. The Minister for Telling the People what the People Want. Not missed...

Stephen Hicks book on Postmodernism essential reading for all who want to know how we got here - especially WRT to the rotting carcass of academia, hollowed out by this toxic shit.

Not to put too fine a point on it.

Thats because there's only 8 of you.

ND, in recent times the Co-operative Party has been a big time backer of Blair and supporters. So this question boils down to do you consider New Labour was left wing?

Seems to me the New Labour MPs knew where the good sources of financial support were, and were good at hooking up to it. I'm sure the Co-operative Party is now beginning to lose its Blarite stripe, but it has a long way still to go.

One should not forget the Co-op Bank which has been a major financier to Liebour(on favourable terms if I recall correctly.This probably continues even after their enforced restructure.
This would be exclusive of the support provided to the individual MP's.

The left wing concept of "diversity" seems to mean including everyone except Jews.

Somebody should take a few of those black Ethiopian Jews to a Labour meeting and see how they're treated.

Could it be the same reason there is a shortage of diversified blood and organ donors ?

Most involved in politics do so altruistically. A few at the top make money from it.

"Could it be the same reason there is a shortage of diversified blood and organ donors ?"

I've heard that that is true. I assume that it's donating they object to, not receiving?

Do you by any chance have a link on the topic?