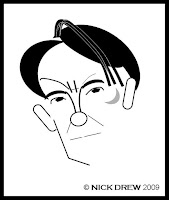 Way back in 1997, the year in which the first Blair government was elected, Peter Mandelson wanted to be elected to the NEC of the Labour Party.  He wasn't popular enough for this to be any kind of shoo-in (to put it mildly); indeed, the Labour Party is fairly averse to johhny-come-lately just turning up and expecting to walk it, first time of asking, onto the NEC.  So he called in some of his plentiful markers in the telly-meejah, and pitched to the tame interviewers thus:  (I paraphrase, but on the basis of a very clear recollection)

"Now what I think Labour Party members are saying, they say - that Peter Mandelson, I don't know much about him, but I do know he had a big hand in getting the party elected, and I like that.  But I think he needs to be more accountable to the membership.  So I think he needs to be on the NEC, where we can keep a democratic eye on him.  - That's what I find Labour Party members are saying."

Never short for a bit of self-serving spurious logic, are you Mandy?  Two decades on, and nothing has changed.  Today, for example, attempting to promote a second referendum he


... put forward a new argument in favour - that it would be helpful to Theresa May too.  He explained: "People know want to make an informed judgment and choice between what is on offer as a result of this negotiation and the benefits we already have in the European Union.   Also I think, if [she] promises a people’s vote, it will strengthen her hand against the Brextremists in her own party.  She’s got to turn around to them and say, ‘Look, what I negotiate has got to pass muster.  It’s got to gain the support of the British people.  So untie my hands, let me negotiate properly, because you’re going to face a public vote at the end of the day.’  And unless she can say that to them, they’re going to continue keeping her hostage ..."

Oh so bloody clever, Peter.  She'll definitely fall for that.  Anyhow, gives me a chance to re-run one of my digi-gallery.  By the way, he never did get on the NEC ...

The person who did win was Ken Livingston, the man who talks a lot about Hitler.

Where did Mandelson’s money come from?

hate Mandy's politics, but wish though that there were people with his brains and savvy at the controls now.

Mandelson is head of the Alpha Lodge. Basically numero uno satanist in the UK. And you thought the Prince of Darkness moniker was just a .....

"hate Mandy's politics, but wish though that there were people with his brains and savvy at the controls now. "

Are you sure about that CU? I can see that he was an effective - if slimy - political operator, but what did he achieve that the average British citizen would experience as an improvement in their lives?

To me he seems like Blair. Good at playing the political games but useless (or worse) in the real world.

He the feller who had all those links with evil Russia?

A master in political maneuvering whilst being utterly shit at making a country work.

Parliament is a playground for such people. Running a country comes a very poor second task.

He's even more slimy (and vile) than Tony Blair if that's possible.

PS I wrote this before reading Y Ddraig Goch above who says some of the same much more eloquently.

5ways Brexit could affect your holiday.

Everyone forgets how to make a sandwich.
VD will be uncontrollable after Brexit
No blood for surgery
No aeroplanes will fly ever again.
500 mile queues up the M20.

Every day.
The drop. Drip.Drip of bad news. The Daily opinion softener in the wash cycle.

Who do we imagine is behind this?
Who still has the power and skill to feed all the media organisations exactly the silly season story-drug they crave?


Next we will hear how we wont be able to import Lager before it goes flat.

Quite seriously, several million people voted for brexit despite being told they will be worse off if they do.
If that comes to pass no-one can be surprised or upset.

Endlessly repeating "you didn't want to do that" / "told you so" gets old very quickly (even to those on the remain side).
... and then people like Mandleson wonder why no-one is listening.

Just you wait for the balsamic vinegar drought of summer '19

Why would we be short of balsamic vinegar, or anything else ? A no-deal exit does not require Britain to pile any tariffs onto any imports at all.

Are people claiming that the EU will apply export bans ? Or sanctions ?

Much the same at the Irish border. Britain doesn't have to build any fences, custom posts or watch towers. We can simply do nothing. If the EU want a border, they can build and operate it. I doubt if the people of Eire will be pleased.

I doubt if the people of Eire will be pleased.

We won't be pleased.

Why balsamic vinegar
... because the eu will apply sanctions that target the metroplolitan elites.
Obvs.

The average age of a BBC viewer is 60 and I bet it's even older for the news. So I doubt they're changing any minds.

I haven’t watched bbc news for years.
Years and years. Or C4 news. Or itv. Or sky.

Who does watch these programs? And are the bbc still budgeting News as the biggest item in their empire?

I had the (mis)fortune of watching Mandelson give a speech about Brexit last year.

I did manage to get this photo of him, and what a tongue he has...

Anon 9.24
And God only knows where it has been.

I reckon we'll be using that photo again, anon!

@ And God only knows where it has been.

Mandelson was the man who boasted that the New Labour government "went out around the world, and beat the bushes" to find immigrants to fulfil Labour's Voter Import Scheme.

The results we can now see in almost every town and city in the kingdom.