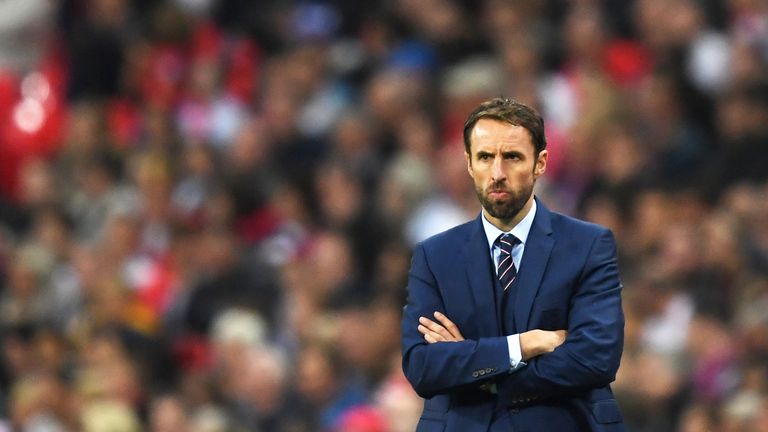 With the notorious aversion to the round ball game that our readers show. Their contempt for the overpaid divers and wrestlers of the soccer match, we have not yet mentioned the largest global event occurring. The 2018 World Cup.
Partly, because like everyone else, we didn't expect to do very well.

Gareth Southgate was not a choice for the many. A bit of a Theresa May. A competent, safe, if dull option. As the more dynamic were far more of  risk.
But we'd just had two safe option managers. Steady Eddies. And both ultimately failed, spectacularly, when the test came.

I do believe that this time, the England manager does actually know what he is doing. Does understand that he needs to ensure his team also understand what they need to do. This isn't simply a Sven 'Pass to the good players and they will score.' sort of team. For one thing, Mr Southgate only has one really good player. A clutch of competent ones, but the Beckham/Lampard/Gerrard/Terry/Rooney/Cole/Owen era is over. Which may be a blessing in disguise.

By having a younger, fresher, less historic side, he has been able to get them to believe what he believes. To play how he wants them to play.

This is no mean feat. Better managers, with higher pedigrees, with better players, have not managed this. The 'no plan B' has been as evident in England football as it has been in Mayite politics, Hoof and hope. And if the ball doesn't go in with that tactic..then do it again. And again. And again.

Those who actively follow will be aware that under the usual and deserved media hype, the actual stats haven't been that impressive. Total number of shots on target, against Columbia, was two. Out of sixteen attempted. Possession was 52-48%. Not overwhelming at all.

But what was different, was the evidence of an actual plan. An actual doctrine. A passing structure. That didn't always work, but at least was in place. So many times before when watching England at a major tournament, could be seen the unbelievable, unnecessary giving away of the ball. Giving away and not seriously trying to come back and defend. Instead waiting for the ball to come back.

The giving away still went on. But the defensive shape, so beloved of pundits, was obvious even to ordinary fans. The alternative routes available to play the ball was also obvious. This, finally, looked like a manager's plan. Where the players play in their best positions. To a system that suits the entire team, rather than the superstars in that team.

And in the extra time, and the shootout vs the Colombians, the pre planning really showed. Not a panicky..what now? Who takes? So and so the winger is really tired so i will put a defender in the same place because he once played as a winger in a friendly twenty years ago.

For once, it actually looked ORGANISED. Not organised for the media. Or the FA. Or the players. Or the wives and tabloids.
But the team.

So, whatever occurs next, full marks for that.
Posted by Bill Quango MP

Southgate is playing his weak hand intelligently. Good for him.

Agree with everything that was written.

But in every game, you can only win by scoring.

And goal scoring talent is where England is seriously lacking.

Doesn't matter how many goals you concede as long as you have more than the other team.

They should be aiming for set pieces and corners as that looks like the most obvious chance they have.

Diving is a tactical part of the game and I don't think that footballers are overpaid in the slightest. *No sarcasm* They have reached the top of a very high pyramid and can be knocked off in a bout of poor form.

Modern training regimes are punishing and entail much deprivation in privacy, food and drink.

I say good luck England ! We need this fillip now.

A bonus is that the Leftists HATE England success and view it as White Van Man Brexit culture - ignoring the fact that football has done more for multiracialism in Britain than decades of social engineering.

To quote one on Jeremy Vine (R2)

Remainer "I want England to fail. It is White Van Man and Brexit and they love England. I want them to have no pleasure for what they have done to this country. England going out first and two European sides vying for the World Cup would be a beautiful metaphor."

Vine "By that you mean men that we now call 'gammon' ?"

And so E-K finally got into football.

I do not think this is their year but one more win will do for me.

Good points Bill. Whilst there is the media driven hysteria - whether we progress or not- it does seem now that there is a sense of realism about strengths and weaknesses in the air rather than hollow bravado.

Personally don't think we can go all the way but this team has an assurance of purpose (despite it's many failings). It's almost as if there is that faint and subtle scent of underlying success somewhere nearby.

Like others I have loved the fact that we have progressed in the manner we have has seen the Guardian types (excepting a good porton of it's sport section) and other bien pensants look like they are eating a sh*t sandwich.

Some of us love football, hence me being at Anfield as often as possible and enjoying this world cup with my very excited kids.

May is playing her weak hand intelligently. Good for her.

Like others I have loved the fact that we have progressed towards Brexit in the manner we have has seen the Guardian types (excepting a good portion of it's sport section) and other bien pensants look like they are eating a sh*t sandwich.

It is White Van Man and Brexit and WVM loves England. I want them to have no pleasure for what the Remainers have done to this country. England going out first and two European sides vying for the World Cup would be a beautiful Brexit metaphor.

Doesn't matter how many red lines you concede as long as you have less than the other side.

England are actually in with a shout in a World Cup where Germany, Italy, Argentina, Brazil, Holland, Portugal, Spain are missing or eliminated. While the games have been entertaining (more so than usual IMHO), there are no "big teams" left save perhaps France.

Trouble is, if an England team with approx 50% non-native ancestry win (not impossible IMHO), we will never, ever, hear the last of it from the BBC and Guardian. I remember their glee last time France won, just before 'youths' started burning cars all over urban France.

PS - someone set off the fire alarms in the Swedish hotel early this morning.

"Some of us love football, hence me being at Anfield as often as possible ...": that's all very well but what about the poor sod who loves football but supports Man U?

Still, I suppose he could always support Man C for the football and Man U for the sandwiches.

"I do believe that this time, the England manager does actually know what he is doing. Does understand that he needs to ensure his team also understand what they need to do."

E-K - I find it rather sad to see a sea of pink arms and torsos in Russia, following a side that's 50% brown/black. I guess that's the same in the USA, where good old boys love them some college football.

I seriously don't think people see colour, especially where they were brought up with it like most Londoners (me.)