Alex Salmond Rails Against 'Process' ... Natural Justice is the Serious Issue at Stake 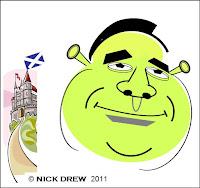 For obvious reasons, I won't say it's all a bit fishy ... but it is interesting.

On Sunday, at BQ's BTL suggestion I'll be reviewing the stage version of Imperium, Robert Harris' masterly retelling of the story of Cicero, 'father of the Roman nation'.   In them days, it was absolutely routine for politicians, serving and retired, to be prosecuted for something.  Bribery and corruption loomed large, of course, but almost anything could be dredged up - or made up.  Most of them seemed to be guilty of so much, the need for outright fabrication wasn't too great; just a little embroidery, perhaps.  How unlike our own chaste times ...

Anyhow, to Alex Salmond.  Upon the accusations against him being made public, his actions and carefully-worded interviews suggest he reckons his best course lies in attacking the 'process' to which he's being subjected.  It flies in the face of 'every law of natural justice', he says.

Actually, there are only two laws of natural justice: nemo iudex in causa sua, and audi alteram partem (and they go back to Cicero's day, too).  Personally I'm very keen on them, as should anyone be who values freedom and rule of law.  But they are under attack.

Why do I say this?  Because the other day I chanced to look up what Wiki says on the subject, to find this:


While the term natural justice is often retained as a general concept, it has largely been replaced and extended by the general "duty to act fairly"

The point is this.  When the 'intersectionality' and transgender headbangers let rip, their primary thesis is that their self-identified status and self-narrated 'lived experience' cannot be gainsaid.  But of of course our two loyal friends the LoNJ blow this clean out of the water.  We can justly scrutinise, challenge, and if appropriate deny, their self-identified anything; and they are not themselves the final arbiter of the matter.

But if we fall back to a general duty to act fairly, they will play the "oppression" card and claim it trumps everything else.

And so, notwithstanding I despise the old charlatan, I wish Salmond well with his procedural challenge.  Let's see where proper due process gets him.

There is no more a "natural justice" than there is a "natural right". However, suitably relabelled, the Roman desiderata seem a bloody good idea to me.

So like you, and also reluctantly, I shall be shouting for Salmond. There's a first!

I once heard Enoch Powell say:

Salmond has supported this bloody lefty nonsense throughout his career. Serves the bastard right.

Having said that, the bar is very low for sexual misconduct in the workplace - as it should be IMHO. Those in positions of power/responsibility should be held to a very high standard.

We are very lucky indeed in this country to be able to challenge almost anything the state does, and often successfully. A colleague has been caught in a silly Home Office procedural trap - it turns out along with hundreds of others. It is now being fixed because a trapee forced it to be. I wonder whether that could happen in most of the world?

Funny how he's gone all keen on due process and innocent-until-proven-guilty, all of a sudden.

I don't remember him (or anyone else) being so keen on those points when it was Kevin Spacey, or Rolf Harris, or any one of a thousand others, in the spotlight.

The biter bit, the hawk under the eagle's talon, the spider caught in the web of steel, etc etc.